Published in the Civil and Military Gazette (CMG), 15 September 1884, with the signature “E.M.” Pinney in KJ 372, writes of this signature:

The initials stand for “Esau Mull”, a pseudonym that RK had used from May, 1884. It is the most frequently-used of his many pseudonyms, for he typically used it to sign his many “Week in Lahore” columns. A ‘Mull’, short for ‘mulligatawny’, is a slang term for a Madras civil servant. ‘Esau’ presumably stands for ‘exile’.

The poem is further authenticated by its inclusion in Scrapbook 1 of Kipling’s own press cuttings (in the Kipling Papers at the University of Sussex Special Collections). The poem was never collected by Kipling but is to be found in Rutherford (p. 255) and Pinney (p. 1732). 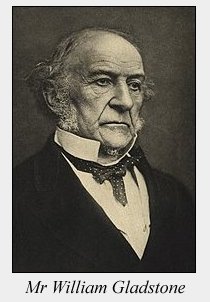 In the 19th Century the Tories were the party of the landed interest and imperial expansion. Under Gladstone, Prime Minister for four terms from 1868, the Liberals were the party of Parliamentary reform, Home Rule for Ireland, and a general interest in greater self-government for the peoples of the Empire.

When he came to office in 1880, Gladstone appointed Ripon, who had a long political career as a Liberal politician, as Viceroy of India, with a brief to give Indians a greater role in governance.This was far from welcome to the Anglo-Indian community who were Kipling’s readers in the Punjab, including his father, Lockwood.

Ripon resigned from his vice-regal appointment before his five years were up. His credibility had been undermined by the prolonged controversy over the Ilbert Bill (which provided for Anglo-Indians to be tried by some Indian judges) and the Government’s eventual capitulation. However, he continued his political career in England in later Liberal administrations.
For other poems by Kipling about the Bill, see “A New Departure” and our notes on the background to the Ilbert Bll. Also “Duet from the Pinafore”.

The poem presents Ripon’s state of mind as a sad, resigned sense of failure, by a beaten man, from a job he has hated. He is leaving early and will be glad to retire to the country at home. His intentions were worthy, but he did not bring it off. No-one in India will regret his passing, nor will he regret leaving a people he has no affection for. He sourly wishes his successor, Lord Dufferin, joy of it.

Kipling’s poem is a parody of “Locksley Hall”, a celebrated poem of disappointed love by Alfred Lord Tennyson. Kipling refers to it with satisfaction in a letter to his Aunt Edith Macdonald on 17 September 1884, saying rather waspishly that it:

…has disturbed the Pioneer, who wanted to say something nasty about Lord Ripon’s retirement, but only came out with a ponderous leader no-one read.

The Pioneer was the senior sister paper to the CMG, and Kipling was transferred to work for it full time in 1887.
Jan Montefiore compares Kipling’s poem with “Locksley Hall”:

The speaker of Tennyson’s poem is a disgruntled lover, jilted when his bride-to-be chooses a rich man, and dourly prophesying misery for her:

And Kipling echoes him:

‘And I held them, when they halted, ‘spite of legislative prog,
Something slower than a snail, a trifle denser than a log’.

In the end, Tennyson’s lover shrugs her off to go and seek his fortune:

‘Let it fall on Locksley Hall, with rain or hail, or fire or snow,
For the mighty wind arises, roaring seaward, and I go.’

The implication is that Ripon, who has likewise (sort of) been rejected by his subjects, leaves India in a similar resentful huff, but bathetically compared with his heroic original :

‘I would wish you joy, dear Duffy, you’ve your work cut out, I know.
But the special train is waiting at Umballa, and I go.’

See also One Viceroy resigns which Kipling wrote in 1888 when Lord Dufferin was handing over to Lord Lansdown.

Peterhoff the viceregal residence at Simla.

Calcutta (now Kolkata) the seat of goverment and the site of the strongest opposition to the Ilbert Bill.

Britannicus pen-name of one of the most strident opponents of the Ilbert Bill in the columns of The Englishman, a Calcutta newspaper.

nuss nurse (to rhyme with Brittanicus).

at nurse being breast-fed.

Better fifty years of Europe than a cycle of Cathay.

sub chiz the lot, everything (Hindi).

prog a thrust or prod.

Sahib jo hokum what the Sahib orders (will be done).

“Lokil Sluff” a derisive reference, mocking native pronunciation, to Ripon’s policy of fostering political education through Local Self-Government, with elected Municipal Committees with responsibility for sanitation among other things (Rutherford).

entre nous between ourselves (French).

The Mirror the Indian Mirror was the principal Indian (as opposed to Anglo-Indian) English-language newspaper. The issue for 12 September 1884 carried an article on “The Coming Viceroy” which expressed misgivings about the appointment of Lord Dufferin, but also deep disappointment over Lord Ripon’s inadequacies:

Since the fiasco over the Ilbert Bill, Lord Ripon seems to have sunk into perfect quiescence, showing little or no sign of official vitality from his retreat at Simla.
[Rutherford]

Chatterjee a common Bengali name, used here for the whole genus of Babus.

Umballa the railhead for Simla in the 1880s.