This poem was published on March 5th 1890, in the St James’s Gazette. It is listed in ORG as No 417. In Inclusive Verse and Definitive Verse it is incorrectly dated 1891. 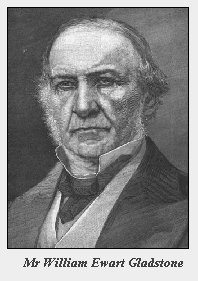 A loyal follower of Mr William Gladstone, the Liberal leader, he had written and spoken in support of his policy of Home Rule for Ireland. Kipling was passionately opposed to the idea of Home Rule, and also objected to the way that Gladstone relied on the support of the Irish members in Parliament, who were themselves supported by men who were ready to use violemce for political ends.

On 6 May 1882 Lord Frederick Cavendish and Thomas Henry Burke had been fatally stabbed in Phoenix Park in Dublin. Cavendish was the newly appointed Chief Secretary for Ireland, and Burke was the Permanent Undersecretary, the most senior Irish civil servant. The assassination was carried out by members of the ‘Irish National Invincibles’, a radical breakaway group from the Irish Republican Brotherhood. Charles Parnell, the leading Irish Member of Parliament, was accused in The Times of complicity in the murders on the strength of letters which later proved to be forged.
Thomas Pinney writes (p. 1537)

Earl Spencer … made a speech supporting the report of the special commission appointed to inquire into charges against Parnell, the lnsh leader, and his associates. The report is the occasion of “Cleared” in the Scots Obserer, March 8, 1890, collected in Barrack-Room Ballads (1892). The commission found some of the charges to be true bur the main one, of complicity m the Phoenix Park murders, was determined to be false. Earl Spencer’s speech was made to a meeting of Liberals at Wolverton and was reported in The Times on March 3, 1890.(Kipling’s poem followed just two days later: Ed.) The heading of the poem is quoted, with some modification, from The Times.

Gladstone’s Home Rule Bill had been defeated in Parliament in 1886 and the Liberals were out of office until 1892-1895, though they remained committed to home rule for Ireland. After they returned to power again in 1905, to Kipling’s disgust they gave self-government to the Boer republics that the British had defeated in the South African War.

The Ballad of the Red Earl The poem is one of several that Kipling called Ballads, modelled on the traditional poems of the Scottish Border country. It uses their common verse form, a number of Scots words, and abbreviations such as ha’ for ‘have’ and o’ for ‘of”.

camel-birds ostriches. Kipling refers to the myth that ostriches bury their heads in the sand to hide from danger.

a desert of drifting words a brilliant metaphor. Kipling implies that the Red Earl disregards the true meaning of what he himself says. For instance in the subheading: they might deplore some of the results – some of the results were murder. And what was tantamount to a revolution was revolt and treason.

Ye have followed a man for a God The Red Earl has blindly followed Gladstone as if he could do no wrong.

your own old words Five years before, in 1885, the Red Earl made a powerful and influential speech in support of Home Rule.

ye must gloss the deed to gloss is to give a deceptively fair appearance to something. The Red Earl has approved Gladstone’s speeches; now he must explain away their results – which included murder (see above).

loup leap – Scots dialect in keeping with the ballad form of the poem.

rogues in grain rogues through and through, like the grain of a beam of wood.

rogues in pact all the different sorts of rogue have agreed together to follow Gladstone.

The quick and their dead ‘the quick and the dead’ is a common biblical phrase meaning the living and the dead. Here the change to ‘their’ shows that the Red Earl’s friends are responsible for the deaths. Once more they are accused of murder.

the Garter the Order of the Garter, one of the highest orders of chivalry, instituted by King Edward III in 1348.

gat Scots for ‘got’. The Garter is awarded by the Sovereign, and both Rebellion and Treason are directly crimes against his or her authority. Kipling writes ‘King’ to rhyme with ‘thing’, but the Red Earl received his Garter from Queen Victoria in 1864. She was still on the throne in1890.

lines 3-4 his only reward comes from worthless people.

lines 3-4 He is deliberately blind to what is plainly to be seen.