[Page 221, Verse heading] Nine lines of verse beginning: ‘For our white and our excellent nights …’ , untitled. Collected in Songs from Books as a Chapter Heading, where there is no capital letter in the final ‘Bay!’, as in First American Edition..
Philip Holberton notes: The wolves of Mowgli’s pack think back over their happy lives. Now their way of life is threatened by the dhole, the Red Dog, and they know that it is worth fighting for.

[Page 221, line 1] white nights Nights of full moon when sleep is impossible: most humans do not like them. But see “The Spring Running” (p. 274, l. 20) where a white night is called ‘perfect’ rather than ‘excellent’

[Page 221, line 5] sambhur a large Indian deer, genus Rusa. The best known of the five species within this genus, Rusa unicolor is a very massive animal standing as much as 54 inches (some 140 cm) at the shoulder, with, in the case of some stags, antlers up to 45 or 50 inches (130 cm) in length.

The Pack answered with one deep crashing bark. “It is met!” they cried.

[Page 221, line 16] paying debts There are numerous differences between the First English and First American editions, particularly in this story. The standard editions (and the Sussex) generally follow the First American texts, sometimes with unfortunate results, see note on ‘Sunol’ (The Jungle Book, p. 252, l. 9). In the First English Edition the sentence here reads: ‘He had the good conscience that comes from paying a just debt; and all the Jungle was his friend, for all the jungle was afraid of him’. [Some more trivial differences are not listed in these notes: Ed.]

[Page 221, line 23] many, many stories The list which follows is reminiscent of Dr. Watson’s lists of the unpublished cases of Sherlock Holmes.

[Page 223, line 8] not a question in which Mowgli concerned himself (‘a matter’ in First English Edition) Mowgli did not concern himself with Akela’s advice to form a new pack because he had been rejected by the previous one, see “Mowgli’s Brothers”. (The Jungle Book, pp. 38-40).

[Page 223, line 12] the Gray Tracker is not mentioned in earlier stories.

[Page 224, line 17] The Four The First English Edition has: ‘The Four began to bristle and growl. Mowgli’s hand went to his knife and he too checked as though he had been turned to stone.’

The dhole (Cuon alpinus) is a species of ferocious wild dog from southern Asia, living in highly social packs. Frank Finn, in his edition of Sterndale’s Mammalia notes that:

…these animals hunt and kill leopards…they are excessively destructive to game, and sometimes to domestic aniumals, even buffaloes not being safe from them; their method is apparently for some to tear the animal open from behind, while others make a frontal attack. A sambhur stag has been known to have nine inches of his windpipe torn out by a bite… [Mammalia 1929 update by Frank Finn, p. 120]

Sterndale himself quotes reports of people that had tried to keep dholes in captivity:

‘as ill-conditioned brutes as it is possible to conceive’, ‘the most snarling, ill-mannered and detestable beast I have ever encountered’.
[Mammalia, 1884 edition p. 240.]

Sometimes a lone wolf is seen to seek his prey singly; these are called Won-tola and are reckoned particularly fierce.
[Mammalia, 1884 edition pp. 234-5.]

[Page 229, line 20] chikai, the little leaping rat Probably the Gerbil or Jerboa Rat (Gerbillus) They ‘have longer hind-legs so that they are like miniature kangaroos, and have a corresponding power of leaping’. [Mammalia 1929 update by Frank Finn, p. 149]

[Page 231, line 21] deaf I surely am Snakes have no external ear or eardrum, but possibly the ear is sensitive, not to airborne vibrations, but to those transmitted through the inner ear from the ground. [ORG]

[Page 234, line 19] Peace Rock When, in times of drought, this rock in the bed of the Waingunga was exposed, the ‘Water Truce’ was declared so that animals could drink without fear of predators. See “How Fear Came” in this collection, p. 7, l. 4.

[Page 236, line 3] black wild bees of India Apis dorsata. A honey bee, not susceptible to domestication, though this has been attempted. This large bee hs been known to sting men to death who were merely walking beneath the nest. [ORG]. The ‘Bee Rocks’, as they are called later, (p. 242, l. 7) are a real site, as Kipling relates:

There are some rocks above a river near Jubbulpore in India where wild bees have lived for many years. Nobody goes near them if he can avoid it, for sometimes they attack and kill men and horses. i.e. in Seeonee. 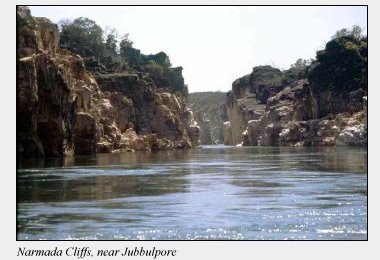 [Page 234, line 19] Little People In First English Edition followed by ‘who had been roused by that buck’.

[Page 238, line 14] Kaa’s head In First English Edition followed by: ‘lay on Mowgli’s wet shoulder and his tongue quivered by the boy’s ear. There was a long silence before Mowgli whispered: – ‘It is to pull …’

[Page 242, line 20] and singing to himself not in First English Edition.

[Page 243, line 3] weak quarters meaning that the hind parts, from which propulsion comes, are not highly developed.

[Page 244, line 10] and there he told the Pack In First English Edition: ‘and for some five minutes he told the pack …’

[Page 245, line 18] After three or four hours First American Edition has ‘four or five hours’; a rare example of the standard editions following The First English.

[Page 246, line 4] Litters of tailless red dogs As the ORG notes, this is – of course – not biologically true, and doubtless the author knew it, but used the idea deliberately as a vivid taunt.

[Page 247, line 4] long lobbing canter Daniel Karlin points out that this is a rare example of a direct quote by Kipling from Sterndale, who reports that the dhole:

…runs in a long lobbing canter, unapt at the double … maintaining the chase more by power of smell that by the eye, and usually overcome by force and perseverance.

[Page 250, line 26] back to sleep In First English Edition followed by: ‘and I will turn also. I do not help wolves. A wolf came running…’

[Page 259-60] Chil’s Song Prose introduction and three seven-line verses. Collected in Songs from Books. In the First English Edition the word ‘For’ is omitted in the first italicised lines in each verse.