[Page 282, line 5] ‘on the long siding’ starting from Jamalpur, the loop runs east via Bhagalpur to Sahibganj, then south towards Calcutta as far as Kanu Junction where it joins up with the line from Howrah. The loop then tends northwest through Raniganj and Madhupur (where the spur line to Giridih connects) to reach the main east-west route again, about 30 miles to the west of Jamalpur.

A ‘siding’ is a branch or spur line onto which rolling stock can be shunted until required.

[Page 282, line 8] Kanu Junction now known as Khana Junction, which is about 70 miles from Calcutta and near Burdwan (Bardwan). [ORG]

[Page 282, line 8] Luckeeserai Lakhi Serai, which is about 60 miles from Patna—downstream. [ORG]

[Page 283, line 16] Vulcan in Roman mythology he was the God of Fire and metal-working. The Roman poets adopted the stories of the Greek God Hephaestus to make them refer to Vulcan. 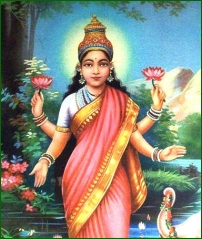 [Page 284, line 13] Lakshmi in Hindu mythology the Goddess of good Fortune. The wife of Vishnu, she was considered the ideal type of Indian beauty.

[Page 284, line 31] the Echo No information on this locomotive has beeen found, but there is an excellent series of photographs of the recently restored and working Fairy Queen (below: EIR-22 built in 1855) at this web-site. 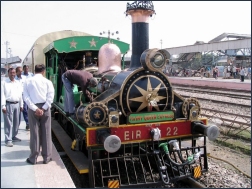 [Page 285, lines 22-23] [ORG]
mud-hole-flanges a small manhole for the removal of mud from the boiler on a locomotive.

blower-cocks to get rid of steam from the boiler in emergencies.

lead-plugs a plug that melts if the boiler water-level is too low, then steam escapes and prevents an explosion.

platform brackets probably the brackets that support the driver’s and fireman’s platform, and/or a footplate that is fixed to the side of the locomotive. See picture of the Fairy Queen above.

[Page 285, line 33] She is reduced to a shell—is a very elle-woman In Norse folk-lore—’young and fair, but behind she is hollow’. 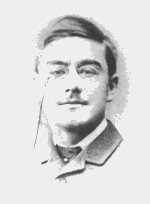 [Page 286, line 9] pince-nez a form of spectacles without ear-pieces but which were fastened by the nose-bridge pinching the nose.

[Page 287, line 17] to bait to stop for the purpose of refreshment. Kipling is still keeping to his analogies of locomotives being akin to horses or elephants.

[Page 287, lines 31-32] four-wheeled coupled bogie a bogie is an independently swivelling unit with smaller diameter wheels than the main driving wheels. In this case the bogie has two wheels per side.

[Page 287, line 32] Dobbs a locomotive manufacturer. It should almost certainly be Dubbs & Co, of Glasgow.

[Page 289, line 21] dhobi-mark as if the Inspector was marking his linen for the dhobi – the laundryman. All washing had to be carefully marked before it was taken from a house.