This poem, listed in ORG as No 660, was first published in the Pall Mall Gazette as a heading to the story “Quiquern” in October 1895, and in The Second Jungle Book in November 1895. In the main collections, and in Pinney (below) it is untitled.

The poem is a lament for the passing of the old way of life of the Inuit, who had lived without wood or metal in the freezing Arctic, treeless and ice-bound, sunless in the depths of Winter, for many centuries. They were the most remote, and perhps the hardiest, of the Native Americans who had migrated over the land-bridge from Asia in far off times. They used dogs to pull their sleighs, and narwhal-horn for spears to hunt the seal at the edge of the ice. Only in the far North, which Kipling calls ‘the Elder Ice’ are the old ways untainted by contact with the white man.

One is reminded of Kipling’s story “The White Seal in The Jungle Book in which Kotick, the White Seal leads his peoiple to remote and inaccessible beaches, where he:

… sits all the summer through, getting bigger and fatter and stronger each year, while the holluschickie
okay round him, in that sea where no man comes.

In “Quiquern”, the linked story, a little tribe of Inuit is near starvation. The food is running out and the dogs are going mad. A boy and a young woman set out in the snow to hunt. Following two of the dogs, which have run away in the darkness, they reach the edge of the ice, find and kill seals, and bring them home to their village so all can eat, and live.

The Elder Ice T he old ice. The most nothern and remore Polar regions, where white men never come. 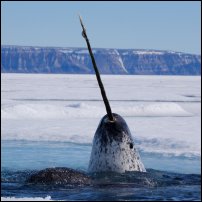 narwhal-horn The narwhal, or narwhale (Monodon monoceros), is a medium-sized toothed whale that possesses a large “tusk” from a protruding canine tooth. It lives year-round in the Arctic waters around Greenland, Canada, and Russia. (Wikipedia)