Published in the Civil and Military Gazette (CMG) 4 September 1885, unsigned, with the heading:

The Ootacamund paper states that ‘during the stay of the Commander-in-Chief and party at Arconum several of them were seized with choleraic symptoms.They had been advised to use bromide of soda for some days previous to embarkation for England, to ward off sea-sickness. The chief and family commenced the three days’ course at Arconum. The two Aides-de-Camp did not take it, nor did the governess, and they were not ill.’

The poem, which light-heartedly recounts the sufferings of the C-in-C and his family, was unsigned in the CMG, and as Pinney notes (p. 2253) Kipling denied authorship in his copies of Lloyd Chandler’s Summary (1930) and Index of first lines (1931), writing ‘not mine’ against the title in both. (These bibliographic works were published by the Grolier Club in New York, and Kipling’s copies are in the Kipling Papers at the University of Sussex: see Pinney p. xix)

However Pinney judges that the inclusion of the verses in Scrapbook 2 of Kipling’s own press cuttings, also in the Kipling Papers, and in the “Summary of the Year’s Odd Work” in Kipling’s diary for 1885 (see the Cambridge Edition of Something of Myself, ed. Pinney (1990) p. 217) makes his authorship certain.

The poem was never collected in Kipling’s published works but is to be found in Rutherford (p. 276) and Pinney (p. 1757). 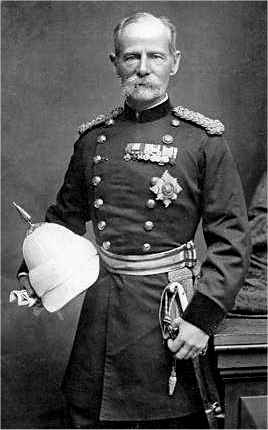 He was born in 1832. He won the VC in the Sepoy Rebellion of 1857, and had many years of distinguished service in India, culminating in his victories in the Second Afghan War, 1878-80. He was Commander-in-Chief, India, 1885-93, was later appointed Field Marshal and was in supreme command in South Africa in 1899-1900. He died in 1914 while visiting troops in France.
Nicknamed ‘Bobs’ he was a popular commander, courageous, bold, tactically brilliant, and an engaging personality. A high point of Kipling’s time in India was his ride along the Mall in Simla in the summer of 1888 with the Commander-in-Chief, who quizzed him about the lives of the private soldiers about whom the young journalist had written much. Kipling admired him greatly,
and wrote of him with affection.

Ootacamund (officially Udhagamandalam) a hill station in South India, the summer headquarters of the Governor of Madras (now Chennai). Known as ‘Ooty’.

Arconum (now Arakkonam) a town on the road between Ootacamund and Chennai.

Large doses of sodium or potassium bromide (undiluted) have an irritant action on the stomach and must have caused the choleric symptoms experienced by Lord Roberts and his family. Bromide intoxication or bromism is caused by prolonged administration of too much of the drug. Individuals vary greatly in the amount of drug required to produce symptoms of bromism. These symptoms include mental dullness, slurred speech, apathy, anorexia, drowsiness and loss of sensitivity to touch and pain. Unfortunately we don’t know if the Roberts family experienced any of these symptoms after only three days. But it seems that their complaints were mainly of a gastric nature.