The poem had a bizarre after-life, in which it was linked with the Roman poet Horace. As a schoolboy obliged to translate him, Kipling had hated Horace but in his middle years he had come to love the poet and his voice as commentator on public affairs. (See Susan Treggiari’s essay “Kipling and the Classical World”). He carried a copy of Horace’s four books of Odes around with him, in which he wrote original epigrams of his own. From 1917 he began to play with making spoof versions of Horace. See Thomas Pinney (Ed.) Letters IV pp. 439-40.

By January 1918 Kipling was planning with a group of friends to get together and publish a collection of spoof versions, in Latin, of the non-existent Fifth Book of Odes. At that time he joked he ‘could see Horace wrote’ ‘The Pro-Consuls’ and that it should have a place, duly turned into Latin, in the spoof collection. See Thomas Pinney (Ed.) Letters IV p. 480.

In November 1920 A.B.Ramsey’s translation of ‘The Pro-Consuls’ into Latin appeared as Ode VI in Q. Horati Flacci Carminum Librum Quintum, together with a deliberately laughable ‘schoolboy’ prose translation made by Kipling himself for a joke. See Thomas Pinney (Ed.) Letters V p. 39.

Under the Roman republic, a period when there was no king and no emperor, but power was shared between leading men, every year the Roman people elected two consuls to hold supreme military and judicial authority. Once their year of office was over, they were known as proconsuls and their authority was extended in order to enable them to carry on a military command or to govern a province. 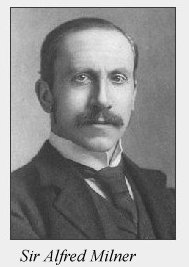 At the time of the Anglo-Boer War of 1899-1902 Kipling travelled to the Cape, becoming a friend and a colleague in all but name of Sir Alfred Milner, who was then governor of the Cape Colony. Without that context it would be difficult to make sense of this poem, forced and uncongenial as it probably appears to most readers today. Even by the 1930’s at the time when it was collected in the Sussex Edition it was felt useful to add an explanatory ‘Lord Milner’ as a subtitle.

For its earliest readers, however, there was no difficulty in making the link with Milner. When it appeared in The Times on 22 July 1905 it was prefaced by an epigraph taken from The Times leader of the previous day.:

The foundations which Lord Milner has laid are firm and strong, and he may leave other men to build upon them in the proud consciousness that, but for the decision which he took six years ago there might now be ruins where a fair and stately building is slowly rising. —The Times July 21st 1905.

Both the title and the poem itself refer to Milner’s labour in the reconstruction of southern Africa after the Anglo-Boer War. As High Commissioner of Southern Africa and Governor of Cape Colony he had exercised the highest authority there since 1897, well before the outbreak of war with the Transvaal and the Orange Free State in 1899. He took his position seriously, working all hours and in the end ruined his health by that. Once peace was made he laboured to restore and rebuild and to develop the economy of the new three-part state, later known as the Union of South Africa. It is the dedication, as it was seen at the time, with which that work of extended authority, comparable with ‘governing a province’, was performed, that the poem invites us to recognise and admire.

In 1905 when “The Pro-Consuls” was written, Milner had just retired, returning to England exhausted and in poor health. His policies had not been above criticism. Some thought he could have done more to prevent the war, while decisions he had taken in its aftermath had been attacked, in particular his permission for Chinese labourers to be brought in to work the gold mines.

Kipling takes his stand alongside his friend Milner in this poem, celebrating both his labours and the disinterested public spirit which drove them but in a strangely defensive tone. The Times at least had been filled with Milner’s praises for months. He didn’t seem in need of immediate support. Something more lay behind the verses that Kipling apparently wrote so swiftly in response to those phrases in The Times. (It’s also possible that he had them by him, already written, and was waiting for a cue to publish them.)

Kipling shared Milner’s spirit of dedication to public service and to the betterment of the world, as his own Times obituary would acknowledge. It seems possible that he saw himself as the second pro-consul. The time he spent out in South Africa every year, he called ‘the political side of my life’. He increasingly believed hat his own job was not only to entertain but also to teach and enlighten: a shift of tone which was beginning to lose him readers. Having gone out to the Cape in 1899 in a state that was exceptionally vulnerable, after a near-fatal illness and the death of his small daughter, he’d made an extraordinary identification with two powerful men, Cecil Rhodes and Alfred Milner which led to an emotional investment in the country’s future.

“The Pro-Consuls” speaks in two voices: the italicised lines at beginning and end offer a defiant self-justification on the part of a chosen elite, ‘we the priests’, in terms that claim a Biblical dignity. The language is high-flown, a touch over-wrought, even stagey. As a child, the poet had been regularly subject to attack, as he records in Something of Myself: the voice in these italicised lines suggest the residue of that experience.

The six-line stanzas, on the other hand, read rather like Latin: that’s where the link with Horace comes in. They consist of concise moral definitions of ideal conduct, here driven home by tight rhymes. They are designed to make readers of the time respect the dedication of those who govern them in general but with particular reference to Milner. Whether today’s readers will accept this is another question.

In the British Library manuscript the title is shown as ‘The Consuls’, amended by an addition to “The Pro-Consuls”. The original four lines of the opening stanza are lightly crossed out. A fair copy of these lines ‘For so the Ark be borne to Zion …’ appears at the foot of the page, to close the poem. It meant breaking up what was originally a sonnet. All fourteen lines are marked as Italic in the manuscript, distinguishing them from the voice of the six-line stanzas, as indicated above.

In a letter of November 1909 to his Aunt Louie Baldwin, Kipling quotes the lines in their original form as an example of a sonnet. See Thomas Pinney (Ed.) Letters III p. 400.

[Stanza 1] The overfaithful . . . blood Cryptic and compressed, this appears to mean that an excessive dedication to the task can achieve all that is wished for but only at the cost of exhausting vital forces.
The clamour . . . good The precious time lost in responding to public criticism prevents aims from succeeding.
our outgoing when we started out, ie we knew before we started.
This we accepted . . . not man’s award We accepted all this, willingly staked our fine reputations, as though they were worthless, on this endeavour to protext the fragile beginnings of this new state. It’s the destruction of that state—perhaps swamped by a ‘sea’ of others’ idleness—that we care about, not how men speak of us.

[Stanza 2] They that dig foundations deep Those who prepare the ground for a new enterprise. Kipling often uses such images associated with Freemasonry, cf “The King”.
Of their generation From the people of their own time.
Any more than mountains . . . plain In the same way that you don’t notice how high mountains are until you’ve left them behind and look up from the plain.

[Stanza 3] With no veil . . . Such as shroud or sceptre lend— Open to view, not idealised as rulers and the dead are.

Of one height Treating friends and enemies alike.
cheapen a pun. The original meanings of ‘to cheap’ were connected with buying and selling. The pro-consuls have to prostitute themselves, socially speaking, and also make their innermost being cheap in the interests of canvassing support.
ends uncheapened Aims that are ideal and uncompromised.

[Stanza 4] hirelings People who do the work because they’re paid to, unlike the selfless leaders Kipling has in mind.
The unsleeping arch another image with links to Freemasonry but there is also a contemporary reference. In the recent best-seller, the novel The Nebuly Coat by J. Meade Falkner, published in 1903 the repeated phrase ‘The arch never sleeps’ is a leitmotiv. It means that masonry continually thrusts against its environment. Even earlier, in James Fergusson’s 1865

, the idea that ‘the arch never sleeps’ is attributed to ‘the Hindus’. [Our thanks to Professor Jacques Heyman for these points.]
o’er-trusted cornerstone Cornerstones are those stones which have been set in place at the angles of a building. Their ability to withstand stress plays a crucial part in ensuring the stability of the whole. Here the image implies that one of the leader’s tasks is to look out for weak elements in his plans before disaster, collapse of the whole structure, occurs.

[Stanza 5] lust Dishonourable wish for.
Not by Peace herself betrayed not even taken in by their own desire for peace.
fitly made arrived at properly, with proper terms in place.
acold Grown cold. [cf King Lear III, iv]

[Stanza 6] sports Display, free play of Liberty.
the tongues their act set free The voices of the very people they have created a free society for.
quicken . . . displace While they bring to life, foster and cultivate the political forces that they intend should take over from them.

[Stanza 7] feign Claim to have, pretend.
Scholarly Not active and engaged, merely commentators lacking actual experience.
souls May be a pun, though perhaps not a conscious one. Milner had links with ‘The Souls’ a loosely knit group of intellectuals and politicians.
go down into the pit A phrase from the Old Testament, where it is associated with death and the isolation of the grave. See Psalms 28,1; 30,9;88,4; Ezekiel 26,20; and Proverbs 1,12. Here it works to suggest the strain of Milner’s lonely endeavour.
And, despite . . . Heave a new world towards the day With enormous effort, despite qualms about its quality, the men of soul encourage and promote a new political dispensation. The metaphor is developed from the preceding reference to the pit.

[Stanza 8] These at labour make no sign It is difficult for onlookers to interpret the decisions and acts of these heroic men.
discover God’s design . . . fears Kipling did not subscribe to conventional Christianity but he makes use of its language here to point out that the movements of the natural world don’t reflect human hopes and fears. By the same token it is implied that Milner’s decisions are beyond his critics’ understanding: a somewhat extravagant claim.

[Stanza 9] the Ark . . . Zion a metaphor meaning to incorporate the new South Africa into the Empire successfully. The Ark referred to here is not the one built by Noah but the Ark of the Covenant. In the Old Testament this was a sacred chest made of acacia wood and plated with gold; it was held to contain the stone tablets inscribed with the Ten Commandments, a sign of the covenant or special promise made by God to the Jewish people.

His use of the image suggests that Kipling is happy to imply that the British Empire has a special destiny too.’The strongly Biblical language offers Kipling a way to fuse political striving with duties that are sacred. He draws on Old Testament references (1 Kings 8,1; 2 Chronicles 5,2) while changing even reversing their meaning.
so the Shrine abide As long as the Empire remains intact.
if we the priests . . .before it Those of us who serve that ideal are indifferent both to humiliation and to applause.