The poem was first published in April 1917 in A Diversity of Creatures, linked to the story “The Village that Voted the Earth was Flat”. It is numbered 1045 in ORG. It should not be confused with the unpublished poem of the same title written in 1899, with the first line:
‘Why don’t you write a play—’ (Pinney p. 2051).

The poem is a celebration of the press, the power of newspapers to influence people, and the tremendous enjoyment and fascination in exercising that black art. It offers work that consumes one, games to be played, battles to be fought. Once learned, no journalist can ever forget it.

Jan Montefiore suggests that this poem may have influenced W H Auden when he was writing
“Foxtrot From a Play”, which starts:

The school paper in its locked formes lay on a stone-topped table, a proof by the side; but not for worlds would Beetle have corrected from the mere proof. With a mallet and a pair of tweezers, he knocked out mysterious wedges of wood that released the forme, picked a letter here and inserted a letter there, reading as he went along and stopping much to chuckle over his own contributions.

He spent the first seven years of his working life as a newspaper man, as Assistant Editor of the Civil and Military Gazette, the main English language paper in the Punjab, read closely and critically by the Anglo-Indian community of civil servants and soldiers, – and their wives:

My Chief took me in hand, and for three years or so I loathed him. He had to break me in, and I knew nothing. What he suffered on my account I cannot tell; but the little that I ever acquired of accuracy, the habit of trying at least to verify references, and some knack of sticking to desk-work, I owed wholly to Stephen Wheeler.

I never worked less than ten hours and seldom more than fifteen per diem; and as our paper came out in the evening did not see the midday sun except on Sundays. I had fever too, regular and persistent, to which I added for a while chronic dysentery. Yet I discovered that a man can work with a temperature of 104, even though next day he has to ask the office who wrote the article.
[Something of Myself pp. 40-41]

He had the advantage of a wise and kindly father who was also a writer – his Beast and Man in India is an epic, and his mother and sister also wrote, which occasionally caused uncertainty over authorship. This early experience gave him a sophisticated sense of the way in which a newspaper can influence its readers, which never left him.

In the story linked to this poem, “The Village that Voted the Earth was Flat”, four companions are held up to ridicule by a local magistrate for a bogus traffic offence. They include two journalists and a newspaper proprietor. They join forces with a music-hall impresario, and together take skilful and systematic steps to make the magistrate, and Huckley, his village, ridiculous in the eyes of the nation, with spectacular success:

And then, in all the zealous, merciless press, Huckley was laid out for it to look at, as a drop of pond water is exposed on the sheet of a magic-lantern show … Fate ruled it that there should be nothing of first importance in the world’s idle eye. One atrocious murder, a political crisis, an incautious or heady continental statesman, the mere catarrh of a king, would have wiped out the significance of our message, as a passing cloud annuls the urgent helio. But it was halcyon weather in every respect. Ollyett and I did not need to lift our little fingers any more than the Alpine climber whose last sentence has unkeyed the arch of the avalanche. The thing roared and pulverised and swept beyond eyesight all by itself—all by itself. And once well away, the fall of kingdoms could not have diverted it.

In an exchange with Max Aitken (later Lord Beaverbrook), who had acquired the Daily Express in 1916, and insisted on his wish for power, Kipling is said to have responded: ‘Power without responsibility, the prerogative of the harlot throughout the ages’. In March 1931, Stanley Baldwin, the Prime-Minister and Kipling’s cousin, used the phrase to attack the press Lords Beaverbrook and Rothermere during the Westminster by-election campaign. 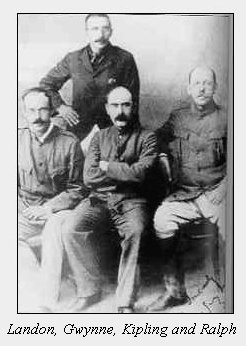 See also the scene in the press room at the Civil and Military Gazette on a hot night in “The Man who would be King” (Wee Willie Winkie pp, 208-211): the handling of a sensational story about a sea-monster in “A Matter of Fact” (Many Inventions pp. 175-181): the complexities of a sub-editor’s life as seen in “The Files”; and Kipling’s speech to the Worshipful Company of Stationers in July 1925.

Also A Burgher of the Free State (1900), about a master-printer, which reflects Kipling’s brief stint as a newspaperman in Bloemfontein (right) during the South African War, after Roberts had taken the city early in 1900.

the Word the Freemasons use certain passwords in their ceremonies.

Litany a series of petitions used in Christian worship. See the Book of Common Prayer of the Church of England.

the Jew shall forget Jerusalem Probably a reference to Psalm 137: ‘If I forget thee, O Jerusalem, let my right hand forget her cunning.’

Harrild Harrild & Sons Limited was a British manufacturer of printing machinery and supplies. Founded in 1809 by Robert Harrild at Norwich Street, London EC4, it closed in 1949. 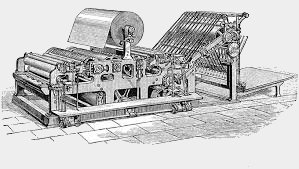 League-long a League is an ancient measure of distance,
usually defined as three miles though the length of a mile could vary from place to place and time to time. At sea, a league is three nautical miles (3.5 miles, 5.6 kilometres).

As the war-horse snuffeth the battle afar … He said Ha! Ha! See the Book of Job 39, 25 in the Old Testament.
‘ He saith among the trumpets ‘Ha, ha’; and he smelleth the battle.afar off, the thnnder of the captains, and the shouting.

the entered Soul probably a man who has become a Freemason.

number the days  There are numerous biblical echoes of this phrase, particularly from the Book of Job, which was well-known to Kipling.

bring forth  The same is true of this phrase, Job again.

It’s very untypical for Kipling to cluster in this way references to a single Bible passage. But there’s a point to it: he’s saying (half-jokingly) that the press is as great a mystery to mere mortals as God himself, and has Godlike powers.[D.H.]

The Times a distinguished British daily newspaper launched in London in 1785 under the title The Daily Universal Register, adopting its current name in 1788. It set standards that other papers were to follow. In Kipling’s day The Times was one of the three or four most influential newspapers in Britain.

lightnings see Job, 38, 35:
‘Canst thou send lightnngs, that they may go and say unto thee, Here we are!. ‘ Also the name of a printing-press. 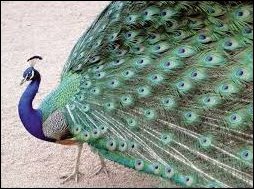 peacock peafowl include three species of birds in the genera Pavo and Afropavo of the Phasianidee family, the pheasants and their allied species.

They are known for their piercing call and their extravagant and beautiful plumage.

The Wordsworth edition points to Job 39:13:

Gavest thou the goodly wings unto the peacocks? or wings and feathers unto the ostrich?  [D.H.]

Interdict a Papal decree forbidding the administration of the Sacraments to someone who has transgressed.

Union Probably a trade union, the word ‘decree’ being used ironically. Kipling would not have approved of decrees by either unions or the Pope.