First published in The Civil and Miliotary Gazette, March 16th 1886.

Sleary, an impecuious young officer, is keen to marry, but cannot afford it while he remains in the army. He cynically proposes marriage to the daughter of a judge, who uses his influence to get Sleary a well paid administrative post ‘on the Bombay side’. Then, to escape, he pretends to have epilepsy, and the judge’s daughter tearfully rejects him, only to see him wed the lady that he had loved all along
Alastair Wilson writes:This is Kipling at his most cynical. The story told is very similar to that used by W.S. Gilbert in the Judge’s song in “Trial by Jury”, the first successful operetta written with Arthur Sullivan, produced some ten years earlier in 1875. The story would have been well-known by all the amateur dramatic societies in British India.

In it, the Judge in a ‘breach of promise of marriage’ case reveals that “When I was young and called to the Bar … I was as many young barristers are, an impecunious party”. So, “I fell in love with a rich attorney’s elderly, ugly daughter.” As a result “the briefs came trooping gaily” until “at length I became as rich as the Gurneys, an incubus then I thought her / So I threw over the rich attorney’s elderly, ugly daughter.” It seems very likely that – rather than referring to a real case – Kipling was simply transposing Gilbert’s theme to British India, adding his own twist at the end.

As for the unprincipled Sleary, leaving aside his pay, under no circumstances would a subaltern have been allowed to marry. Any officer in the army (Indian or British) had to seek his Colonel’s permission before marrying. No one could stop a young couple from getting engaged, but marriage would have been out of the question. There was an implied rule “Subalterns cannot marry, Captains may marry, Majors should marry, Colonels must marry”. [A.W.]

[Title] The Post that Fitted The job that suited him. There is also a pun on the word fitted, since he escaped his unwanted marriage by pretended epileptic fits.

[Lines 1, 3] tangle The repetition of this word in the heading prepares for the complex plot Sleary completes to entrap Minnie Boffkin and her father.

[Line 6] Tunbridge In Kent; India is eastwards from there. Today spelt ‘Tonbridge’, though the adjacent spa town is still spelt Tunbridge Wells. Truly the ways of English orthography are a mystery. [A.W.]

[Line 11] Subaltern An officer below the rank of Captain. As such, Sleary would have had to live a bachelor life in the mess; and his main expenses would have been mess subscriptions, bar bills, uniforms, and his horse, or horses, certainly no ‘two-plate dinners’. But he evidently had other ideas, based on having his own household.

[Line 14] Got him made a Something Something somewhere on the Bombay side.
British India at this time was still divided into three administrative areas, known as Presidencies, centred on Calcutta, Bombay and Madras. As indicated above, his regiment would not have countenanced Sleary’s marriage (whether to Carrie or Minnie Boffkin); nor, to a possibly greater extent, could he have married if he had been able to transfer to the Indian Civil Service. So Judge Boffkin probably pulled strings to get him transferred to a ‘political’ (i.e. administrative) appointment in the Bombay Presidency, or perhaps in one of the Princely states immediately adjacent to the Bombay Presidency. [A.W.]

[Line 16] artless innocent, but used here iuronically, he was far from artless.

[Lines 17-18] impulse of a baser mind? Again, Kipling is ironic. For a young man to withdraw from an engagement would have been a serious matter, but he manoevred Miss Boffkin into jilting him.

[Line 19] modus operandi Latin A method of operating or functioning. 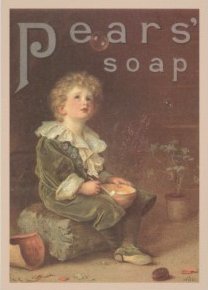 [Line 20] Pear’s shaving sticks Kipling makes a petty error here – the company was A & F Pears (now a part of the vast Unilever empire), so it should read “Pears’ shaving sticks”. Pears was then the pre-eminent brand of soap in England; indeed it was one of the first, if not the first, soap to be sold under a single brand name. They also were one of the earliest commercial firms to market their product in a way which is recognisably modern.

They bought a painting by the Academician, John Everett Millais, to make their famous poster. The model, a curly-headed boy blowing soap bubbles, was his grandson, ‘Willie’ James – who later became Admiral Sir William James. He never lived down his nickname of ‘Bubbles’. [A.W.]

[Line 25] chastened holy joy Both adjectives are sarcastically punning on Sleary’s misconduct – he is not Minnie’s sacrificial victim but rather her manipulator, though she does not realise it.