‘Went ahead at a yarn entitled “For One Night Only” – the story of people who hired a box at a theatre but when they were in it could see nothing save howling chaos – the blank darkness of the Pit – not the theatre Pit. Worked it over and over and sent it to Longman’s …’

J M S Tompkins
looks at this and other stories of the supernatural, in her Chapter 7 “Man and the Abyss”, observing that some of which read like bizarre inventions (page 198) while some are founded on fact. ‘Nothing’, she says, ‘explains the haunted theatre-box of “For One Night Only” (p. 202).

For One Night Only This title was an announcement displayed at a theatre or music-hall when a production or artiste was indeed on for just one performance, so that audiences were encouraged to seize a rare opportunity.

divan in this context a large cushioned seat or settee.

Missing Link a phase in the evolution of animals and humans showing the transition from one species to another, particularly that from apes to men. Much discussed after Charles Darwin published his Origin of Species in 1859, six years before Kipling was born. 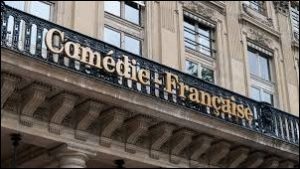 Comédie Française or Théâtre-Français, a distinguished theatre in the heart of Paris, established in 1680, one of the few state theatres in France.

match in this context a marriage.

Mile End Road an important thoroughfare in the Borough of Tower Hamlets in the East End of London, some six miles from the centre.

Theater (sic) of the Patent Develries It is not clear what entertainment Mrs. Skittleworth and her party witnessed, but it seems to have had a remarkable effect on them – perhaps “magic” and illusions similar to the entertainment provided by John Nevil Maskelyne (1839-1917) the English stage magician and entrepreneur at the Egyptian Hall in Piccadilly from 1873 to 1904. There was also an illusion known as “Pepper’s Ghost” – see Notes to “The Brushwood Boy” (The Day’s Work, page 363, line 20).

box in this context a compartment in a theatre to seat several people, usually having a somewhat limited view of the stage

Professor professional entertainers are sometimes so called (Punch and Judy men, for instance !)

Zoetrope a device that produces an illusion of movement from pictures within a cylinder with vertical slits in the sides; on the inner surface of the cylinder are images from a set of illustrations. The cylinder revolves while the user looks at the pictures on the opposite side of the cylinder’s interior seeing a rapid succession of images producing the illusion of motion, as in a motion picture. It stands on a table, however, so in that form would not be large enough for the stage in a theatre. See Norman Page, A Kipling Companion, page 192 for the author’s interest in the cinema – and, as an amusing example of such interest, “The Prophet and the Country” (Debits and Credits) and “Aunt Ellen” (Limits and Renewals.)

twenty-five shillings worth £98 at today’s values..

Levantine dragoman a guide and interpreter from the Eastern Mediterranean

Cook’s the world-wide travel agency founded by Thomas Cook (1808 –1892) , that is now the Thomas Cook Group. As Thomas Cook and Son: the company arranged travel for Kipling on many occasions and treated him very well when his bank failed when he was on his honeymoon, (Charles Carrington p. 203).

leaf in this context an extension to a dining-table

chloroform now known as trichloromethane – formerly used as an anaeshetic.

Aunt Sally traditionally played on fairgrounds. a dummy in the form of the head of an old woman with a clay pipe in her mouth, or occasionally a ball on a stick. The players throw sticks at the head in to break the pipe.

belcher A neckerchief with blue ground, and large white spots having a dark blue spots, named after a pugilist called Jim Belcher, sometimes applied to any particoloured handkerchief worn around the neck. The earliest usage cited was 1805.

one and sevenpence halfpenny about seven pence in roday’s decimal currency, but worth nearly £5 at today’s values.

Westbourne Grove still a retail road in the Royal Borough of Kensington and Chelsea, from Kensington Park Road in the West to Queensway in the East, crossing Portobello Road. The original department store was created by William Whiteley, who started a drapery shop at 31 Westbourne Grove in 1863. By 1890 over 6,000 staff were employed.

Almighty and most merciful Father…. the beginning of the General Confession used at Morning and Evening Prayer in the Church of England.

cloud in this context a shawl. See “Three and an Extra” (Plain Tales from the Hills) page 14, line 12

tire-woman a maid, the female attendant in the cloakroom

vain imaginings an echo of Psalm 2, 1.: ‘Why do the heathen so furiously rage together; and why do the people imagine a vain thing ?’