The full forty-one line form of this poem was published in Century Magazine in January 1900. It is listed in ORG as No 560 under the title “The Palms”.

The first twelve lines of verse 3 were published as an untitled heading to the story “A Matter of Fact” in The People on January 24th 1892, preceded by the following four lines and attributed to The Palms.

And if ye doubt the tale I tell,
Steer through the South Pacific swell;
Go where the branching coral hives
Unending strife of endless lives…

When the story was collected in Many Inventions in May 1893 the sixteen line heading was also attributed to The Palms, but in later editions to In the Matter of One Compass. It is included in the first (1912) edition of Songs from Books but not in the later verse collections.

The full poem is collected in:

The sixteen-line heading introduces one of the themes of the story – disbelief. Although the story is called “A Matter of Fact” and the narrator tells it factually, he decides to publish it as ‘a lie’ – fiction – and the other two newspaper men who are witnesses also realise that no paper, even in America, will print it as fact.

The rest of the verse introduces ‘The blind white Sea-snake and his bride’
whose appearance on the surface forms the heart of the story. 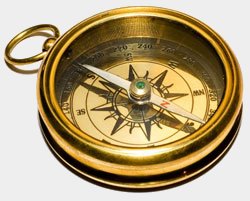 In the full poem as enlarged, the Needle of the compass has become the chief character and the Sea-snake is only a minor part of its setting. The Needle sings the two refrains printed in italics, and in the last verse ‘we’ – the whole ship and crew – take up the theme that ‘we return again.’ The poem has become a song of praise to the strong ships that can make safe and regular voyages through storm and calm, above the mysterious deeps below, teeming with strange creatures.

In “The King” written two years later, the Skipper in verse 5 says:

Sure as the ferried barge we ply
‘Twixt port and port….

But that is a cry not of triumph but of sorrow for the death of Romance.

back to wind the scene is on a sailing ship running before a gale. The helmsman dare not look behind: It is his task to keep the ship accurately stern-on to the great waves that are overtaking her. If he looks behind and sees how big the waves are he may lose his nerve and his concentration, on which the safety of the vessel depends.

the caps the tops of the masts.

blocks blown free the blocks are the pulleys that normally control the sails and rigging. In the storm some ropes have snapped and the blocks are rattling about in the wind.

the Needle the magnetised piece of steel that points north – the essential heart of the “One Compass” of the title. It is used to set (previous line) the ship’s course out of the gale into the peace of calm again.

[Verse 2] – beginning with the four extra lines from “A Matter of Fact” – see above.

South PacificThe story is set in the Atlantic, on a voyage from Cape Town to Southampton. But coral reefs are much commoner in the Pacific.

hives here a verb meaning to bud or break off.

endless lives perhaps “countless”. But some coral polyps reproduce asexually, by budding, so the parent’s substance is virtually immortal.

Starfish marine echinoderms, typically having five “arms”. Suckers on the arms act as fingers and allow the starfish to move.

Sea-egg more commonly “Sea-urchin”. Marine echinoderms related to starfish. Their spherical bodies are covered in spines on which they move.

the constant Needle the compass Needle always points to the magnetic Pole. 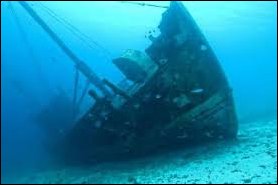 long-lost ships sunken ships eventually drift down to where the Sea-snakes live.

Tropic the hottest part of the Earth, on either side of the Equator.

Trade the region where the steady Trade Winds blow.

the stranger stars in the Southern Hemisphere different constellations are to be seen.

Daniel Hadas points out that, just as verses 1 and 2 describe a ship running before the wind at night, in verses 3 and 4 a vessel is sailing over a windless (“pulseless”) sea in the daytime. This matches the sea in ‘A Matter of Fact’:

“The sea was as smooth as a duck-pond, except for a regular oily swell”

The swell comes from the great sea creatures thrown up from the depths, I think. [D.H.]