This poem, listed in ORG as No 557, was first published in October1896 as an untitled introduction to the Barrack Room Ballads section of The Seven Seas.

Introducing another series of Barrack Room Ballads Kipling tells how he uses the works of others. His readers are not troubled and neither is he. From his earliest writing days he read other poets and story-tellers widely, and wrote parodies and other ‘echoes’, borrowing tales and episodes and metres from other writers, as others have done, including Shakespeare.

In Kipling’s last story “Proofs of Holy Writ” he has Will Shakespeare and Ben Jonson chatting in an orchard over a flagon of wine. Ben challenges Will for stealing other men’s plots:

I say I build upon my own foundations; devising and perfecting my own plots; adorning ’em justly as fits time, place, and action. In all of which you sin damnably. I set no landward principalities on sea-beaches.’

‘They pay their penny for pleasure – not learning,’ Will answered above the apple-core….

…I’ve known honester jack-daws. And whom among the learned do ye deceive? Reckoning up those – forty, is it? – your plays. You’ve misbegot, there’s not six which have not plots common as Moorditch.’

‘None! Our business must be fitted with parts hot and hot – and the boys are more trouble than the men. Give me the bones of any stuff, I’ll cover ’em as quickly as any. But to hatch new plots is to waste God’s unreturning time like a -‘ – he chuckled – ‘like a hen.’

Daniel Hadass note that Kipling is also taking a position here on the Homeric Question, somewhat in advance of Milman Parry.

See also Early Verse, The Muse among the Motors, “Lollius” and other Kipling parodies of Horace, and “Gow’s Watch”. Also Ann M Weygandt’s study of Kipling’s Reading and its influence on his poetry (U. of Pennsylvania Press, 1939) 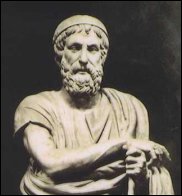 Homer is the name given by the ancient Greeks to the legendary author of the Iliad and the Odyssey, epic poems, the first great works of Greek literature. The Iliad is set during the ten-year Trojan War. The Odyssey describes the return home of Odysseus, king of Ithaca, after the fall of Troy.

Such epics, like the Icelandic sagas or the Arthurian legends, based on stories handed down in speech and song from generation to generation, are the work of many hands.

bloomin’ a polite version of a rude expression.

winked a wink is a secret signal made by closing one eye and perhaps contorting the face to pass a silent message, usually sharing a secret or joke.