ORG Volume 8, p. 5441 lists this poem as Verse No. 1006.The first two stanzas were first published as the heading to the third of Kipling’s Letters of Travel from his visit to Egypt in 1913, in Nash’s Magazine (as “Cairo, Sorceress of Cities”) and Cosmopolitan (as “Egypt of the Magicians III”) for August 1914. The article was called “A Serpent of Old Nile” when it was collected in Letters of Travel (1892-1913) .

The full poem, in four stanzas, is collected separately in:

The poet is rebuked by his conscience for responding to the powerful, but unreal, echoes of an old abandoned love. Nonetheless he finds them heartbreaking. It is interesting to compare the piece with “The Lovers’ Litany” (1886), and “An Old Song” (1887).

Like “A Pilgrim’s Way” the poem is linked to Kipling’s account of his time in Egypt in 1913, which he found evocative and perhaps disturbing, with its reminders in the streets of the sounds and smells of Muslim cities in India, and in the salons of the many-sided society he remembered there from his youth.

It is interesting that he called the series Egypt of the Magicians, and referred to Cairo in Nash’s as “Sorceress of Cities”. 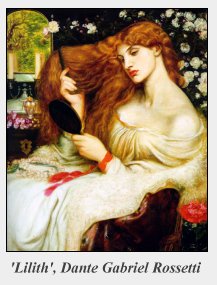 Lilith In Jewish mythology, found earliest in the Babylonian Talmud, Lilith was the first wife of Adam, the first man, created from the same earth, as opposed to Eve who was formed from one of Adam’s ribs, as related in Genesis Chapter 2.

Mediaeval legend has it that Lilith left Adam after refusing to be subservient to him, and would not return to the Garden of Eden after mating with the archangel Samael, the Angel of Death. She was seen as an alluring but rather frightening female figure.

The myth of Lilith captured the imagination of a number of late-Victorian writers and artists, in particular the Pre-Raphaelites (right), with their interest in mediaeval art and myth. Kipling writes in “New Lamps for Old” (verse 9):

And the Spirit gives them the Lamp of War that burns at the cannonlip,
As it blazed on the point of Tubal’s blade and the prow of the battleship;
And the Lamp of Love that was Eve’s to snatch from Lilith under the Tree…

Daniel Hadas points out that George MacDonald’s novel Lilith is also evidence of contemporary interest in her.

… there are so many chapter headings and poems of a pseudo-antique character which suggest no one member of the Pre-Raphaelite school, that we might almost call Kipling, in one of his moods, a belated Pre-Raphaelite in his own right … “Blue Roses” and “The Oldest Song” … have a slightly antiquated air, without sounding the authentic note Kipling can strike when he wishes.

The joy of an old wound waking There could be an echo here from the charming sestette, “I hear the soft note of the echoing voice…” in Act I of the light opera “Patience” by Gilbert and Sullivan (1881) which Kipling may well have seen:

See also Kipling’s “Hymn to Physical Pain” which precedes “The Tender Achilles” in his last collection of stories, Limits and Renewals (1932).