[Heading] This Heading of five lines was first collected in Songs from Books, 1912. See also the heading to Chapter XIX of The Naulahka.

The verse fits well with Tarvin’s horror of the chuckling Cow’s Mouth and the tank below, where ‘the sacred crocodile was waiting for his morning meal.’ [P.H.]

[Page 153, line 15] heathen Kipling used this word in the first edition of Kim but he altered it in subsequent editions. The Naulahka was printed earlier than Kim: it could have been amended also.

[Page 153, line 16] Salt-lick a place where the ground is so impregnated with salt that wild animals come to lick it. It could also be a place where an artificial preparation of salt is placed for cattle and sheep to lick.

[Page 153, line18] cracker-boxes as it is an American speaking, this refers to the boxes in which crackers, i.e., thin, hard biscuits, are sold. 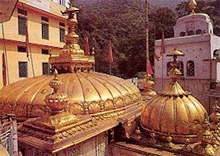 [Page 154, line 11] Burning Mouth this is Jawalamukhi, 34 km South of Kangra, a popular Hindu pilgrimage site at the Devi Temple (right) , set against a cliff. There, from a fissure, a natural gas flame burns.

[Page 154, line 14] Devil’s Mouth Hard to pin point where in South India this could be, as there are several sites in Karnataka and Tamil Nadu that could lay claim to the reference. Many rural villages in these areas have their own demonology, and their particular terrifying guardian deities. But the candidate for the universal Hindu title of Devil is Ravana, who abducted Sita, and was finally destroyed by the Great God Vishnu in the guise of Rama.

Two locations come to mind: Hampi—bearing in mind Kipling’s penchant for ruins and deserted ancient cities [eg “Cold Lairs” in “Kaa’sHunting” in The Jung;le Book], where there are temples along the riverside. (1) Sugrivas Cave: here Sita is said to have dropped her jewels as she was abducted; and (2) the temple on Rameswaram island, where according to legend, Ravana’s brother Vibishana surrendered to Rama. But the writer/s linking of the Devil’s Mouth with Buddhism makes all this impossible, and suggests that the mention is a carelessly thrown away phrase.

[Page 154, line 21] there was only one Cow’s Mouth a reference to the one at Chittorgarh, described in detail in Letters of Marque XI in Vol I of From Sea to Sea (p. 101), where Kipling fled in horror from the sinister atmosphere.

[Page 154, line 31] voluntary immolation on the pyre known as Suttee. In Kipling’s day Hindu widows were, according to tradition, burnt to death on their dead husband’s pyre.

[Page 155, line 19] from Rhatore to Gunnaur Gunnaur is the name given here for the dead city of Chittor, or for a railway station only 4 miles away. It is to be noted that there is a real place, Gunnaur, in what was the N.W. Frontier Province, now part of Pakistan.

[Page 155, line 23] Kutcha this means rough, temporary, not properly made; the opposite of pukka, which means ‘ripe’ ‘complete’, ‘good’.

[Page 156, line 2] a hole of peculiar sanctity The Holy Ganges, the great river, rises in a glacier which has also been given the name Gye-Mukh or Gowmukh, “The Cow’s Mouth”.

[Page 156, line 20] Cabuli or Kabuli; a breed of horse from Afghanistan near Kabul.

[Page 156, line 27] Kathiawar another splendid breed of horse used by the British Raj for the Indian Cavalry. The British Cavalry rode “Walers” from Australia. Kathiawar is a peninsula to the N.W. of Bombay city.

[Page 156, line 30] Deolee Deolali near Poona, where British soldiers suffering from heat-stroke were hospitalised to recover. Among the symptoms of heat-stroke were high fever and delirium. Hence “gone Dulali”, mad with Dulali-tap. Tap is Hindi for fever.

[Page 158, lines 2, and 8] trot in trotting, a horse lifts its fore-foot and the hind-foot of the opposite side at the same time. The suggestion here is that the trot is not suitable for a long journey and that the canter is more natural and less tiring for horse and rider.

[Page 158, line 6] galoot a slang word, probably of Irish origin, for a crude loutish person. Occasionally used in England with the general meaning of “silly ass”.

[Page 158, line 20] Cotton-wain wain is the Anglo-Saxon word for a wagon. Carts laden with bundles of cotton were a common sight on the roads in Rajasthan at certain times of the year.

[Page 159, lines 1 to 5] a stick loaded with tingling bells This was the normal method of carrying the mail in outlying districts.

[Page 159, line 11] porcupine a rodent the size of a small pig, with spines. It has a pungent scent and makes easy hunting with hounds.

[Page 159, line 18] A rupee although it was then worth only 16 pence it was quite a good sum of money to people in country districts, and represented a week’s wages for many classes of work in the 1880s.

[Page 160, line 3] fertile Gujarat, which includes the country from the Gulf of Cambay on the Arabian Sea (part of the Indian Ocean) to the Rann of Cutch (Kachch) is known to be very fertile. It is not much above sea-level.

[Page 160, lines 15-21] It bore on its breast s ship, like a gigantic montor with a sharp bow … Compare this description of Chitor with that given in Letters of Marque XI in Vol I of From Sea to Sea (p. 94).

[Page 160, line 22] We are nearly there the starlit ride across the desert was quite real to Kipling. In March, 1884 he went to Patiala State in the train of Lord Ripon, the Viceroy, and forestalled his newspaper rivals in getting off a despatch by riding 30 miles at night on a borrowed horse; see Charles Carrington(p. 56).

[Page 162, line 31] the loom of the night usually a seaman’s term for land on the horizon seen through mist or as dawn breaks.

[Page 163, line 23] kite a common bird in all parts of India and Pakistan. The great scavenger of the sub-continent.

[Page 164, line 25] crow’s-nest a sort of barrel fixed to the mast of a ship as a shelter for the look-out man—particularly used on whaling ships.

[Page 169, line 8] lantern (also Page 173, line 33—a torch) At that time and for quite a number of years afterwards lanterns, burning candles or special oil were used for lighting.