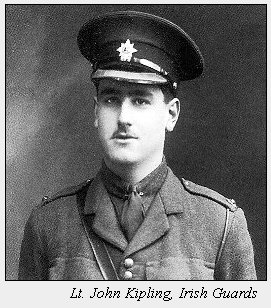 This poem is the prayer of a mother whose son has been lost in the War. It closely parallels the experience of Carrie and Rudyard Kipling, whose only son John was reported missing on 27th September 1915 in the Battle of Loos. For years his parents sought definite information on his fate from survivors of the battle. No-one had definitely seen him die, so they were left in uncertainty, with diminishing hope that he might be lying unrecognised in some hospital or unreported as a prisoner of war.

According to the Holts (p.161), not until October 1918 did they get a credible account from a sergeant who saw him shot through the head and who laid him dead in a shell-hole. They seem to have accepted it as the end of the matter. What they now needed was to find John’s body and to have a grave and a focus for their grief.

So when this poem was first published on 23rd December 1916, all was still completely uncertain. Hence the recurring lines:

A nativity is a birthday. The Nativity is the feast of the birth of Jesus, Christmas Day, 25 December. This explains the timing of publication, and the extensive biblical references.

In 2 Kings 4, the wonderful story about the Shunnamite woman, ‘it is well’ is more ambiguous than it looks. Elisha had promised the woman that in return for her generosity, a son would be born to her. This happened – but then one day the boy collapses saying ‘My head, my head’; he is taken home and dies. The mother goes to Elisha, who sends his servant Gehazi to ask ‘Is it well with thee? Is it well with thy husband? Is it well with the child?’ And she answers, ‘It is well’ – which of course it is not.

The mother then approaches the prophet. Gehazi tries to wave her off, but Elisha stops him saying ‘She is vexed in her soul’. She then reproaches Elisha with having promised her a son who did not live. Elisha goes with her, and enters the room where the boy is lying, and prays and prays again – and the boy suddenly sneezes, and comes back to life.

So if you read the poem with that story in mind, the refrain – and especially its closing version – looks ambivalent: beneath the surface consolation that the son has died in a holy cause, floats this story of desperation – ‘It is well’ was a lie and a desperate hope, if there is such a thing. It’s only a subtext, but there’s a hope or wish that the son might just be brought back, just as the Shunnamite woman’s son was brought back to life. It was only a bit more than a year since John Kipling had disappeared, and perhaps a part of Rudyard still hoped against hope for a miracle – perhaps like the one he had invented in Captains Courageous (ch. vii) when the fishing smack Jennie Cushman is run down. The waif Pennylvania Pratt suddenly rediscovers his identity as a Moravian preacher, and by his prayers the skipper’s son is miraculously preserved from drowning. [J.M.]

J M S Tompkins (p. 216) cites this poem as an example of Kipling’s use of Christian themes:

Later in his life, he turned sometimes to the language and figures of the Christian faith. He does this very seldom, and always at a remove. The ballads of “Cold Iron”, “Eddi’s Service” and “Our Lady of the Sackcloth” have the reserve of their traditional form, and “A Nativity” is shaped as a dramatic lyric.
… If we look for doctrine, we find only the most universal utterances – there is no god but God; all is Spirit; suffer the little children … 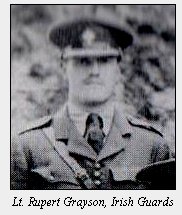 Tonie and Valmai Holt (p. 119) quote Rupert Grayson, a fellow-officer of John’s in the Irish Guards. He had visited Bateman’s with John, been wounded in the 27th September attack and was a frequent visitor to the Kiplings during his convalescence.

One of the poems he was working on was “A Nativity” published in 1916. In it, Rupert felt: “he expressed his overwhelming loss and the barren content of his life.” Two verses struck him as moving expressions of the parents’ grief for John:

The Cross was raised on high;
The Mother grieved beside-
But the Mother saw Him die
And took Him when he died…

“Is it well with the child, is it well?”
The watching mother prayed.
“For I know not how he fell,
And I know not where he is laid…”

On the following page the Holts quote Rupert again:

“[Kipling] would talk on every kind of subject in his unique way, a spicy mixture of biblical invocation and barrack-room slang. He would take a volume from the shelves and read passages that appealed to him, but his favourite reading was The Book (The Bible), and his knowledge of it was tremendous….”

Although Kipling was not religious in the traditional manner that would have made him turn to God or even to a priest for comfort, nevertheless the familiar, resonant words of the King James Bible would have offered some reassurance at this painful time. As was manifest in “A Nativity” and other works written in his grief for John, he often identified with God who had also lost a Son in a cruel manner.

[line 1] in the manger And she brought forth her firstborn son and laid him in a manger. Luke 2,7.

[line 9] I know not where he is laid Mary Magdalene finds Jesus’ tomb empty on Easter Sunday. Two angels ask her: Woman, why weepest thou? She saith unto them, Because they have taken away my Lord, and I know not where they have laid him. John 20,13

[line1] A Star stood forth in Heaven Now when Jesus was born … there came wise men from the east to Jerusalem, saying, Where is he that is born King of the Jews? For we have seen his star in the east. Matthew 2,1-2

[line 2] The Watchers ran to see/ The Sign of the Promise given
When Jesus was born, there were in the same country shepherds abiding in the field. And lo, the Angel of the Lord came upon them. And the angel said unto them, Behold, I bring you good tidings of great joy. For unto you is born this day in the city of David a Saviour, which is Christ the Lord. And this shall be a sign unto you; ye shall find the babe lying in a manger.

And it came to pass, as the angels were gone away from them into heaven, the shepherds said one to another, let us now go even unto Bethlehem, and see this thing which is come to pass, which the Lord hath made known unto us. And they came with haste, and found Mary, and Joseph, and the babe lying in a manger. Luke 2. 8-16.

[line1] The Cross was raised on high; The Mother grieved beside Now there stood by the cross of Jesus his mother.. John 19.25

[ line 6] Seemly and undefiled/ His burial-place was made Now in the place where he was crucified there was a garden; and in the garden a new sepulchre, wherein was never man yet laid. There they laid Jesus. John 19,41-2

[line 1] On the dawning of Easter Day
Comes Mary Magadalene;
But the Stone was rolled away,
And the Body was not within.

The first day of the week cometh Mary Magdalene, and seeth the stone taken away from the sepulchre. Then she runneth, and cometh to Simon Peter, and to the other disciple, whom Jesus loved, and saith unto them, They have taken away the Lord out of the sepulchre, and we know not where they have laid him. John 20,1-2

And suddenly there was with the angel a multitude of the heavenly host praising God, and saying, Glory to God in the highest, and on earth peace, good will towards men Luke2,13-14. Kipling can see no sign of the end of the War – it still had almost two years to run.

[line 6] for Whom he fell the use of the capital shows that “Whom” refers to God. The mother realises that her son fell fighting a Holy War against evil (Kipling sincerely believed that this was true) and this gives her some consolation. In the last line, although she still does not know how he fell or where he is laid, she accepts that “It is well —it is well with the child!”