This is one of the many military verses written by Kipling in the 1890s. An experienced soldier, probably a Private of some years service, is addressing a group of new recruits, explaining that they should keep themselves clean and their buttons polished, take on any job they are given without complaint, avoid going on about their rights, mind their language, and buy the beer for their comrades to show gratitude for the good advice they are getting, as recruits in the British Army have always done.

The formal training of recruits was a matter for officers and NCOs. But it was from the experienced men who shared their barrack rooms that they learned what it took to turn themselves from slovenly civilians into soldiers who could take pride in themselves.

in “The Incarnation of Krishna Mulvaney” (Life’s Handicap p. 37), the Colonel remarks that he is reluctant to give Mulvaney detention for absence without leave:

… when I most want him to lick the new batch of recruits into shape. I never knew a man who could put a polish on young soldiers as quickly as Mulvaney can. How does he do it?.

See “Troopin’”, “The Young British Soldier” and other Barrack-Room Ballads, The Seven Seas, and The Five Nations.

Also among the stories, Soldiers Three, “His Private Honour” in Many Inventions, and “The Brushwood Boy” in The Day’s Work (pp. 368-70).

Of Kipling’s verse of this period,
Charles Carrington writes (p. 212): 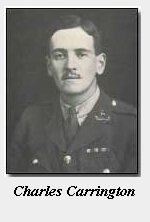 No author in any literature has has composed, in verse or prose, so full and varied and so relentlessly realistic a view of the soldier’s life, with its alternations of boredom and terror, its deadening routine, its characteristic vices and corruptions, its rare glories and its irrational fascination, as Rudyard Kipling in the series of verses he produced in the next two years.

He then lists ten poems written between 1894 and 1896, including this one:

If he had written nothing else, this group of ballads, from which many lines have become familiar quotations, would preserve his name as long as soldiering remains the unavoidable lot of half-willing young men.

George Orwell, a fierce social critic, who served in the Burma Police, and as a volunteer soldier against General Franco in the Spanish Civil War, finds Kipling’s imperialism and streak of brutality indefensible, but is impressed by the truth of the army prose and verse: 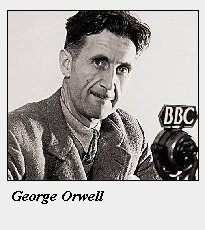 How complete or truthful a picture has Kipling left us of the long service, mercenary army of the late nineteenth century ? One must say of this, as of what Kipling wrote about nineteenth century Anglo-India, that it is not only the best but almost the only literary picture we have.

He has put on record an immense amount of stuff that one could otherwise only gather from verbal traditions or from unreadable regimental histories.

Perhaps his picture of army life seems fuller and more accurate than it is because any middle-class English person is likely to know enough to fill up the gaps … But from the body of Kipling’s early work there does seem to emerge a vivid and not seriously misleading picture of the old pre-machine-gun army – the sweltering barracks in Gibraltar or Lucknow, the red coats, the pipeclayed belts and the pillbox hats … future generations will be able to gather some idea of what a long-term volunteer army was like. 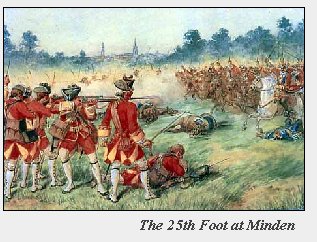 [Title] Minden is a city in Westphalia, Germany, the site of the battle fought on 1 August 1759 during the Seven Years’ War of 1756-1763, a victory for Britain Hanover and Prussia over France, Russia, Austria and Spain.

Kipling had a vivid sense of the long history of the common soldier, and the battles he had fought in. See Peter Keating’s notes on ”Brown Bess”.

Why Minden? Who were the men that fought there?

Initially Kipling links Minden with Waterloo (triumph) and Maiwand (disaster) but Minden was a battle where triumph was wrested from disaster, where despite the British and Hanoverian infantry advancing without orders and unsupported, their steadiness and determination carried the day. They repulsed repeated French cavalry charges, giving time for the Prussian contingent to engage the French as well. As Corelli Barnet (Britain and Her Army, 1509-1970, Allen Lane 1970) puts it:

It was an amazing performance for unsupported infantry to defeat cavalry this way.

That the French escaped from the field even after heavy losses was unfortunately due to the British cavalry commander, Lord George Sackville, failing to obey repeated orders to charge. Corelli Barnet goes on to say:

I think that Kipling was drawing on this legend in holding up the men that fought at Minden as an example that newly recruited soldiers should follow.

Charles Carrington, in his notes on The Complete Barrack Room Ballads, says that: ‘It is not known which of the Minden Regiments Kipling had in mind’.

I do not believe that Kipling ever had just one regiment in mind but all those who were given ‘Minden’ as a battle honour. These units were:

In fact, the infantry were not entirely unsupported. Two Royal Artillery batteries deployed with them and were given the honour title ‘Minden’. They are now:

Minden Day, 1 August, is probably still the most important internal annual event in the lives of all these units. [R.C.A.]

Kipling became a Freemason during his time in India, and many years later wrote several stories set in Masonic lodges. See our notes on “In the Interests of the Bretheren”, “The Janeites”, “A Friend of the Family”, and “A Madonna of the Trenches”, all in Debits and Credits. See also “Kipling and Freemasonry” in
Norman Page (p. 185).

Waterloo the great battle on Sunday 18 June 1815 near Waterloo in Belgium when a French army under Napoleon was defeated by a British army under the Duke of Wellington and a Prussian army under Blücher; the last and decisive battle of the Napoleonic Wars, and the end of Bonaparte’s rule as Emperor of France. 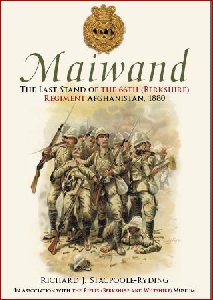 Maiwand a disastrous battle of the Second Afghan War of 1878-1880, when a British army was defeated by the followers of Ayub Khan. See Maiwand: The Last Stand of the 66th (Berkshire) Regiment in Afghanistan, 1880 by Richard J. Stacpoole-Ryding.

dam’ An abbreviation of ‘damnation’, a common swearword.

sweeps ‘chimney-sweeps’ – dirty from their work.

We’ll learn you slang for ‘We will teach you’.

mustn’t swear or curse not only bad manners, but contrary to Regulations.

stocks in this context high, tight neckcloths of fabric or leather worn by soldiers in the eighteenth century. See Peter Keating’s notes on ”Brown Bess”, lines 13-14.

fatigue in this context a term for work by soldiers of a domestic nature, sweeping, cleaning, carrying coal, etc.; sometimes awarded as a punishment. [one of our Editors spent Coronation Day in 1953 on Cookhouse Fatigue, taking swill to the pig-sties.]

anarchistic anarchists were and are against all political authority, and in the nineteenth century were prone to violent acts, such as throwing bombs or leaving them to go off in public places.

‘and grenades hand grenades, small bombs, the size of a cricket ball, for throwing in close combat. See “A Friend of the Family” (Debits and Credits).

Two – an’ – twenty dozen A dozen is twelve, thus twenty-two dozen is 264. Military uniforms of the period had many buttons which required cleaning, but this is perhaps an exaggeration.

musketoons short- barrelled versions of the musket used at sea and by cavalry. Fourteen syllables are required in this line, which is probably why the word is used. See Peter Keating’s notes on ”Brown Bess”.

‘albardiers halbardiers, soldiers armed with the halberd, a weapon of the 15th and 16th centuries having a blade like an axe and a steel spike on the end of a long shaft. They were carried by sergeants in some regiments in later years.

yuss the soldier’s pronunciation of ‘yes’.

got it with the toe a kick

six-year men This makes it clear that Kipling’s speaker is a soldier nearing the end of his six-year engagement. [R.C.A.]
See “The Big Drunk Draf’” (Soldiers Three, p. 33, line 25).

‘Eaven is your ‘elper ‘Heaven is your helper’, or more commonly ‘Heaven help you !’ A phrase with a Biblical echo, implying that you are in deep trouble. Roger Ayers writes: I think this is a reference to Deuteronomy 33, 26: ‘There is none like to the God of Jeshurun, who rides on the heaven in your help …’ The sense of Kipling’s line is that heaven has come to the aid of the recruit in the shape of the old soldiers who will teach him all he needs to know. [R.C.A.]

We’ll learn you slang for ‘We will teach you.’

Core The soldier means ‘corps’, the wing of the Army that his regiment belongs to. Roger Ayers writes: In dictionaries with phonetic spellings, these are both given the same pronunciation so it looks as though Kipling was trying to indicate something else, possibly that the uneducated speaker was repeating what he had heard rather than what he might have read – when he might have pronounced it as ‘corpse’. An argument built on slight foundations, but why otherwise would Kipling have misspelt it? [R.C.A.]

`Yes, you may well look sheepy,’ Ortheris
squeaked to the boys. ‘It’s the likes of you
breaks the ‘earts of the likes of us. We’ve got
to lick you into shape, and never a ha’penny extry
do we get for so doin’, and you ain’t never grateful
neither. Don’t you go thinkin’ it’s the Colonel
nor yet the company orf’cer that makes you. It’s
us, you Johnnie Raws – you Johnnie bloomin’
Raws!’

A company officer had come up unperceived
behind Ortheris at the end of this oration. ‘ You
may be right, Ortheris,’ he said quietly, `but I
shouldn’t shout it.’ The recruits grinned as
Ortheris saluted and collapsed.