This poem accompanies “The Knife and the Naked Chalk” in Rewards and Fairies (1910) and is closely tied to the theme of the story.

Room for his shadow on the grass See “The Knife and the Naked Chalk” p. 136 line 9: ‘no man stepped on my shadow; and I knew that they thought me to be a God’.

the great god Tyr In Norse legend, the wolf Fenrir (or Fenris) was the son of the god Loki. The Aesir (the Norse gods) brought him up; Tyr in particular fed and looked after him. Fenrir grew stronger and fiercer every day until the gods became afraid of him and decided he must be chained up before he grew any stronger. Thor with his hammer forged a mighty chain. Fenrir let himself be chained, and easily broke loose. Thor made a second chain, twice as strong: again Fenrir snapped it.

So the gods asked the dwarves for help, and they made a magic chain called Gleipnir. They made it from the noise of cats’ footfalls, the beards of women, the roots of rocks, the sinews of bears, the breath of fishes and the spittle of birds. It was as light as thistledown, and so slender that Fenrir suspected a trick. But in the end, as Annie and Eliza Keary write, he said:

“Lest you should doubt my courage, I will consent that you should bind me, provided one of you put his hand into my mouth as a pledge that no deceit is intended.”
At length Tyr stepped forward valiantly, and put his strong right hand into the wolf’s cruel jaws.

At this signal, the other Aesir threw the chain round the monster’s neck, bound him securely with one end, and fastened the other to a great rock. When he was bound, Fenrir rose, and shook himself, as he had done before; but in vain he raised himself up, and bounded forward – the more he struggled the more firmly the slender chain bound him.

At this sight the Aesir set up a loud shout of joy. Only Tyr was silent, for he had lost his hand. 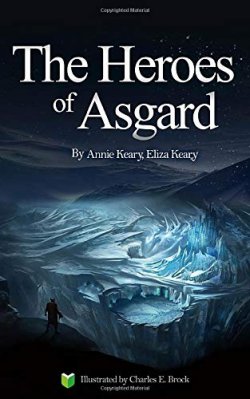 But Fenrir is safely bound till Ragnarok – the final battle of the Twilight of the Gods.
See The Heroes of Asgard by Annie and Eliza Keary, first published in 1870, which Kipling clearly had in his library at Bateman’s. In Puck of Pook’s Hill (p. 16 line 20) Puck says:

“I think he claimed kin with Thor of the Scandinavians.”
“Heroes of Asgard” Thor?’ said Una. She had been reading the book.

Shepherd-of-the-Twilight/ Feet-in-the-Night/Dog-without-a-Master/ Devil-in-the-Dusk Nicknames for the Wolf. The Flint Man is afraid to speak his real name in case that summons him. See the story p. 123 line 27. For Feet-in-the-Night see p. 124 line 2 et seq.