[Title] Aurelian (Latin): Lucius Domitius Aurelianus Augustus; (214 or 215 – 275), Roman Emperor from 270 to 275. During his reign, he defeated the Alamanni after a devastating war, also numerous ‘barbarians’, including Goths, Vandals, Juthungi, Sarmatians, and Carpi.

[Page 107] ride with an unused heel the young horse has never felt the spurs, which are worrn on the heels of the rider’s boots

colt Literally an entire (uncastrated) male horse under four years old; figuratively, a young man still in training for whatever work he will be doing.

curb a chain or strap attached to a horse’s bit .

rowelled steel a little spiked wheel on a spur.

Life’s Handicap Rather than being a quote from an existing poem, this verse will have been written by Kipling to head this story. It expressed his deeply felt belief that to do good work, men must be subjected to firm discipline, as he was as a young journalist at the Civil and Military Gazette. He used the title, with its echo of a horse made to run a race under the weight of a handicap, for his later collection of Indian stories, published in 1891.

[Page 107, line 1] Tract a short treatise on morals, religion, politics or some worthy cause like teetotalism.

[Page 107, line 8] exported sent out from the United Kingdom – a word usually applied to goods but here used with a touch of irony

This trick, which occurs several times in his earliest stories, is, of course, not to be taken seriously. Nevertheless, it has an air of being a discreet disclaimer of literary pretensions that his Sahib public would think affected. Anyway, the device is significant – what other writer of his calibre would have used it ?

[Page 107, line 13] Spencer Herbert Spencer, (1820–1903} a railway engineer who became Editor of the Economist newspaper and a philosopher, publishing several books on a Theory of Evolution. He was highly influential in academic circles in the 1880s and 90s, and is one of the founding fathers of modern social theory.

[Page 108, line 14] Town in this instance, London. For the English middle classes of that time – and to some extent still today – going ‘up to town’ meant going to London.

[Page 108, line 18] Metropolitan Board of Works founded in 1855 to modernise the government of the area that became the County of London in 1889. There have been periodical boundary and administrative reorganisations ever since.

[Page 108, lines 26 – 33] The Deputy… a good representation of the chain of command of the Government of India – see also “Her Majesty’s Servants”, in The Jungle Book)

Strictly speaking the Secretary of State for India would have been responsible to Parliament in London, but he was considered to be the representative of the Crown as far as Indian affairs were concerned, so this over-simplification is more or less correct.

[Page 109, line 13] Wesleyan preachers John Wesley, (1703–1791) was the founder of English Methodism. Both of Kipling’s grandfathers were Methodist preachers.

[Page 109, line 26] Blastoderm This sounds like an invented word. pachyderm means ‘thick-skinned’, hence blastoderm’ could loosely mean ‘a confounded thick-skinned nuisance’. (The word literally signifies the germinal membrane enclosing the yolk of an impregnated ovum, but despite the scholarly inclination of many members of the Indian Civil Service, McGoggin’s colleagues – or indeed Kipling – were probably not aware of this: Ed.)

[Page 109, line 32] Frontier the North-West Frontier with Afghanistan, scene of many of Kipling’s stories about soldiers and administrators.

[Page 110, line 3] Secretariat Before the adoption of the portfolio system in the Government of India, business was dealt with by the Governor-General in Council. As business increased however, the work of the various departments was distributed amongst the members of the Council, and the more important cases dealt with by the Governor-General or the Council collectively. See “Tods’ Amendment” later in this volume.

[Page 110, line 14] halter in this context a light leather or rope strap forming a headstall for a horse – no bit, so the animal would be difficult to control if not very placid.

[Page 110, line 18] perjured to the gullet developed from the melodramatic expression “You lie in your gullet !” like the cases above where all parties concoct a tissue of lies. See “The Bronckhorst Divorce-Case” later in this volume for an example.

[Page 110, line 29] over-engined for your beam Kipling probably means by this nautical expression that McGoggin worked too much, and worried and fretted. This would have made his heart beat too fast and might have raised his blood-pressure. The hypertension could have caused the rupture and haemorrhage from a blood-vessel in the part of his brain that controls speech or he could have developed a blockage by atheroma in such a blood-vessel.

Whichever it was, it would have damaged that part of his brain, and it would not recover until a collateral circulation supplied the area, always supposing recovery was possible. I don’t think the Doctor would have been able to say definitely he’d be unfit for work for three months. Nowadays it would be called a cerebro-vascular accident, or if of very short duration (usually minutes or hours) a transient ischaemic attack. [G.S.]

[Page 110, line 33] the Rains the South-West Monsoon which brings the Rains in nothern and western India; a welcome relief from the Hot Weather mentioned many times in Kipling’s works, in particular “At the End of the Passage” in Life’s Handicap. (‘Monsoon’ comes from the Arabic mausin, meaning a time or a season.)

[Page 111, line 15] The Pioneer an English-language newspaper in Allahabad to which Kipling was transferred in November 1887 soon after this story was published. See Something of Myself and Carrington, p.89.

[Page 111, line 23] Calcutta Mercantile Advertiser we have not traced this journal. Kipling may have invented it. 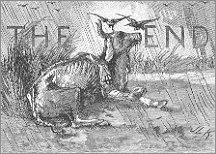 This gruesome picture of a dying bullock, with what are probably kites heading for him, is from Beast and Man in India, by Kipling’s father, Lockwood.

[Page 112, line 15] aphasia loss of the power of speech due to injuries to the centres of the brain that control this activity. [Black’s Medical Dictionary]

[Page 112, line 19] bromide of potassium Bromides are used for their sedative action in insomnia due to anxiety or restlessness and in nervous hyperexcitability. They are useless in sleeplessness due to pain. They were, at one time, the standard treatment for epilepsy. [Martindale’s Extra Pharmacopoeia, 25th Edition, 1967]

[Page 112, line 21] ’ Punjab Head’ forgetfulness or mental confusion experienced by European settlers in India and elsewhere, said to be caused by exposure to a tropical climate. [Oxford English Dictionary]