“McAndrew’s Hymn” was first published in December 1894, in Scribner’s Magazine, though the heading in the Definitive Edition gives the date 1893, the year in which Kipling started to write the poem. It is the second of his three conversation pieces which owe a great deal to Robert Browning: the others being “Tomlinson” (published 1892, started 1891) and “The Mary Gloster” (published 1896, started 1894). The poem was first collected in The Seven Seas (1897)

The title of the poem

In at least some editions of The Seven Seas (1896) in which it was first collected, the title is spelt “M’Andrew’s Hymn”, and some critics also used ‘M’Andrew’. However, the Definitive Edition is definite – it is ‘McAndrew’. And Kipling himself, when he wrote to Edward Burlingame, Editor of Scribner’s Magazine, to acknowledge receipt of the galley proof of the poem [The Letters of Rudyard Kipling, Vol 2, Ed. Pinney, 1990, letter dated 21 August 1894], writes “McAndrews Hymn”. Three days later, Kipling wrote to the illustrator, Howard Pyle (see below) using ‘McAndrew’ and this time was careful to insert the apostrophe – ‘McAndrew’s’. For consistency we have used ‘McAndrew’ throughout these notes.

From the outset this was seen as a very important and valuable piece of work. Charles Carrington in Rudyard Kipling, His Life and Work (Macmillan 1955) notes (p. 211) that Henley, the Editor of the National Observer “could not afford to pay more than fifteen guineas for “The Dove of Dacca” in April 1893. Not many months earlier Rudyard had been glad to accept that sum for the “Bolivar”; it now seemed a poor return for an author who already commanded $100 [£25 at the then rate of exchange] per thousand words for his prose, and was likely to double that sum shortly. Scribners gave him $500 for “McAndrew’s Hymn”, a record price for a poem in America.”

It seems certain that the inspiration for this piece must have come from Kipling’s conversations on board ship during his trip home from India with the Hills in 1889, and his subsequent voyages in 1891 and 1892. The outward leg of his 1891 voyage covered the first half of McAndrew’s round voyage, and as shown by Kipling’s letter quoted below, was the source for most of the background material.

Carrington, notes (p. 209) that in the late autumn of 1893 “there came an evening when Kipling confided to his wife that he had received an access of power, the ‘return of a feeling of great strength, such as he had when he first came to London and met the men he was pitted against.’ … At the time when he admitted Carrie to this secret, he was engaged upon “McAndrew’s Hymn”, the most elaborate and perhaps the most effective of his dramatic lyrics. It launched upon the world the new concept of the romance of machinery, a notion which he expressed succinctly a few weeks later in the lines:

Confound Romance! … And all unseen
Romance brought up the nine-fifteen.”

And in December 1893, notes Carrington (p. 212), “Carrie reported him as humming and strumming all over the house with rhythmical experiments. The hymn-tune, ‘The Church’s One Foundation’, gave him a set of rhythms which he used, in part at least, for “McAndrew’s Hymn”.”

It is a narrative poem, and it will perhaps be helpful to one’s understanding to describe the background and setting, as they become apparent from the narrative.

The narrator is Mr McAndrew, the Chief Engineer of a cargo-liner which makes round trips from the UK to New Zealand via the Cape of Good Hope, and back via Cape Horn. He is elderly and experienced, indeed, he is the senior Engineer of his Line, and as such attends Board meetings of the company which owns it, when he is in port. (Such things are described in more detail in “Bread upon the Waters”. In that tale, the relationship between McPhee – the McAndrew equivalent – and MacRimmon, the ship owner, is seen as being one of near equals.) The Line is evidently a largish one: the Board has three peers as members, some of whom might have been there merely to grace the letterhead. The first peerages to prominent shipowners were given, I think, in the 1880s. [can’t find an immediate reference – Mackay (P&O) didn’t become Lord Inchcape until 1911: AW]

McAndrew’s ship is a middling sized one by the standards of the day, being some 6,000 tons or so, but most likely with only a single shaft and propeller (inferred from the text). Most marine steam engines of this period were arranged vertically, with the cylinders, in which the steam pushed the piston up and down, at the top, and the crank-shaft, which was rotated by the connecting rods, at the bottom. They were compound, or triple-expansion engines; in a compound the steam was admitted to a high pressure cylinder, then exhausted, still with some pressure in it, and so capable of more work, into a larger, low pressure cylinder. If one started with a higher pressure, the steam could be passed through three stages to extract the maximum amount of work from the heat stored in it – a triple-expansion engine. The triple-expansion engine only came into general use in the 1880s, so if McAndrew’s ship had one, it would have been an early example.

That is how this reader, at least, has interpreted the circumstances. In fact, we know the author’s own view, because he wrote to the illustrator, Howard Pyle, in August 1894 (see The Letters of Rudyard Kipling, Vol.2; ed. Thomas Pinney, University of Iowa Press, 1990).
In this letter he says:

“… but it may help you a little to know that the ship “McAndrew’s Hymn” belongs to is the old Doric, once an Atlantic White Star I think, and now a Shaw, Savill, Albion boat running to New Zealand via the Cape of Good Hope and home round the horn. She’d be about the same type, in her engine fittings, as the Germanic or the Brittanic (sic) I should say – i.e., in no sense a new boat with any special gear. When I was on her her l(low).p(pressure). cylinder had a play of about an inch and a half on the columns and every piece of machinery had the muffled and protected look of a long-voyage boat. Not a bit like the shiny stuff on a racing Atlantic hotel; but lapped and swathed and junked up and all white with salt-crust.

Carrington confirms (p. 187) that the Doric “followed the great circle route far to the southward to get the advantage of the westerly winds in the roaring forties” (so-called, from the latitude in which the winds blow) “the run that has been made familiar by “McAndrew’s Hymn”.”

Kipling’s letter went on: If you use American machinery for models you’ll get things much too light and graceful, for one can tell the difference between American and English engines as far as one can see them – or hear them, they say who know. McAndrew also is a Scot of the Scots – clean shaven or with a torpedo beard I should say and his uniform would be pretty dingy after a three month voyage.

In regard to the salient points for illustration of the verses I suspect you have already made your own choice. It seems to me that little line touches of hoisting the passengers luggage – the tramp steamer off Sumbawa Head – all nose and stern and funnel [sketch of tramp steamer] and the run of a liner through the misty, ice-strewn south bergs might be worth something.

Then there’s a good wash picture perhaps (a little one) of the couples kissing in the dusk. But I perceive I could go on like this for many pages so I’ll e’en come to an end and leave the matter trustfully in your hands.”

The narration consists of McAndrew’s musings as he stands just below the engine-room skylight, on a platform round the upper end of the cylinders of the main engine, watching with half an eye – and ear – what is going on below him, but aware of conditions and events on deck. 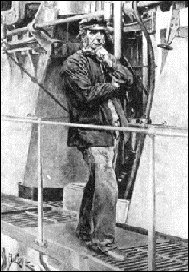 The time at the start of the poem is the beginning of the middle watch (midnight to 4 a.m.), and the ship is on the last leg of her voyage; she will be in Plymouth within the next four hours or so. The musings take the form of one side of a conversation with his God (who doesn’t reply). Peter Keating’s Rudyard Kipling the Poet (p. 106) explains that: “As originally published in Scribner’s Magazine, the monologue was introduced by a fictitious “extract from a private letter” which makes it clear that McAndrew is on deck reminiscing to a passenger: this setting is not apparent from the poem as printed in The Seven Seas”. Certainly, in the text considered here, McAndrew is within the Engine Room, or, just possibly, but not very likely, sitting on the coaming of the Engine-Room skylight, able to see down into the Engine-Room. (See the notes on the text for lines 15, 123, 134-5.)

For interest, we give the text of that fictitious private letter below, noting that, although it is quite short, Kipling did not repeat it in The Seven Seas and subsequent collections:

“. . .and the night we got in, sat up from twelve to four with the Chief Engineer who could not get to sleep either . . . said that the engines made him feel quite poetical at times, and told me things about his past life. He seems a pious old bird; but I wish I had known him earlier in the voyage.”

Peter Keating’s comment above that that fictitious letter “makes it clear that McAndrew is on deck, reminiscing to a passenger” is a perfectly fair inference, but is not necessarily so. On a long voyage, such as this has been, it would have been perfectly normal and acceptable for McAndrew to have invited any passenger who showed an interest in the engines to visit the engine room at an appropriate time. In this case, the passenger has left it a bit late – they will be in Plymouth at about six o’clock tomorrow morning. But we suggest that the references given immediately above all suggest that McAndrew was inside the engine room, though not down ‘on the plates’, and the final form of the verse is undoubtedly that of a soliloquy, and not a conversation.