[Page 17, line 1] Amber, Queen of the Pass The city was originally built by the Meena tribesmen and became the capital of the State of Dhundar founded by Dhola Rae which is now called Jeypore after the city of that name. The name Amber came from Amba, “the universal Mother”, to whom the city was dedicated, and who was also called Ghatta Rana, by the original Meena tribesmen, which means “Queen of the Pass”. (See also notes to Chapter II, page 9, line 7).

[Page 17, line 20] Man Sagar Lake between Jeypore and Amber. The Jal Mahal or the Water Palace was built as a summer resort and pleasure spot by Sawai Pratap Singh in the year 1799 in the middle of this lake. [DP]

[Page 18, line 18] meenas The Meenas, community of Rajputana, are now an agricultural people occupying one of the most fertile regions of the state. The Meena kings were the early rulers of major parts of Rajputana including Amber. [DP] See the Wikipedia entry. 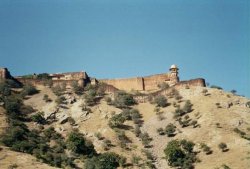 [Page 18, line 26] the red fort of Jeighur this is thought most likely to be what is now known as Jaigarh Fort. It is located on a hilltop overlooking Amber, almost 10 miles from Jeypore, and was built to ensure the security of both Jeypore and Amber. [DP]
See the Jaipur web-site. 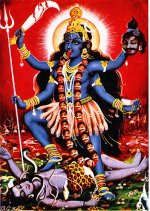 [Page 19, line 23] Kali in Hindu mythology a form of Durga, the bloodthirsty wife of Siva, represented in idols with a black or blue body, a necklace of human heads, and a protruding blood-stained tongue. She is worshipped in particular at Kalighat near Calcutta, with bloody sacrifices.

The fort also has a Kali Temple known as Shila Devi Temple, which is famous for its mysterious history, huge silver lions and silver doors with raised relief. On its doorway, is an image of Ganesha carved from a single piece of coral! Diwan-I-Aam or Hall of Public Audiences is a pavilion of double row of columns. Ganesh Pol leads to the residential apartments of the Maharaja. Jai Mandir or Hall of Victory has a dazzling mirror ceiling and an inlaid panel. Sukh Niwas or Residence of Pleasure has an ivory inlaid sandalwood door. Zenana or Palace of Women has rooms that are connected by a common corridor. It was cleverly designed to give privacy to each queen of the Maharaja. [DP]
See the Jaipur web-site.

[Page 19, line 26] Viollet-le-Duc Eugene Emmanuel Viollet-le-Duc (1814-1879). French architect and writer. Restored Notre Dame 1845-1856. Began the restoration of the fortification of Carcassonne and of Amiens Cathedral. Of highest rank as writer on mediaeval architecture and kindred subjects. His two great dictionaries are standard works. His book Histoire d’une Maison (1873) was clearly known to Kipling, since it is referred to in “An Unsavoury Interlude” (Stalky & Co. page 74).

[Page 20, line 23] lady of light virtue who managed to become possessed of so great a portion of Jey Singh’s library The lady in question is so far unidentified. Sawai Jey (or Jai) Singh II (1688-1743), besides being noted for the building of Jeypore, was also a well-known astronomer. He built observatories at Benares (Varanasi), Mathura, Ujjain, Delhi and Jeypore together with a first-class library. [DP]

[Page 20, line 28] Chief of Birjooghar This probably contains a transposition and should be Birgoojhar (or Birgujar, or Bargujar). See also The Royal Races of Rajput in which it is Tod’s tribe No. 9. [DP]

[Page 20, line 32] Rajore an ancient city in the small state of Deoti held by the Birgoojni tribe (see line 28 above). Dhola Rae, who was married to a daughter of a Chauhan Chief of Moran, with the help of the army of his in-laws captured Dausa and Bhandarej and consolidated his position further by annexing Manch (Ramgarh),and defeating the Bargujar chief of Deoti (Rajorgarh-Paranagar region). [DP]
[Page 21, line 19] The Book of Ezekiel written in stone Ezekiel was the author of one of the Books in the Old Testament. He was one of the priests of Jerusalem who, with Jehoiachin and other members of the upper classes, were deported to Babylon in 597 B.C. by Nebuchadnezzar (see Ezekiel i, verse 3).

[Page 22, line 3] zenana-rooms the rooms appropriated to the females of the household, where they lived in strict seclusion.

[Page 22, lines 17-19] ‘Whose graves are set in the side of the pit …’
Ezekiel 22,23. ‘A lamentation for the fall of Egypt’ ; to the Assyrians, about 660 B.C.
‘Pathros, Zoan, and No’ refers to Ezekiel 30,14. ‘And I will make Pathros desolate, and will set fire to Zoan, and will execute judgement in No.’
These are the Hebrew names for the great cities of ancient Egypt, better known as Aphroditopolis, Tanis and Thebes.

[Page 23, line 5] Vereschaguin Vassili Vereschaguin (1842-1904) the greatest Russian artist of his time, notable for his war paintings, one of which, depicting sepoys blown from the guns in India, aroused much controversy. He died in the sinking of the Russian flagship Petropavlovski on 13th April, 1904.