[Page 155, line 2] Maha Rao Raja Ram Singh, Bahadur (or Maharao). This may be translated as ‘Great Chief, ruler, beautiful, brave lion’, compliments for the ruler of Boondi State. The Raja ruled from 1821 to 1888. [See Chiefs and Leading Families in Rajputana by C.S. Bayley’, Calcutta 1894].

‘Not at all,’ said the King. ‘He’s an Anglo-Saxon Messenger—— and those are Anglo-Saxon attitudes. He only does them when he’s happy. His name is Haigha.’ (He pronounced it so as to rhyme with ‘mayor.’)
[DP]

[Page 157, line 28] Lake Sahib General (later Lord) Lake, who assisted Wellington in campaigns against the Marathas at the beginning of the 19th century.

[Page 159, line 20] four rupees a month such indeed was the pay of native soldiers in these Independent States at the time – i.e., just over £3 a year.

[Page 161, line 27] pice there were 16 annas to the rupee, and 4 pice (Hind. paisa) to the anna. The pice was the smallest coin in use in India, equivalent to the farthing (one quarter of a penny) in Sterling. Used colloquially, as here, for money generally.

[Page 162, lines 10 & 11] ‘Colon-nel Baltah, Agenty Sahib Bahadur’ it is not likely that the real name of this Resident was Baltah.

[Page 162, line 12] Kotah about 25 miles SSE of Boondi on the Chambal River. Three railway lines met there in 1962, one from Ujjain in the south, one from Bharatpur in the north-east, and one from Etawah in the east.

[Page 163, line 25] setons Twists of cotton inserted in a wound to maintain drainage. 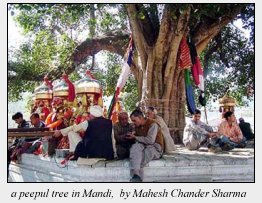 [Page 164, line 30] Peepul a fig tree, also known to the Buddhists as the bo-tree, sacred wild-fig (ficus religiosa). Beneath the tree the Buddha is traditionally supposed to have attained to perfect knowledge.

[Page 166, lines 20-25] The new heraldry of the State … This is a description of the coat or arms of the State of Boondi, expressed in technical heraldic terms.
Or means gold, and as the first colour (or metal) mentioned decribes the color of the upper part of the shield; sable means black; proper means ‘in natural colouring’; In chief means ‘at the top’; second refers to the upper right hand quarter of the shield; vert is green; fessewise means ‘like a knight’s girdle crossing the shield horizontally’. The blazon (heraldic description) given is not quite correct in accordance with English Heraldry.

[Page 167, line 20] Banswara a small state up the Mahi River from the Gulf of Cambay, to the west of Ratlam.

[Page 167, line 26] Dasaratha not the grandson of Asoka, but the legendary King of Kosala, whose queen was Kausalya, the Mother of Rama.

[Page 167, line 28] aswamedha yuga Dasaratha ordered the sacred horse to be released on the north bank of the Gaudak Rivers which was his eastern boundary. This is one of the Scythian rites which connects the Rajputs with the Scythians; it was very expensive and the horse was sacrificed after a year’s liberty on the spot where it was released. All surrounding Kings were invited to the ceremony, for which twenty-one pillars were built. Anciemt Scythia was in south-eastern Europe, in what is now Rumania (?)

[Page 167, line 32] Durga one of the names of Maya, the Queen of the World and the patron goddess of Jodhpur State, who is mentioned by Tod as demanding twelve princes to be sacrificed in the siege of Alla-ud-din.

[Page 168, line 24] Jey Jangal dar Badshah! the ancient English meaning of ‘forest’, as uncultivated wasteland for hunting is paralleled here by the translation of Jangal as ‘waste’.