For a modern description of Boondi (now ‘Bundi’) and its sights, see The Maps of India web-site.
[DP] 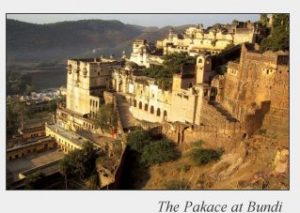 [Page 171, line 23] hanging gardens of Semiramis Queen of Assyria in the 9th century BCE, who is said to have founded Babylon with its hanging gardens, which were 400 feet square and one of the Seven Wonders of the Ancient World. Alexander the Great (356-323 BCE), the King of Macedon, is also said to have gone to India to follow her example.

[Page 171, line 27] the Versailles of India likened to the great Royal Palace of Louis XIII and XIV of France, a few miles south of Paris. Several famous Treaties of Peace
have been signed here.

[Page 173, line 20] Rao Bando the eldest son of Rao Biru, the ruler of Boondi, who died in 1470. Bando dreamed that he met and attacked the spectre of famine riding on a buffalo and was then warned to fill his grain stores. Famine followed in 1486, when he was able to issue free rations of food to the poor and sell the surplus to neighbouring states.

[Page 177, line 30] Sixty-six years ago Kipling was writing at the end of 1887. He was therefore thinking of Tod in the year 1821, and Tod wrote the words quoted on August 5th, 1821. He had in July received letters from Boondi telling of the death of the Rao Raja from cholera. He had 140 miles to travel as the crow flies, yet he had to arrive soon for he had been asked to act as protector both of the young Raja and of the State.

[Page 178, line 12] Rutton Daulat the eye of prosperity, riches, wealth. In
the Maps of India site the Ratan Daulat is described as: ‘a stable for nine horses … built by Rao Raja Ratan Singh.’ [DP]

[Page 181, line 6] hung like Mahomet’s coffin the story that the iron coffin floated in the air at Mecca attracted by lodestones is said to have been invented by Greeks and Romans. Mohammed was buried at Medina; his tomb is a regular object of pilgrimage.