[Page 1, line 2] flying Bombaywards Nearly all British soldiers and civilians serving in India in Kipling’s day took their leave ‘at home’, that is in England or one of the other countries of the British Isles. There was a regular service of mail ships to and from Bombay (now Mumbai), but the word flying was used merely to indicate speed, not air travel; this did not start until the 1920s.

[Page 1, line 5] House of Rimmon the temple of a Babylonian God of Thunder. Naaman is compelled to bow down in the house of Rimmon in order to support his master; see II Kings, 5,18.

[Page 1, line 14] Globe-trotter a visitor who travels very quickly through a country and then claims to know everything about it. An early form of tourist. [DP]

[Page 2, line 6] Indian Bradshaw this was a time-table issued for all the railways of India (and Pakistan) after the pattern of the British one of the same name. The first edition was published in 1866.

[Page 2, line 18] pagri tail-fashion a pagri or puggaree is the narrow length of cloth with which a turban is wound. If the end is left to dangle it is said to indicate that the wearer is a free man. A man in service, like a soldier or an employee should tuck the end in. It is also worn by itself without a helmet.

The name is also applied to the cloth band round a topee (pith helmet), and in the context of the sentence, this is likely to be what Kipling is referring to. [DP]

[Page 2, line 21] the Rajputana-Malwa Line This was a Meter Gauge line which ran from Delhi to Ahmedabad. There was a Junction here with the Broad Gauge (5ft 6in) Bombay, Baroda and Central India (B.B.& C.I.) network that allowed continuation of the journey to Bombay;
see the note by David Page on Railway Development in Rajputana to 1888 for more information. See also the note by Brigadier Mason on The Geography of Rajputana.

[Page 2, line 22] half an hour is allowed for dinner at certain stations on all the lines in India the train stopped and remained longer than was necessary for railway reasons, to enable European passengers to be served with a meal in the Station Refreshment Room. Although these meals were usually of a stereotyped kind, they were sometimes quite nicely cooked and served. 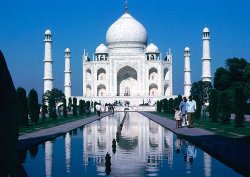 There is no need to add to Kipling’s description of this wonderful tomb as there are so many histories and guide-books available. It was built between 1630 and 1650 at the order of the Moghal Emperor Shah Jehan for his wife Mumtaz Mahal.

[Page 3, line 28] Simla Fine Arts Exhibition these were fairly regular features of life in the summer capital of India up to the outbreak of World War I.

[Page 4, line 13] It was the Ivory Gate through which all good dreams come Homer (c. 900 B.C.) the Greek epic poet, and Virgil (70-19 B.C.) the Roman poet, both refer to this Gate. Homer’s Odyssey Book XIX has this (in translation by Professor A. T. Murray of Stanford University in California):

Then wise Penelope answered again—’Stranger dreams verily are baffling and unclear of meaning, and in no wise do they find fulfilment in all things for men. For two are the gates of shadowy dreams, and one is fashioned of horn and one of ivory. Those dreams that pass through the gates of sawn ivory deceive men bringing words that find no fulfilment But those that come forth through the gate of polished horn bring true issues to pass when any sees them.’

Kipling may not have remembered correctly, or it is just possible he was being ironic and was suggesting that good or pleasantly false dreams came through the Ivory gate.

Ivory in Greek is elephas. The verb elephairo means to cheat with, and by, hopes.
The Greek for ‘horn’ is ken and the verb karanos means to accomplish. But Kipling may simply be thinking of Andrew Lang’s “Ballade of the Real and Ideal” in Ballads of Books (1886) with its Envoi:

Fair dreams of things golden and great,
Ye come through the Ivory Gate;
But the facts that are bleak and forlorn,
Through the portals of horn!

The woods decay, the woods decay and fall,
The vapours weep their burthen to the ground,
Man comes and tills the field and lies beneath,
And after many a summer dies the swan.
Me only cruel immortality
Consumes; I wither slowly in thine arms,
Here at the quiet limit of the world,
A white-haired shadow roaming like a dream
The ever silent spaces of the East,
Far-folded mists, and gleaming halls of morn.

This is the story of Tithonus. In Greek mythology he was the brother of Priam King of Troy, who loved and was beloved by Eos the Goddess of Dawn, who asked Zeus to make him immortal: Zeus granted her wish, but, as she had forgotten to ask for him also the gift of eternal youth, he withered away into an old man in the arms of the immortally youthful goddess. In one version he became a grasshopper.

WHITE, like a spectre seen when night is old
Yet stained with hues of many a tear and smart,
Cornelian, blood-stone, matched in callous art:
Aflame, like passion, like dominion cold,
Bed of imperial consorts whom none part
For ever (domed with glory, heart to heart)
Still whispering to the ages, ‘Love is bold
And seeks the height, though rooted in the mould’:
Touched, when the dawn floats in an opal mist
By fainter blush than opening roses own;
Calm in the evening’s lucent amethyst;
Pearl-crowned, when midnight airs aside have blown
The clouds that rising moonlight faintly kissed;
—An aspiration fixed, a sigh made stone.

Keene was also the author of The Fall of the Mogul Empire (1887). 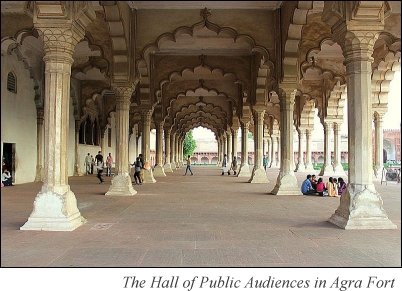 [Page 5, line 7] Agra After spending his leave during the 1887 hot weather in Simla Kipling went back to the Civil and Military Gazette in Lahore, but not for long, as he was transferred to the Pioneer office in Allahabad during that autumn of 1887. From the Letters of Marque, he may have gone direct to Agra from Lahore for this tour before going to Allahabad, or he may have reported there and then started the Rajputana journey almost at once.

However, if he had gone from Lahore, the most direct route to Jeypore went via Delhi, by-passing Agra altogether. And since he records seeing the Taj Mahal before ‘the train ran in under the walls of Agra Fort’, this suggests that he approached Agra from the east. That he did indeed start from Allahabad is shown by a letter that he wrote from Allahabad to his first publisher, Thacker Spink & Co on 20 November 1887:

I go out into the desert tomorrow and it will be hopeless to find me there. If you get the Third Edition of the D D’s (Departmental Ditties) ready by 20th of December I shall on that date be able to correct them and will send them back to you at once. I shall then be in Allahabad for fourteen days preparatory to starting out on another tour of six weeks or more.

This letter sets out the dates and confirms the sequence of his tours which he described in his letter to Margaret Burne-Jones of 24 January-25 March 1888 (Letters Vol. 1, pp.149-156), which he started to write in Jamalpur, a place described in “Among the Railway Folk”. Quite clearly he started off westwards for Rajputana on 21 November 1887, planning to return by 20 December 1887, before heading off eastwards on 3 January 1888 towards, Jamalpur, Giridih, Ghazipur, and Calcutta.

It was as Divisional Commander at Agra that ‘Stalky’ finished his military career in 1923. He was then Major-General L.C. Dunsterville, C.B,, C.S.I. [DP]

[Page 6, line 4] Palais Royal patterns the French Parisian style of the “Second Empire” or a later nineteenth century imitation of it.

[Page 6, line 4] aniline blue the blue dye derived from indigo had been one of India’s natural resources. Originally from Gujarat on the west coast, the British had also established plantations in Bengal. The trade flourished until the German chemists developed a blue dye derived from aniline, introduced in 1860, which effectively killed off the indigo trade. [DP] 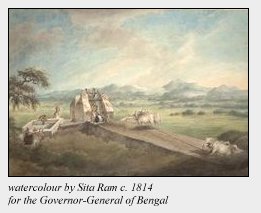 [Page 6, line 26] the wheel and inclined plane system at that time water was drawn from a well by dropping a leather bag into the well, where it filled up. A pulley wheel was fixed above the well-head and the rope attached to the leather bag passed over the pulley where it was attached to two bullocks (nearly always white or whitish). The bullocks walked down an inclined ramp as they pulled up the waterbag, and when the bag reached ground level the water was tipped into a channel – and by a series of channels it was spread over the land. [DP]

[Page 7, line 2] Aravalis 400-mile range of hills rising to about 2,500 feet This was the location of Mowgli’s jungle, in early drafts of the Jungle Book, until it was moved to the Seoni Hills in Madyah Pradesh before publication. See note by John Slater.

[Page 7, line 26] dawk-bungaloathsome dawk or dãk bungalows were and are rest-houses for the accommodation of travellers, formerly maintained by the paternal care of the Government of India. The accommodation was humble enough, but comprised the things essential for the weary traveller—shelter, a bed and table, a bathroom and a servant furnishing food at a very moderate cost. [Hobson-Jobson]