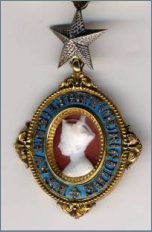 [Page 195, line 14] hope of a Star all administrators, and others too, were delighted to have their services recognised by being granted a ‘decoration’ in the form of membership of an Order. All the Orders carry a jewelled “Star” to be worn. The senior of the Orders awarded to people in India under British rule was called the Order of the Star of India.

[Page 195, line 28] across the Border here this means ‘out of British India into one of the Native States’. (Not ‘The Border’ as understood on the North-West Frontier of India in those days).

[Page 196, line 29] a shoe leather is unclean to Hindus and contact with it is liable to cause loss of caste. This suggestion therefore means adding insult to injury.

[Page 199, line 21] ‘This ‘ere Burma fever…’ malaria was endemic in many areas, and the cerebral malaria of Burma had a particularly high and swift death rate. See Gullian Sheehan’s article on “Kipling and Medicine”.

[Page 199, line 24] Thomas nickname for a private in the British Army, from ‘Thomas Atkins’. (see Kipling’s Prelude to Barrack Room Ballads, “To Thomas Atkins”, and “Tommy”.)

[Page 200, line 8] march down to Calcutta Several months on the road.

Good friends were dancing girl and priest
To one I knew, such friends—at least—
As those may be whom Fortune gives
Stars wide apart and differing lives:
And Gunga to the Saheb would sing
Sweet Indian songs for pleasuring;
[DP]