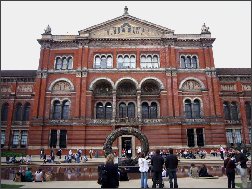 [Page 33, lines 3 & 5] South Kensington refers to the South Kensington Museum (right), founded in 1852. It was later renamed the Victoria and Albert Museum or V&A for short, and it was here that J. Lockwood Kipling had worked before moving to India. [DP]

[Page 35, line 9] Marwar the old name of the Rajput State of Jodhpur, which lies between the Indian Thar desert and the Aravali Range of hills.

[Page 35, line 10] jezails hand-made muskets with a very long barrel, although some are rifled. They are mentioned in several of Kipling’s poems – “What Happened”, “Arithmetic on the Frontier”, “The Last Suttee”, “The Lament of the Border Cattle Thief” as well as in the story, “The Man who would be King”. [DP]

[Page 35, line 10] Tonk there is a Rajput State of this name lying east of Mewar, south of Ajmir and north of Boondi. [DP]

[Page 35, line 19] Ruskin John Ruskin (1819-1900), whose writings about the Arts and Society were very influential in the late 19th century. There are several references to Ruskin in Stalky & Co., and in his autobiography, Something of Myself, Kipling attributes the interest to ‘Turkey’ (George Beresford) as:

Turkey never told us much about his belongings. He turned up, usually a day or two late, by the Irish packet, aloof, inscrutable, and contradictious. On him lay the burden of decorating our study, for he served a strange God called Ruskin. [DP]

[Page 35, line 23] Geisler’s cap or “Gessler’s cap”. It refers to the cap placed on a pole by Gessler, the Austrian Governor of Switzerland to which William Tell refused to bow. (My thanks to Gilbert Haefs, Fred Lerner, and John Wusteman for solving this puzzle: Ed.)

An interesting cross-reference is that in Letters of Marque Chapter II, page 15, line 20, Kipling refers to Tartarin of Tarascon from the book of the same name by Alphonse Daudet. There is a reference in this to ‘la toque de Gessler’. [DP]

[Page 36, line 3] Dr. Hendley was curator of the Jeypore Museum. Surgeon-Major Thomas Holbein Hendley (1847-1917) published several books including at least two on the Jeypore Exhibition of 1883, one on Asian Carpets, and one in conjunction with Lt-Col S.S. Jacob on Jeypore Enamels (see IV, page 29, line 25).

[Page 37, line 1] chaupur is a game played by two players with 8 men each on a board or cloth in the shape of a cross, 4 men to each cross covered with squares. The moves of the men are decided by the throws of a long form of dice. The object of the game is to see which of the players can move all his men into the black centre square of the cross first.

[Page 37, line 2] Pandavs the five sons of Pandu, victors in the battle of the Kurukshetra described in the Mahabharata; subsequently they settled in the district of Hastinapura near where the river Ganges emerges from the hills.

Draupadi was the daughter of Panchatica to whom all five Pandavs were married and with whom they retired according to legend to Mount Meru, accompanied by a great dog.

[Page 37, line 6] quail-fighting is basically the same as cock-fighting but using quail, which are small birds of the pheasant family. [DP]

[Page 37, line 14] saffron a golden-yellow spice and colorant derived from the stigmas of the saffron crocus (Crocus Sativus). [DP]

[Page 39, lines 4-5] the overture of the Bronze Horse a well-known piece arranged for brass bands by David Francois Esprit Auber (1782-1871), the French composer; Director of the Paris Conservatoire from 1842. This was one of his 50 operas. “The Bronze Horse” (to which the above was the overture) was a “Musical Spectacle” by Howard Paul, founded on Le Cheval de Bronze by Scribe and Auber. It was first performed in this version in London on 4th July; 1881. The first English adaptation was a “Fairy Opera” made by Cooke with Auber’s music in 1836.

[Page 39, line 11] Omar Khayyam Persian poet (c. 1050-1123), Khayyam meaning ‘tentmaker’, his father’s trade. He was primarily a mathematician but his name is mainly known as the author of the poem in quatrains, the Rubaiyat, which was rendered into English by Edward Fitzgerald in 1859. Omar lived in Nishapur in Persia.

[Page 39, line 19] Yantr Samrat, or Prince of Dials, is the triangular sundial erected by Maharajah Jey Singh II in Jeypore as part of the astronomical observatory Jantar Mantar built between 1728 and 1734. The sundial is marked with hours and minutes, the arc on the left showing the time from sunrise to midday, whilst that on the right will show the time from midday to sunset. [DP]

[Page 39, line 22] gnomon is the part of a sundial that casts the shadow. Gnomon is an ancient Greek word meaning ‘indicator’, ‘one who discerns’, or ‘that which reveals’. [DP]

[Page 40, lines 2 & 3] Indur and Har there is a reference to the ‘great god Har’ in The Naulahka as well as three to Indur, in all cases using them in invocations. “Har” or “Hari” is thought to be synonymous with the god Vishnu, but no references to Indur in the Hindu pantheon have been found. [DP]

[Page 40, line 6] Sanskrit the ancient and sacred language of India. The Hindu literature, from the Vedas downwards is composed in this language.

[Page 40, line 32] lâches negligence in the performance of a legal duty.

[Page 41, line 5] Master Coryatt presumably Thomas Coryate (1577-1617), English traveller and writer. He became jester at the court of King James I. Published “Crudities”. From 1612 he toured in Greece, the Holy Land, amd Persia, reaching India in 1616. He died in Surat.

[Page 41, line 6] Sir Thomas Roe (1581-1644) an ambassador to Mughal India 1615-1619, who visited the Emperor Jahangir at Ajmir. [Oxford Dictionary of National Biography]
Adsmir an early way of spelling Ajmir which is also known asAjmere. It lies about 100 miles by rail to the west south west of Jeypore.

[Page 41, line 9] Gulta a thirty minute walk from the eastern edge of Jeypore leads over a small pass to the “Monkey Temple” or Gulta Ji Mandir.

[Page 41, line 10] Motee Dungri A small palace, this is a replica of a Scottish castle, and perches on a hilltop. It was once occupied by Maharaja Madho Singh’s son, who was confined here. [DP]