[Page 144, line 4] “this sanguinary down-mail a-stickin’ in the eye of the Khundwa down!” “This bloody down-mail train holding up the down slow train to Khandwa!”.

Evidently our author (“the Englishman”) on his way from Jodhpur to Nasirabad had reached Ajmir Junction and had only 15 or 16 miles to go, but was kept sitting waiting in the train at the station, for the mail train from Delhi and the north to arrive. It would be sure to have passengers for the other line.

Both trains were bound for Bombay and both were rightly described as “down” trains. The mail train ran from Delhi via Jeypore, Ajmir, Marwar, Baroda and Broach. The other one went via Nasirabad, Chitor, Neemuch (Nimuch or Nimmaach), Rutlam to Khundwa (Khandwa) and on quite slowly, this one, to Bombay via Nasik. Nearly all the places named have alternative spellings, sometimes three or four. 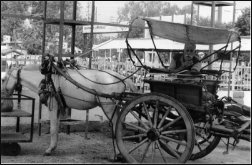 [Page 145, line 17] Deoli a town about 56 miles S.E. of Nasirabad and about 28 miles N.W. of Boondi. Nasirabad is about 16 miles S.E. of Ajmir Junction, which means it is 100 miles from Boondi to Ajmir, but in those days there was no railway to Deoli or Boondi.

There is one of nature’s spiritual ditties, that has not yet been set to words or human music: ‘The Invitation to the Road’; an air continually sounding in the ears of gipsies, and to whose inspiration our nomadic fathers journeyed all their days. The hour, the season, and the scene, all were in delicate accordance. The air was full of birds of passage, steering westward and northward over Grunewald, an army of specks to the up-looking eye. And below, the great practicable road was
bound for the same quarter.

[Page 147, line 25] Now the Englishman knew Gangra slightly, having seen it on the way to Udaipur but he hadn’t been nearer to the place than Chitor, which is 80 miles north of Gangra.

[Page 148, line 12] station this does not mean a railway-station – just a place where it was possible for a ‘Resident’, or troops, to be stationed.

[Page 148, lines 24 and 25] the waste into which the scapegoat was sent a reference to Leviticus 16, 8-10, where Aaron was instructed to release a scapegoat to atone for the sins of Israel. [DP]

[Page 148, line 28] Simla the celebrated hill-station in the foothills of the western Himalayas, headquarters of the Indian Government in the hot season, and the location for many of Kipling’s Plain Tales from the Hills. It is about 500 miles north of Boondi.

[Page 149, line 9] Lieutenant McRannamack the officer’s name is a fictitious one, as is the name of the Regiment. Kipling used the pseudonym of the Tyneside Tailtwisters (with variants) in several of his stories – it was one of the regiments stationed at Mian Mir at Lahore from 1882 to 1887; either the East Lancashirs Regiment or the Northumberland Fusiliers, almost certainly the latter. [DP]

A silver current, like the Tagus, roll’d
O’er golden sands, but sands of purer gold,
With dewy airs Favonius fann’d the flow’rs,

[Page 152, line 2] Nirvana In Buddhist theology, the attainment of nirvana breaks the otherwise endless rebirth cycle of reincarnation. Buddhists also consider nirvana as freedom from all worldly concerns such as greed, hate, and ignorance. [DP]

[Page 154, line 11] trunk Ganesh is the god with an elephant’s head. This passage describes an image of the god whose silver coating has been worn away by frequent touching by worshippers. [DP]