[Page 65, line 3 and two following paragraphs] sati (or suttee) the custom which demanded that all good wives should die on the funeral pyre with the dead body of their master. Here it is implied that it was the unveiling that condemned the woman to the burning, but in most cases they volunteered to die. See also the poem, “The Last Suttee”, first published January 1890 and collected in Barrack-Room Ballads and Other Verses. {DP}

[Page 66, line 7] Political another name for the Resident with the British Crown (Raj) at his back, who was always a political adviser to the (Independent) Native Prince or Rajah. (See Chapter VII, page 62, the first 15 lines or so.).

[Page 68, line 15] C.I.E. a Companion of the Most Eminent Order of the Indian Empire, founded by Queen Victoria – the Queen Empress of India in 1878.

[Page 68, line 33] from Jumrood to Quetta the records of North West Frontier expeditions have shown some 35 tribal peoples distributed over this area. The two places are about 300 miles apart as the crow flies and there was at the time no easy way to get from one place to the other. Jumrood is not far from Peshawar and is at the foot of the Khyber Pass. Quetta is in Baluchistan. The two places are roughly at the ends of the North West Frontier of India as it then was – now both are in Pakistan.

[Page 69, line 6] Rawats Chiefs of the Meenas who formerly occupied and ruled major parts of Rajputana.

[Page 69, line 27] Pathan from the Punjab (See Chapter VII, Page 63, line 4).
He “comes down with his pickings” presumably he started from his home on the Border, passing through the Punjab picking up likely horses for sale in Udaipur.

[Page 70, line 15] Urdu as the Sahibs speak it Urdu is an elegant classical language. This refers to ‘Hindustani’, the crude version of Urdu used by the British in camp or cantonment. 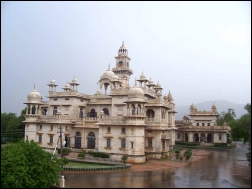 [Page 71, line 18] Mayo College at Ajmir (right) for the education of the Princes and sons of Chiefs.

[Page 71, line 29] Rajkumar Colleges Colleges for the sons of Chiefs, like the Mayo Colleges.

[Page 72, line 2] Sikh Sirdars Sikhs have their own specific religious beliefs, neither Hindu nor Muslim. They are traditionally a warrior people, whose principal holy place is the Golden Temple in Amritsar in the Punjab, close to Lahore. A Sirdar is a leader, commander or officer. {DP}

[Page 72, line 8] caracoling circling and wheeling – in horsemanship a half-turn to left and right alternatively, so as to make a zig-zag course. 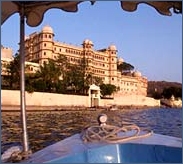 [Page 72, line 23] Durbar Gardens are thought to be the Sajjan Niwas, or Gulan Bagh Gardens in which the Victoria Hall was built in 1890, and are just to the south of Lake Palace Road in Udaipur. (See also Chapter VII, page 53, line 27). {DP}

[Page 72, line 30] Guzerat lions Panthera leo goojratensis – the Indian Lion, named by Smee in 1833. Guzerat – or Gujerat – is the fertile coastal strip straddling the Tropic of Cancer between Daman and the Sind boundary along the west coast of India. Akbar conquered it in 1573. It is between Rajputana and Bombay.

[Page 72, line 31] the King of Oudh’s sale Flora Annie Steel’s book On the Face of the Waters, opens on the first page with a description of the auction of the menagerie of the deposed King of Oudh (one of the old ‘United Provinces’) which took place after the Mutiny of 1857.