Kipling had offered a book of verses with twelve ‘soldier songs’, to Thacker, Spink & Co. before he left India in 1889, an offer that they refused. This poem is highly likely to have been one of those original ballads written before he returned to England.

Daniel Hadas notes that there is a rendition by Peter Bellamy on youtube. ‘this one works much better sung than read.’ [D.H.]

It is necessary to deal first with the subject matter of the verses, plundering or looting, since it was that which determined Kipling’s selection of both form and content and subsequently dominated, almost to the exclusion of all else, public perception of the poem and critical reaction to it.

Before the 19th Century, in ages when armies lived off the land through which they moved and fought, enforced contributions in kind from the civil population and official or unofficial plundering were accepted as inevitable side-effects of warfare, regardless of whether an army was in its own, an allied or an enemy country.

Plundering was such a recognised act of war that when the combined British and Dutch forces under Marlborough captured the Bavarian fortified position of the Schellenberg, near Donauwörth, in 1704, the Dutch struck a medal celebrating: “The enemy defeated and put to flight and their camp plundered”.

Later, when the Elector of Bavaria took refuge in Augsburg after the battle of Blenheim, Marlborough and his confederate generals put pressure on him to break with his French allies by ravaging the surrounding country so that:

From many points on the horizon rose pillars of smoke. By every pathway open [to Augsburg] his terrified subjects implored from their prince either protection or peace.
[Winston Churchill, Marlborough, his Life and Times, Harrap, London, 1933]. 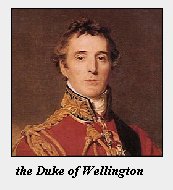 However, a little over a century later, when Wellington was fighting the French on the territory of Britain’s allies Portugal and Spain, plundering by Allied troops after the battle of Vittoria, 1813, so enraged him that he wrote in a despatch to Earl Bathurst:

It is quite impossible for me or any other man to command a British army under the existing system. We have in the service the scum of the earth as common soldiers ….

And one of Wellinton’s Generals, Maj.Gen Frederick Philipse Robinson, who served in the Peninsular War 1812-1814, wrote in 1813: 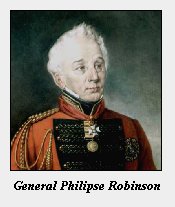 … wherever we move devastation marks our steps; the Portuguese are an army of thieves, the Spaniards have no feeling for their countrymen and our soldiers would be worse than either were it not for the severe discipline.

This severe discipline was the strict punishment of what was becoming known as ‘looting’, from the Hindustani word lut, to rob, since it was in India that it flourished in the first half of the 19th Century.

Corporal Forbes-Mitchell, of the 93rd Highlanders, records in his Reminiscences of the Great Mutiny, (published 1893) that in and around the Imambara, the Kaisarbagh and adjacent streets after the final relief of Lucknow in 1858:

The Sikhs and Gurkhas were by far the most proficient plunderers, because they instinctively knew where to look for the most valuable loot. The European soldiers did not understand the business, and articles that might have proved a fortune to many were readily parted with for a few rupees for cash or a bottle of grog.

It must be remembered that, despite Wellington’s efforts, looting in the aftermath of a battle had had a long tradition and that ‘official looting’ of enemy treasure or valuable equipment, for which a British soldier or sailor could receive prize money, was only forbidden in the 1860s. It seems unlikely that Kipling had access to Forbes-Mitchell’s reminiscences three years before they were published, but he appears to have met at least one soldier who had gained the experience that his comrades had lacked in 1858.

By the time Kipling wrote “Loot” the British public was positively turned against the whole idea of it, as he acknowledged in the line ‘For the same with English morals does not suit’, although Victorian campaigns had provided, and continued to provide, many examples. Despite this, Kipling went ahead to include this unacceptable face of Victorian soldiering in his depiction of Tommy Atkins, but not without doing what he could with the form and style of the content to deflect criticism.

The opening line of the poem gives a clue to Kipling’s approach:

If you’ve ever stole a pheasant-egg be’ind the keeper’s back,

is in the same spirit as the lines:

As me and my companions was setting out a snare
‘Twas then we spied the gamekeeper, for him we didn’t care..

This is from the popular ballad, “The Lincolnshire Poacher”, (or Northamptonshire in some versions) a ‘celebrated comic song’ which had ‘extolled the joys of poaching for over one hundred years’ [Journal of the Folk-Song Society Vol.1, No.3, 1901].

Kipling starts ‘Loot’ by this direct link to a popular and well known song in an attempt to ensure that his poem was also seen as comic from the start , and hence not to be taken too seriously. The poem then continues in comic fashion with exaggerated, sometimes grotesque, use of dialect, absurd chorus lines, inserted stage directions and musical notations indicating ‘loud’ and ‘as loud as possible’. This technique, intended to disarm serious criticism, has been analysed by Christie Davies in ‘Kipling’s Comic and Serious Verse’, (KJ308, December 2003, pp 34-54) where he writes that when used by a writer or speaker, it is:

… in order to show that he or she has moved firmly out of the world of everyday common-sense discourse and into that of comic fantasy, a space where it is possible to play verbally with the forbidden, indeed even at times with the obscene, the blasphemous and the violent but only on condition that all hint of seriousness is excluded.

We can see Kipling using a bizarre, baroque, exaggerated form of synthetic cockney for just this purpose in the outrageous comic verses of his poem “Loot” which could not possibly be written in standard English because of the danger that someone might take it seriously. Kipling’s usual humorous technique of ironic comment and apparent endorsement where he casts doubt by appearing to agree is far too mild and ambiguous a method to work here. Nothing short of farce will do.

As a consequence of this technique, the poem lacks a formal structure. The five stanzas are basically each of two quatrains, as are the refrains or ‘choruses’ to the first and last verses, They are, however broken by inserted directions, ‘(Cornet)’ and ‘(Chorus)’, which have to be omitted in order to get the lines to scan, and similarly inserted musical notations (ff) and (fff) which cannot be verbalised, although to apply them and increase the volume when reading aloud would be entirely in accord with Kipling’s intentions when writing them.

This ballad is one of the closest to a music-hall song, with a flowing rhythm helped along by internal rhymes; interjections from a cornet; and a chanted chorus that plays mind­ lessly on the poem’s title. As has often been said it is a glorification of looting, but it is less often remarked that it is also a defiant justification of looting. The singing shouting looter who enjoys treating “a nigger to a dose o’ cleanin’-rod” and offers the advice that while looting isn’t exactly encouraged, “You can mostly square a Sergint an’ a Quartermaster too”, is completely out of control. He was a familiar military figure of the  1880s, and well beyond, and one that Kipling felt could only be swept away by a well-paid decently-treated army.

The association between lower-class misbehaviour at home (poaching and petty thievery) and in the army, would have been familiar to the poem’s original readers; the poem not only confirms, but celebrates, the fact that the army recruited from the dregs of society, and cocks a snook at the disapproval of respectable folk (rather than, as in ‘”Tommy”, attempting to explain and palliate).

The mark of this is in the form of the poem, which is addressed to a circle of like-minded associates, rather than to an outside audience. As Carrington remarks (Complete Barrack-Room Ballads pp. 160-61) the image of the private soldier here as lawless and brutal (and jolly with it) has hardly changed since Henry V. Yet the justification offered by the speaker (that the danger and hardship of soldiering justify ‘pay[ing] yourself for fightin’ overtime) seems in the end less important to Kipling than the music of the human hounds.