Ralph Durand provides an excellent introduction, which applies to the circumstances of maritime trade when Kipling wrote the poem:

A ‘liner’ is a passenger boat that plies regularly between certain ports. The cargo steamer, in sea slang called a ‘tramp’, on the other hand, never knows where her next voyage will take her. She may go to West Africa for a cargo of oil or rubber in January, and in June be dodging ice in the White Sea on her way to Archangel for timber, and a month or so later may be loading cotton in New Orleans or lying in Rangoon on the chance of getting a load of rice.

Very often she is out of touch with her owners, and her captain solicits custom from port to port. The earnings of a cargo steamer plying an uncertain trade therefore bear comparison with those of unfortunate women who hang about Portsmouth Hard by the Royal Dockyard waiting for sailors who have been paid off or granted liberty ashore. 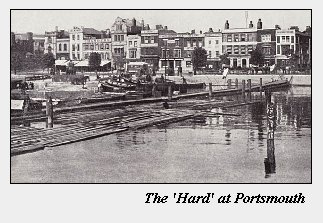 The speaker of the lines is one of the “unfortunate women”, cited above. The Hard, or ‘Common Hard’, is still there on Portsmouth waterfront, but its nature has greatly changed. As its name implies it was a hard landing, available to all, where boats could be pulled out of the water to be repaired and painted – much of the rest of the harbour, outside the Royal Dockyard, was mud, and small boy ‘mudlarks’ would grovel for pennies in the mud.

The roadway behind the Hard was lined with public houses which did a roaring trade with the sailors and their women, and the continuation of the Hard, Queen Street, which led to the city centre, the Guildhall and Commercial Road, was similarly full of pubs and small traders. The whole area was devastated by bombs in February 1941, and very little remains of the area which Kipling would recognise. He had often walked along there with Captain Holloway when he was living in the ‘House of Desolation’ in nearby Southsea, between the ages of 5 and 11.

Nowadays, the area is a transport hub, being the destination for long-distance coaches, and local buses, with the railway from London, Brighton and Southampton terminating alongside the bus station, and the ferries across to the other side of the harbour leaving from an adjacent pontoon. And the area of the Royal Dockyard close by is now the ‘Historic Dockyard’ containing HMS Victory, the Mary Rose and the Warrior.

On the other side of the railway, the Gunwharf has become a large shopping mall, with ‘water features’ and a ‘piazza’, and restaurants and gastro-pubs selling every kind of cuisine you can think of. Possibly the modern descendants of the “unfortunate women” may still be found there, but certainly their sailor friends have more money in their pockets than they would have had 120 years ago.

Daniel Hadas points out that this poem joins ‘Cruisers’ in personifying a type of ship – the ‘little cargo boats’ –  as ladies of easy virtue.

a-plyin’ up an’ down to ply a trade is to follow a trade.

‘angin’ round the Yard the Dockyard – commonly called ‘The Yard’ – was a closed area, and had been for centuries, not so much to prevent unauthorised persons entering the Yard, as to prevent the Admiralty stores from leaving it, as in ‘King Henry VII and the Shipwrights’ (Rewards and Fairies).

All the way by Fratton tram down to Portsmouth ‘Ard. When the poem was written the Portsmouth tramways were still horse-powered. They became electric trams in 1901, and these were replaced by electric trolley buses in 1929. The trolley buses have now gone the same way as the trams.

[Verse 2] One interpretation of this verse is very bitter.

by the paint upon her face in keeping with their public image, passenger liners were lavishly painted, (see “Bread upon the Waters”, The Day’s Work p. 293) and the painting of thr cargo vessel the Grotkau:

The liner’s superior ‘make-up’ doesn’t necessarily make a lady out of her.

and if she meets an accident in nautical terms the accident may well be a collision or a grounding, but the equivalent for the ladies, of whatever class, is probably another addition to the human race, and quite possibly disgrace.

they’ve got to load or die if the cargo-boats don’t take a cargo, then they will go out of business. If the “unfortunate women” don’t ply their trade, then they will become destitute.

‘er route is cut an’ dried as Durand explains, a liner, by definition, runs only between fixed ports, and runs to a schedule.

got to do their business first and make the most they can they cannot pick and choose, whether it be a cargo, following the nautical metaphor, or a man who is seeking their services.

and ‘e’d bid ‘er stay at home when war was declared in 1914, then initially many liner sailings were cancelled, and shipping schedules were upset for the rest of the war.

‘E’d ‘ave to up an’ fight for them the protection of maritime trade has always been one of the major duties, if not the major duty of the Royal Navy (see “Big Steamers”).

There still would be the cargo boats for ‘ome an’ foreign trade Great Britain lives by trade, and mariners were divided, as to their competence, by their certificates from the Board of Trade, for Home trade, or Foreign trade.

The maritime imagery that Kipling uses in this verse has changed out of all recognition. Modern ‘liners’, running between fixed ports, to a schedule, are container ships: virtually the only passenger-carrying ships are cruise-liners. The tramp, or the “dirty British coaster with a salt-caked smoke stack” (to quote John Masefield) has totally disappeared.