Published in London in the Morning Post, 26th March, 1908, in Canada in Vancouver World on 28th March, 1908, and in the USA in Collier’s Weekly, 28th March, 1908, as “Testing the Eldest Sister’s Strength”. Collected in Letters of Travel (1892-1913), in 1920. This article describes the cities and scenes on a journey across Canada east to west as far as the head of Lake Superior.

[Page 138, line 3] Private car; a railway carriage for one’s personal use. In the UK there iare, and have been since 1844, personal railway carriages, or whole trains, for the Monarch: and some of the larger railways had a saloon for the use of the directors. But in the United States and Canada, where the distances were so much greater, the great railway magnates, of whom Van Horne (see below) was one, had their own “private cars” – luxury parlour car, dining saloon and sleeping carriage, all rolled into one.

In Captains Courageous, Harvey Cheyne, the millionaire railway king, makes a classic journey from San Diego to Gloucester Massachussetts on the news that his lost son was alive and well, in his private car, “The Constance”. See our notes by John Reading on the story. 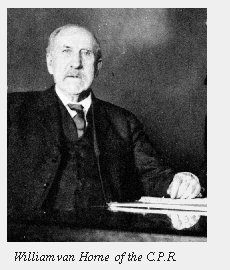 [Page 138, line 5] donor The American-born William Van Horne (1843-1915). He had learned his railroading in the United States and in 1882 became the General Manager of the CPR, for the building of which he was largely responsible. He subsequently became its Vice-President and later President (1888-1899).

At the time of Kipling’s visit he was the Chairman of the Board of the CPR, so what he said went. He became a naturalised Canadian a year before his death.

[Page 138, line 12] mango tree after the trick the disappearing mango tree (quite small size for a tree) was, and probably still is, one of the favourite conjuring tricks in India.

[Page 139, line 25] I’m Winnipeg I’m from Winnipeg, the capital city of Manitoba, the first of the three Prairy Provinces as one travels westwards. (The other two are Saskatchewan and Alberta).

[Page 141, line 1] John Kino that universal researcher’s aid, Google, throws up no answer. This Editor wonders whether John Kino was another form of ‘John Bull’, or ‘Uncle Sam’.

[Page 141, line 3] Treaty Ports there were a number of ports along the seaboard of China which were the subject of various treaties between China and individual European nations, by which the European nation enjoyed various trading concessions and exemptions from taxes. These treaties had rarely been negotiated as between equals, but were often imposed by the Europeans. The British Treaty Ports included Hong Kong, Shanghai, Canton, Ningpo, Fuchow, and Amoy. 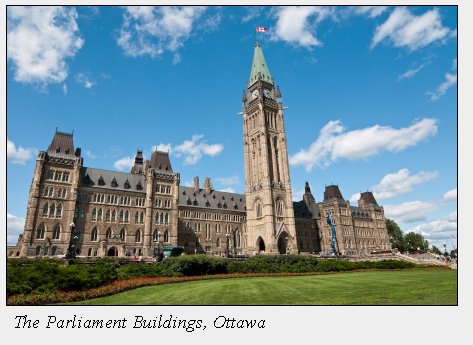 It has a stunning waterfront on the river Neva, and Kipling is comparing Ottawa’s frontage on the Ottawa river to that of St. Petersburg. 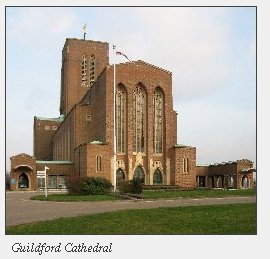 [Page 142, line 1] cathedrals even in England there was cathedral building after the Great War. The foundation stone of Guildford Cathedral in Surrey was laid in 1936, the first English cathedral to be built since the Reformation in the sixteenth Century, apart from Truro (1876) and Liverpool (1904). The Church of England, unlike Churches in the Empire overseas, was, of course, well endowed with splendid medieval cathedrals.

[Page 142, line 8] Medieval mistrust of Greek Graecum est? Non legitur— “Is it Greek? Then, it musn’t or shouldn’t be read”—was a Latin adage of the late Middle Ages.

Latin, the language of the Catholic Church, the expression of its intellectual authority, and of the approved versions of the scriptures, was the lingua franca of Europe, and central to a University education. Greek was associated with Byzantium, i.e. an ‘enemy’, and with the ancient world of the philosophers, tainted by free thinking and scepticism. Moreover, awareness of Greek philosophy in the West, mostly from Aristotle, came largely through the Muslim world, which the Church took for an arch-enemy.

For Kipling’s awareness of the instinctive authority of the medieval Church, see “The Eye of Allah” in Debits and Credits.

[Page 142, line 13] Virgil The great classical Roman poet (70-19 BC) who wrote the Aeneid, the Eclogues and the Georgics. Kipling was well familiar with his works. See his poem “The Bees and the Flies” which follows “The Mother Hive” in Actions and Reactions.

[Page 142, line 23] more than usual picturesque 1907 was the year of the ‘Bankers’ Panic’, when the New York Stock Exchange fell nearly 50% from its previous year’s peak, and a number of State and local banks became bankrupt. One result was the creation of the Federal Reserve

[Page 143, lines 3-4] given up painting their lodges with vermilion Some native Americans used to decorate their dwellings (variously ‘lodges’, ‘wigwams’, ‘tepees’, ‘wickiups’, ‘pueblos’, etc.) with vermilion paint. Kipling is stressing that Canada is no longer a primitive country.

[Page 143, line 11] Sheldonian the famous theatre in Oxford where much of the printing work of the University was conducted until 1713. Built by Gilbert Sheldon (1598-1677), Warden of All Souls 1626-1648; Archbishop of Canterbury from 1663. As Chancellor of Oxford University he built the Sheldonian at his own expense in 1669, and endowed it. 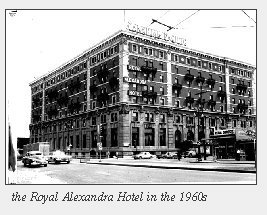 [Page 143, line 21] Chinese in the election cartoons In the 1906 General Election the Liberals in England had made an election issue of the treatment of the indentured Chinese labourers brought into South Africa by Lord Milner to get the mines going again after the Second South African War (1899-1902). Kipling was friendly with Milner and greatly admired him.

[Page 144, line 6] her three cities These were presumably: Montreal, Toronto and Ottawa. Many other great Canadian cities have grown tro prominence in the hundred years since Kipling was writing, including Winnipeg, Halifax, Hamilton, Quebec, Edmonton, Calgary and Vancouver.

[Page 144, line 13] ‘hustle’ the tendency to attack tasks in an urgent, showy, aggressive style, brushing opposition aside, perhaps more highly valued in America than in Britain at that time. Kipling was well familiar with hustle, having lived in the United States for four years in the 1890s. He was not greatly impressed by it. (See p. 253 line 18 in Egypt of the Magicians.)

[Page 145, line 2] Land of Little Lakes from Lake Simcoe (on which is Orillia, scene of Stephen Leacock’s Sunshine Sketches. and include the Muskoka Lakes.

[Stephen Leacock (1869-1944) was a Canadian humorist – among other things – who was very popular, particularly in the years immediately before World War I. This Editor remembers finding, and enjoying, several of his books in the library of the Royal Naval College at Dartmouth in the 1950s; it is sadly to be doubted that any would be found today, other than in a library’s reserve collection.]

[Page 145, line 14] when the ice is thick enough to cut a canoe At the onset of winter inn that area, where paved roads were then non-existent and even logging trails few and far between, all transport was by water in canoes or bateaux. The birch bark canoe was relatively fragile, and early ice could cut the bark skin, and sink the canoe. So when the ice came, that was the time to leave your “summer playground”. 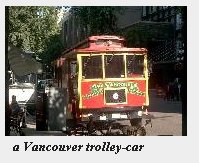 [Page 145, line 22] trolley-car An electrically driven vehicle providing cheap urban transport. The ‘trolley’ was the pole used to pick up electricity from the overhead wire.

[Page 146, line 1 ] talk …. was of mines this would start just south of Sudbury. Sudbury, Ontario, (copper and nickel) lies some 50 miles north of Georgian Bay, which is, one might say, a subsidiary lake of Lake Huron.

[Page 146, line 4] Klondike or Nome the first is in the Yukon territory of Canada and was the scene of the last of the great gold-rushes (1900); the second is in the West of Alaska, U.S.A. facing Siberia across the Bering Straits. It also had a gold rush at that time.

[Page 146, line 15] line of skirmishers … the day’s battle this is more accurate of manoeuvres than of actual battle but one must not forget that Kipling had seen troops go into action in South Africa as well as the annual manoeuvres in India.

[Page 146, line 22] gimleted looked at me with the pupils of his eyes drawn into tiny points.

[Page 147, line 2] half less than nothing a picturesque expression meaning “very little indeed”.

[Page 147, line 18] Eternal Mother-lode the legendary vein of ore begetting all others or at least putting them into the background.

[Page 148, line 9] two towns as we are in Canada these must be Fort William and Port Arthur, right at the western extremity of Lake Superior. (See the note to lines17/18 below.)

[Page 148, line 13] they hate each other this rivalry between Canadian towns reaches a pitch unknown even in Scotland, or at least still did in the 1960s when the ORG was publshed

[Page 149, line 4] a snake-charmer to a lion tamer both deal with wild animals but need different kinds of judgment and skill.