The journey across America 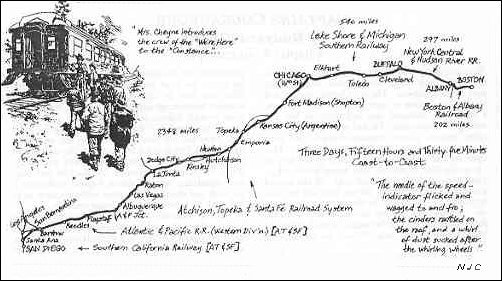 Harvey Cheyne’s fictional speed run (54 hours, 54 minutes from
San Diego to Chicago) was based on a well-publicised July 23-26, 1895 special from Colton, CA to Chicago for B.P.Cheny Jr., a director of the Atchison, Topeka & Santa Fe (ATSF), returning to his ailing son in Boston.

The Cheney special’s running time from Colton to Chicago was 57 hours, 46 minutes, though delays from washouts made its total time en route three days seven hours and two minutes.

[Page 214, line 5] Fix the connections Kipling told either R. H. Davis or A. B. Maurice, `I didn’t [work it out]. I let the railroads do the work for me. I simply wrote them explaining the situation and asked them how they would have arranged to convey the ‘Constance’ across the Continent in the fewest number of hours’ (R. H. Davis and A. B. Maurice, The Caliph of Bagdad (1931), 87).

The special train travels south from Los Angeles to collect the Cheynes in San Diego, then east to Santa Fe in New Mexico, to Chicago, and then to Buffalo on the eastern end of Lake Erie in New York State. From Albany in the east of New York State, the train goes on to Boston. The stages of the journey are made on the lines of the different railway companies.
It is probable that the Southern California RR would have moved the ‘Constance’ from Los Angeles to San Diego on a regular train and would then have made up the Cheyne special at its San Diego terminal. The special train then goes east to Chicago, and on to Buffalo. The Atchison, Topeka & Santa Fe main line does not go through the city of Santa Fe, which is at the end of a 20 mile branch from Lamy, New Mexico. [J.W.R.]

[Page 214, line 12] Morse the Morse key, equipment for sending messages in Morse code, a means of communicating expressed in dots and dashes. Samuel Morse (1791-1872) demonstrated his invention in 1844.

[Page 215, line 11] Sixteenth Street This was the crossing point for the Santa Fe route into Dearborn Station with the Lake Shore and Michigan Southern line to its station on Van Buren Street. [J.W.R.]

[Page 215, line 16] Tuesday P.M. Kipling lost track of time here; Cheyne’s departure from Buffalo on the NYC&HR would have been early Wednesday morning, if the ‘Constance’ were to leave Chicago on ‘Tuesday p.m.’ and then leave Albany for Boston at ‘three-five p.m.’ Wednesday. [J.W.R.]

[Page 215, line 28] ‘ ‘Tisn’t bad ‘, said Milsom modestly. Milsom perhaps gives himself too much credit. Based on maps in the June 1893 Official Guide, he had but two alternative routes to Chicago, both longer and more complex, with multiple connections.

The ‘Constance’ could move north via the SP, from Los Angeles over Tehachapi Pass to Sacramento, then then east to Ogden, then Union Pacific to Omaha, then Chicago and North-Western to Chicago.
The other route would use the Southern Pacific Railroad (SP) to El Paso, then Texas and Pacific to Fort Worth, with various connections possible beyond Fort Worth. The famous Atchison Topeka and Santa Fe (AT&SF) advertising slogan, ‘Santa Fe all the way’, made the most sense for Milsom. [J.W.R.]

[Page 216, line 25] ‘Don’t shoot, Colonel. We’ll come down.’ ‘Davy Crockett’ (1786-1836) the American pioneer and politician, was famous among frontiersmen as an unfailing shot. One story about him, which found its way to the halls of Congress, was that he had ‘treed’ a coon one day, and was about to take aim, when the coon called out ‘Don’t shoot, Colonel, I’ll come down, I’m a gone coon’. In ‘Captains Courageous’ Topeka is surrendering to whatever Cheyne may have in mind. [J.W.R., with data from Factopedia on the World Wide Web]

[Page 217, line 24] Barstow In 1896, the Southern California RR met the Southern Pacific and the Atlantic and Pacific at Barstow. [J.W.R.]

[Page 217, line 27] Atlantic and Pacific Another AT&SF subsidiary, jointly owned with the St Louis-San Francisco, built west from Albuquerque to Needles, California, reaching there in 1883. [J.W.R.]

[Page 222, lines 6-8] the Continental Divide the watershed of the United States. The ‘crash of the couplings and the wheeze of the brake-hose’ are the sounds of stopping a train at the summit of a mountain pass to test its brakes before the descent – exactly what would have happened during Kipling’s 1889 journey on the Denver and Rio Grande over Colorado’s Marshall Pass, or his 1892 visit to the Canadian Pacific‘s Kicking Horse Pass, with its 1 in 25 descending grade through the Rockies. [J.W.R.]

[Page 223, line 6] the clink-clink of hammers See Philip Holberton’s note on “The Sons of Martha”, Verse 2.

[Page 223, line 7] Krupp-steel wheels Alfred (1812-87) and Friedrich Krupp (1854-1902) were manufacturers of steel in Essen, North Germany. Kipling seems to have been using an impressive sounding phrase with little basis in fact. By the 1890s American steel from Pittsburgh was as good as any in the world.

[Page 223, line 26] Nickerson Kansas. An engine change at Nickerson meant that Cheyne’s fictional special was using the original, 14-mile longer, AT&SF line through Great Bend Kansas, rather than the more direct route from Kinsley to Hutchinson opened in 1887.[J.W.R.]

[Page 226, line 19] calling down the old man criticizing his father.

[Page 237, line 10] side-boys mark of respect, boy seamen on watch providing a guard of honour along the gangway, as in the US Navy and the Royal Navy.

[Page 246, line 10] Unitarian a Christian who denies the existence of the Trinity, and asserts the oneness of God.