This article describes some of the progressive and rising towns of Canada. It was originally accompanied by the poem (without title) beginning: “I see the grass shake in the sun for leagues…”; it is collected as “The Prairie” (ORG Verse No. 916) in Songs from Books (1913), and in the subsequent major collections of the verse.

[Page 172, line 2] High Veldt (or Veld) the high treeless plains of Southern Africa. To a Canadian the prairies are all that the Veldt is, and more. A South African would almost certainly disagree.

[Pages 172 and 173] Kipling had last visited Winnipeg in 1891/2, and finds himself astounded by the progress which had been made in the last 15 years.

[Page 174, line 11] one race prefers to inhabit there one must assume, in the light of what has been written before, that he is referring to the French-Canadians.

[Page 174, lines 13/14] red-brick schools almost as big (thank goodness) as some convents he is relieved that the Roman Catholic schools are not predominant. 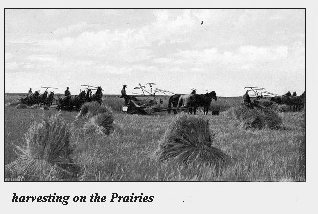 [Page 176, line 20] a stretch of wheat in stooks Modern combine harvesters cut the wheat and thresh out the grain in a single operation.

Before their introduction, the wheat was cut with a ‘reaper and binder’, and tied in sheaves, which were stacked into ‘stooks’, little piles of sheaves with their heads uppermnost to dry in the sun. They were then gathered in and threshed with a steam thresher. 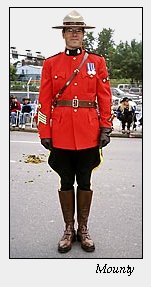 They are now the Royal Canadian Mounted Police (since 1920), and often referred to as the ‘Mounties’.

[Page 176, line 33] Grand Trunk the Grand Trunk Pacific Railway undertook a line north of the C.P.R. but when the Canadian Northern Railway entered the field, development failed to keep pace. The government had to nationalise the G.T.P. and C.N.R. and run them at a loss to prevent the country’s financial system collapsing.

[Page 177, line 15] palimpsest a parchment prepared for writing on and erasing for re-use; the original writing can often be discerned. A number of ancient texts have been recovered by this means.

[Page 177, line 25] clean bright straw for fuel no doubt it seemed a waste to one accustomed to English farming, but what else could they do with hundreds of tons of surplus straw ?

[Page 178, line 6] Thomas Tusser (c.1524.-1580) agricultural writer and poet who farmed in Suffolk and introduced the culture of barley. author of Five Hundred Points of Good Husbandry. Kipling uses some verse by him as the heading for “An Habitation Enforced” in Actions and Reactions. See also “The Four Points in “The Muse Among the Motors”.

[Page 178, line 24] Farmyard muck, our dark mother of all things Kipling’s Commissioner of the Local Board of Trade was clearly thinking of manure as all good farmers think of it, the indispensable rejuvenator of tired soil.

[Page 179, lines 6-8] The races which work … at least as fast as ours Kipling is complaining that non-English immigrants are flooding in, to the ultimate detriment of Canada as a outpost of Britishness.

[Page 179, line 11] a town down the road this must have been Medicine Hat. See the note on p. 26, lines 4 to 26, in “From Tideway to Tideway” (in preparation). See also the article by Jay Johnson in KJ 273/46 on “Freight Car Kipling, Riding the Rails to Medicine Hat”, and the article by David Alan Richards on “RK’s Advice to the Hat”. 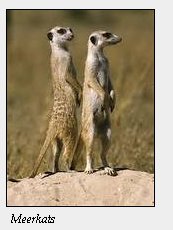 [Page 180, line 23] Gophers in different parts of the world various small animals are so named, but we think the one referred to here is the burrowing ground squirrel.

[Page 181, line 18] Charon in Greek mythology the ferryman of Hades who ferries the souls of the dead over the River Styx to the infernal regions. See “The Pleasure Cruise” (1933).

[Page 182, line 24] Nineveh The great capital city of the ancient Assyrians, built some four thousand years ago in what is now modern day Iraq.

[Page 182, line 32] squattered to make one’s way with much splashing. Kipling has used this word several times. See “Bread Upon the Waters” in The Day’s Work, page 300, line 13. about a freighter in a heavy sea:

… they squattered through the dripping gorse…