It describes people and scenes in the Western mountains and the Pacific coast of Canada. It was originally accompanied by the poem “When the Great Ark” (Verse No. 917 in ORG). It is collected in Songs from Books (1913), and in the subsequent major collections of the verse.

[Page 184, line 12] qualmish affected with a (sudden) feeling of sickness.

[Page 185, line 22] Little Brothers to the Himalayas Kipling had seen something of the Himalayas during his seven years in India, the greatest mountain range in the world.

[Page 185, lines 27 and 30] a mountain kneeled on a … village …The other half still stands The town of Frank was wiped out by a landslide in 1903. The Presbyterian Minister at the time was the uncle of Admiral Brock, who annotated these articles for the ORG.

[Page 185, line 31 ] ‘Heathen in his blindness’ Kipling is quoting from the hymn written by Bishop Reginald Heber (1783-1826), “From Greenland’s Icy Mountains”
(Hymns Ancient and Modern, No. 358) which, in a confident assertion of Victorian evangelism, includes the lines:

In vain with lavish kindness the gifts of God are strown;
The heathen in his blindness bows down to wood and stone.

Shall we, whose souls are lighted with wisdom from on high,
Shall we to those benighted the lamp of life deny?
Salvation! O salvation! The joyful sound proclaim,
Till earth’s remotest nation has learned Messiah’s Name.

[Page 186, line 1/2] a learned scholar of a little-known university probably ‘the University of Life.

[Page 186, line 28] talus a mass of rock and loose stone at the base of a cliff, which has fallen from the slope.

[Page 187, line 13] At Calgary it was frost, and the dahlias were dead The dahlia flower suffers instantly in a frost. Kipling had used this imagery (itself a quotation from Handley Cross by R.S. Surtees) in “The Last Term” in Stalky and Co. (p.231). 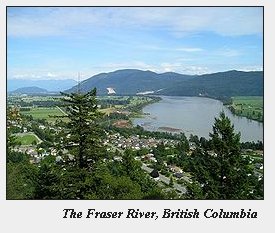 [Page 187, line 19] the Fraser this river first runs north-west, then to the south, in British Columbia and enters the sea at Vancouver.

[Page 188, line 16] riding straddle Kipling is writing for an English audience. In Britain in those days respectable ladies did not ride astride. 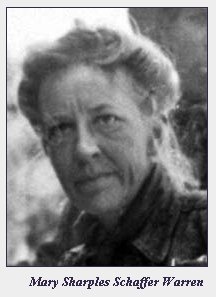 Mrs Schaffer was a botanical illustrator and photographer, originally from Philadelphia.

Her first husband was Dr Charles Schaffer who wrote Alpine Flora of the Canadian Rocky Mountains.

After he died Mrs Schaffer continued her explorations with Miss Adams as a companion. In 1908 the two of them, with a guide and a Mr K. Unwin (Warren) mapped Beaver Lake and Mrs Schaffer later married him.

I picked up the trail of this story when reading Partial Recall edited by Lucy R. Lippard, New York Press 1992. These are essays on photographs of Native North Americans. Quoted at the end of the Introduction, note 55, is a reference to Hunter of Peace: Mary T.S. Schaffer’s Old Indian Trails of the Canadian Rockies edited by E.J. Hart, p.2. Banff:: Whyte Museum, 1980, ISBN: 082060806X.

There is an account of Mrs Schaffer at the Peakfinder web-site. [D.P.] 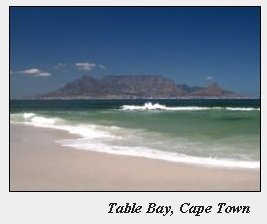 [Page 189, line 27] South Africa could, even now, be made a tourists place In 2010, with mass air travel, the pleasant climate, splendid game reserves, and magnificent beaches bring many tourists to South Africa.

[Page 192, line 17] Gurgaon about 50 miles south-west of Delhi. More liable than the other two to suffer from water shortage.

[Page 193, line 23] Black Death in England bubonic plague in the
mid-14th century, from which one third of the population died. As Kipling surmised it did indeed have a profound effect on social relationships, and on the rural economy, since manpower was in short supply. 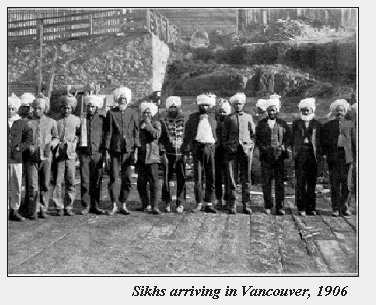 However, one of them evidently looked like a senior native officer of the Indian Army ‘with a British India medal’.

This may be taken to mean he was wearing the riband of a medal. If it was a riband it might have been that of the Order of British India, which was created in 1837 for native officers of the Indian Forces under the East India Company, but it could have represented one of many campaign medals.

He certainly would not have been wearing the medal of the Order of British India, which was worn (when it was worn) round the neck. The riband was worn in the ordinary way on the left breast when no medal was with it. All we are certain of is that the phrase “a British India medal” is not quite correct, which seems surprising in view of Kipling’s years in India.

[Page 194, line 1] Sons of the Khalsa The Sikhs are traditionally fine soldiers, and are to this day. The Khalsa was originally established as a military order of “saint-soldiers” in 1699, by Guru Gobind Singh, the tenth Sikh Guru.

[Page 194, line 2] tramped off in fours the British and Indian armies then drilled and marched in columns four deep.

[Pages 194/195] Such casual acceptance of whale-hunting, killing and exploitation could not be written today.