[Page 218, line 16] journals, long dead the Oxford and Cambridge Magazine of 1856, which contained much early work by William Morris (prose and verse), and contributions from Burne Jones, Rossetti, and Price himself. Also The Germ, a much earlier Pre-Raphaelite paper.

[Page 218, line 24] high and disposedly a reference to Sir James Melville’s description of Queen Elizabeth in his Memoirs.

[Page 221, lines 22-3] Ulpian serves your need; `Aha! Elucescebat, quoth our friend’ both from Browning’s “The Bishop orders his tomb at St Praxed’s church”.

[Page 226, line 1] Steady the Buffs This well known army saying is also used by Kipling in “Poor Dear Mamma” in “the Story of the Gadsbys”, and in Abaft the Funnel”. The Buffs were originally the 3rd Foot, and known in Kipling’s day as The Buffs (East Kent Regiment). The saying is often attributed to Kipling, but was probably already long extant in the British army.

[Page 228, line 23] formes the forme is a metal frame into which the type is locked after composition. Loose blocks of type are made into a single solid mass by hammering in wedges of wood, called quoins. Thus a forme can be moved about, stood on its side, etc.

[Page 229, line 24] ”Member what the considerate Bloomer did . . . Hounds?’ a Bloomer was a follower of Mrs Bloomer’s dress reforms of 1849, of which bloomers were a part. In R. S. Surtees’s Mr Sponge’s Sporting Tour, 1853, chapter XLII, a girl altered an account written by Spraggon about a hunt, making nonsense of it. Hence, ‘we must sugar Mr King’s milk for him’.

[Page 230, line 5] “One of those scientific rests … celebrated” … The Puffington Run. Another reference to Mr Sponge’s Sporting Tour.

[Page 230, line 17] Quis multa gracilis… What slender youth bedewed with liquid odours… From Horace’s Ode, I, 5, much translated and quoted.

[Page 231, line 15] `Let me from the bonded ware’ouse of my knowledge’ (and the quotations that follow) R. S. Surtees, Handley Cross, chapter XXXII. 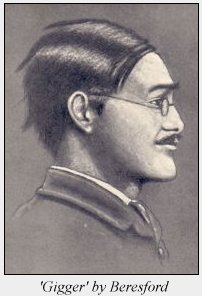 As Kipling was the only boy in the school wearing glasses, he required a nickname to emphasise the peculiarity…the laundry-cart man, who seeing our hero, asked: ‘Who’s they old gig-lamps?’ The name was immediately adopted with acclamation; but for everyday use use it was shortened to ‘Gigs’ or ‘Gigger’”.

Throughout his book Beresford refers to Kipling as “Gigger”. He admits that Kipling also had the nickname of “The Beetle”, but ‘this appellation was current only among a few’ (p. 21). [P.H.]

[Page 243, line 20] Dolabella & Co. Dolabella was an associate of Verres, whom Cicero was attacking in this speech.

[Page 244, line 19] frabjously taken from the “Jabberwocky” poem in Lewis Carroll’s Through the Looking Glass, and made into an adverb. See the note to page 77, line 12.