First published in The Civil and Miliotary Gazette, April 13th, 1886.

This is a meditative poem, markedly different in tone from those that have preceded it, though equally sceptical about the concerns of the ‘heaven-born’ officials who govern India. The day to day departmental issues, policy, legal judgements, personal rivalry, promotion, leave, transfers, are in the end as nothing when set against the death that all men face sooner or later. We are none of us free of the vice of favouritism – but what shall it avail us when we are appointed to The Last Department ? Death has no favourites. And the possibility of sudden death, from fever, cholera, a riding accident, a bullet, is a fact of life for Anglo-Indians.

One of the strongest continuing themes in Kipling’s writing over the years is the enduring value of work. As C S Lewis writes in hus essay “Kipling’s World” in Elliot L. Gilbert (ed.), Kipling and the Critics p. 109).

Whatever corruptions there may be at the top, the work must go on; frontiers must be protected, epidemics fought, bridges built, marshes drained, famine relief administered. … “the unforgiving minute” is upon us fourteen hundred and forty times a day. This is the truest and finest element in Kipling; his version of Carlyle’s gospel of work.

But there is little sense of this positive affirmation in these sombre verses. Noting the date of publication (April), one may wonder if the start of the hot season had anything to do with the black mood of Kipling’s piece. Its final burden is that no-one is indispensable. [A.W]

See also “Arithmetic on the Frontier” published two months later, and included in the same collection, which muses on the even more fragile existence of a young army officer on the Frontier.

As Ann Weygandt notes (p. 119), in style and mood “The Last Department” echoes the “Rubáiyát of Omar Khayyam” written in the 12th century in quatrains, a classical Persian form, and translated by the English poet Edward Fitzgerald in 1859. The sixteeth quatrain runs:

The Worldly Hope men set their Hearts upon
Turns Ashes–or it prospers; and anon,
Like Snow upon the Desert’s dusty Face,
Lighting a little hour or two–is gone.

The “Rubáiyát” was in vogue among the pre-Raphaelite circle of artists and writers, to whom Kipling was related. He mentions it in Stalky & Co. (p. 218) as recommended by the Head as ‘a poem not yet come to its own’. See also “The Rupaiyat of Omar Kal’vin” and “The Exiles’ Line”.

[Heading] We all think that the world’s twelve hundred million people (now some seven thousand million) cannot manage without us. But as the final line of the poem stresses, no-one is indispensable. [A.W.]

[Lines 7-8] nor fraud nor fools, / Nor grade nor greed. This crosswise layout connects the life and death perspective with a dense critique of the ways of officials: here Kipling refers to two common flaws (‘fraud’ and ‘greed’) that have been repeatedly portrayed in the Departmental Ditties, and relates them to their victims and purposes (‘fools’ and ‘grade’).

[Line 10] The grim Head who claims our services. This is the first instance of Kipling’s elaboration of job-related terms into death-related imagery: in detail, ‘grim’, itself evoking a ghastly, sinister and ferocious atmosphere, accompanies the capitalized ‘Head’ calling to mind the expression ‘Grim Reaper’, i.e. the cloaked man or skeleton carrying a scythe, the traditional rendering of Death.

[Lines 11-12] I never knew a wife or interest yet / Delay … decease. The poet focuses here on death’s inevitability; his ‘yet’ emphasizes the absolute lack of ‘evidence to the contrary’.

[Line 15] marigolds any of several plants of genera Calendula and Tagetes with yellow or golden flowers and occasionally the only flowers available in India in the hot weather. They have a strong characteristic smell. Yan Shapiro notes that in “A Deal in Cotton” – written twenty years later, in 1907 – (Actions and Reactions p. 176 line 10) we find: 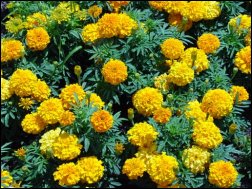 “…What flower is your honour’s ladyship commanding for the table?”

“Just ourselves?” she said, looking at the crotons in the great hall. “Then let’s have marigolds—the little cemetery ones.”

So it was ordered.

Now, marigolds to us mean hot weather, discomfort, parting, and death. That smell in our nostrils, and Adam’s servant in waiting, we naturally fell back more and more on the old slang, recalling at each glass those who had gone before.

[Line 18] Each in his strait wood-scantled office pent Pent up in his coffin rather than his former office. [A.W.]

[Lines 27-28] the mallie steals the slab / For currie-grinder and for goats the grass. As Durand (p. 6) notes, the ‘mallie’, the cemetery gardener, steals the gravestones and the very grass around the graves for his private use.

This rhetorical and rhythmic alternation accompanies the progression of the stanza: death’s suddenness and disruptive quality (ll. 29-30) first; then the silence and stillness which death slowly infuses (ll. 31-32).

[Stanza VIII] The last quatrain, while completing the previous run-on line with: ‘For You or Me’ (l. 33), reaffirms the down-to-earth professional focus of the poem: