First published in Echoes by Two Writers in Lahore in August 1884, with a sub-heading ‘Matthew Arnold”. It is listed in ORG as No 116.

The poem draws a parallel between the beleagured people of Troy, during the Trojan War, and the men that govern India.

The officers of that elite service, the ICS, lead dangerous lives, exiled from home, at constant risk of death from disease or violence. This is their inescapable lot. They know thay may suffer an unforeseen fate like Laocoön, but they hope to be spared for the sake of their wives and children. In Troy the people wait for their doom, and they too call to the pitiless gods to save them for the sake of future generations.

In the Lahore Club and elsewhere Kipling would have talked to ICS officrs, and heard something of the frustrations of their work; but although many of them were classical scholars, they might not have gone as far as the young poet in comparing their hardships with Laocoön’s doomed struggles. See the notes below for an account of the legend from which the poem takes its theme. See also our notes on “The Palace”.

Kipling left United Services College in July 1882, and in October became Assistant Editor of the Civil and Military Gazette in Lahore. See our notes on “A Vision of India” for an account of his experiences and state of mind at that time.

The legend of Laocoön

The story of Laocoön is part of the story of the Trojan War, recounted in the Iliad by the Greek poet Homer and later in the Aeneid by the Roman poet Virgil, though Laocoön does not figure in Homer’s account. 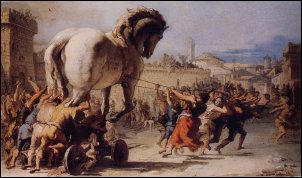 In ancient times.Troy was one of many city states in Asia Minor. The site of the city, today Hisarlik in north-western Turkey, was the scene of the Trojan War. In Homer’s classic story, after a conflict over the beautiful Helen, the city was besieged by Menelaus, King of Sparta, for ten years. The Greeks then built a large wooden horse, concealing soldiers, which they left by the gate of the city while their army withdrew and sailed away. The Trojans dragged the horse inside as a trophy, whereupon the Greeks sprang out, opened the gates, and took the city.

In Virgil’s account the Trojans were warned against the horse by Laocoön, a priest of Apollo, who is said to have coined the phrase: ‘Beware the Greeks bearing gifts’. When he offered a sacrifice to Poseidon, god of the sea (see “Poseidon’s Law”) two great serpents emerged from the waves and attacked his sons. When he went to their defence, the serpents coiled around all three and crushed them to death. The various accounts differ about the reasons for Poseidon’s hostility, but for Laocoön his death seems to have been arbitrary and unexpected, like many actions by the Gods. 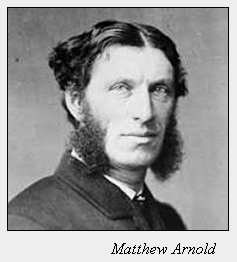 Matthew Arnold (1822-1888) was the son of Thomas Arnold. the celebrated headmaster of Rugby School, a close friend of William Wordsworth. Matthew Arnold was a well respected poet and cultural critic, of classical bent, with a somewhat pessimistic view of the world. His critical writings include Culture and Anarchy, an influential series of essays, published as a book which continued to be read well into the twentieth century.

He became Professor of Poetry at Oxford in 1857. His poems include “Empedocles on Etna”, “The Forsaken Merman.”, “Tristram and Iseult”. and “Dover Beach”.

Not until we come to Swinburne shall we find a poet who holds a place in Kipling’s literary background comparable to that of Browning and Tennyson. But there are many mid-nineteenth-century figures for whom he shows a special fondness. Arnold is one of them. He is not referred to very frequently in Kipling’s pages, but “Laocoon” shows that the younger writer had studied one of Arnold’s most distinctive forms, and further allusions prove the firm and lasting impression made on him by two of Arnold’s quatrains. The eighteenth stanza of “Obermann” seems to have been hovering near the surface of his mind in i888, for he
inscribed it on the title-page of his parents’ copy of Plain Tales

The form is the unrhymed trimeter of “The Youth of :Nature”, “Youth of Man”, “Rugby Chapel”. “Heine’s Grave”, “Haworth Churchyard”, and “Early Death and Fame.” Since all these poems deal in one way or another with the brevity of life or the certainty of death, their metre has suitable associations for a treatment of the constant threat overhanging the Indian civilian. The use of the “Laocoön” as a metaphor is a tribute to Arnold’s classical leanings.

[line 1] shadow of Death ‘ Yea, though I walk through the valley of the shadow of death, I will fear no evil: for thou art with me; thy rod and thy staff they comfort me’. Psalm 23.

[line 40] the marble snakes Probably a reference to the lifesize marble statue of Laocoön and his sons struggling with the snakes, which was excavated in Rome in 1506, and is now displayed in the Vatican. There are other versions elsewhere.