Soon after his arrival in London in October 1889, Kipling met Andrew Lang, (1844-1912), the influential man of letters – poet, reviewer, classical scholar, folklore expert and collector of fairy tales – who introduced him to other literary men at the Savile Club. Lang and Rider Haggard (1856-1925), who was also a member, were then co-operating on The World’s Desire, a romance about Odysseus.

The poem is a mischievous fantasy by the young Kipling on what might transpire if these two eminent men of letters were to be confused, on a promotional tour of the United States, by the American press, a body of men in whom – after his crossing of the continent – he never had great confidence.

He has the reporters confusing their names, questioning Haggard about legends, myths, gnomes and kelpies, as if he was the authority on folklore, and asking Lang about characters from Haggard’s tales. As some of these are set in Africa, they ask him for a Zulu dance. It all becomes too much and the partnership breaks up in a hail of bullets. 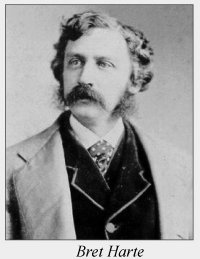 I reside at Table Mountain, and my name is Truthful James;
I am not up to small deceit, or any sinful games;
And I’ll tell in simple language what I know about the row
That broke up our society upon the Stanislow.

Harte, one of Kipling’s favourite writers in his youth, is remembered for his stories of miners, gamblers, sharp-shooters, and other colourful figures of the California Gold Rush (1848-1855).

Umsloppogas Umslopogaas is a Zulu chieftain, equipped with a lethal battle axe, who figures heroically in Haggard’s Allan Quatermain.

Cleopatra The heroine of Haggard’s novel of that name, who commits suicide by drinking poison from a golden goblet.

Theosophy centres The Theosophical Society, founded in New York in 1875 by Helena Blavatsky and Henry Steel Olcott to explore Eastern religions and philosophy. Kipling’s father Lockwood had encountered Madame Blavatsky in Simla, and described her as ‘One of the most interesting and unscrupulous imposters’ he had ever met. (
Lycett p. 111)

She Ayesha, the central figure of Haggard’s novel She, who enjoyed supernatural powers. Having bathed in a magical fire of life she had lived for over 2000 years.

Iroquois the Iroquois Hotel in Buffalo in upstate New York, where Kipling had stayed on his American tour. (The Iroquois were a notable Native American people who lived near Lake Ontario).

Krupp A product of the German armaments company of that name.