This poem first appeared in the Morning Post and other newspapers on July 17th 1935. It is listed in ORG as No 1225. Another title was “Jubilee Poem”, or “Jubilee Ode”.

The poem was written to celebrate the twenty~fifth anniversary (Silver Jubilee) of the accession of King George V to the throne in 1910, and the Fleet Review at Spithead. The Kiplings watched the Review from RMS Berengaria with Sir Percy Bates, the Chairman of Cunard, an old friend.

It describes the discomfort and general difficulties of a young officer in training at sea, short of sleep, badly treated and generally having an unpleasant time which he triumphantly survives.

Kipling and the Monarchy

The King wrote to thank Kipling for the poem. They had a cordial relationship, and Kipling had drafted scripts for the King’s Christmas radio broadcasts. He was often invited to Buckingham Palace and Balmoral. 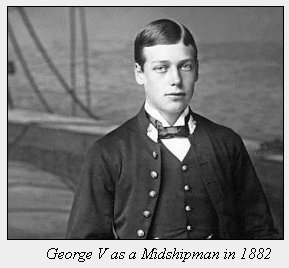 The King’s father had seen the Royal Navy as ‘the very best possible training for any boy’. In 1877, when George was twelve, he and his brother joined the cadet training ship HMS Britannia at Dartmouth. For three years from 1879 they served in HMS Bacchante, an ironclad steam and sail corvette. When the Queen expressed concern that the ship would sink and drown her grandsons, the Navy took Bacchante through a gale, from which she emerged with flying colours. 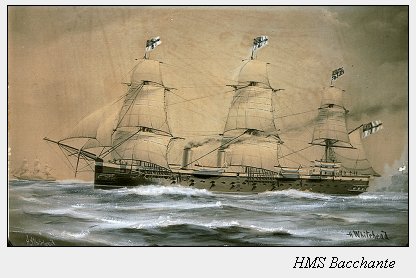 Orb a golden sphere surmounted by a cross symbolising monarchy

Crown An ornamental head-dress usually decorated with precious metal and jewels, worn by a king or queen.

wooden chest at that time an item of luggage like a chest of drawers with no legs and a top that opens to disclose a wash-stand and compartments for toilet articles. The drawers below were for clothing. Used by midshipmen and cadets who would not be accommodated in a cabin but slung a hammock wherever possible (see below.)

Gunroom in this context the mess-room of the midshipmen, cadets etc. who were too junior to be accommodated in the wardroom.

hammock in the Royal Navy a canvas, codline and rope arrangement with a mattress slung from hooks in the deck overhead, used with a blanket, for sleeping, taken down and stowed away in the daytime.

steel-grated prisons a warship is strictly utilitarian and usually uncomfortable, as the crew is accommodated in spaces not required for other purposes.

niggard In a mean or stingy manner, now rare,
though ‘niggardly’ is still in common usage.

ship’s traffic those accommodated in hammocks slung them wherever there was space, in alleyways, lobbies etc., see above.

watches in this context the periods on and off duty known as ‘watch and watch’, four hours on duty and four off with two ‘dog-watches’ to prevent the same men keeping the same watch every day.

Command in this context being appointed to command a ship.