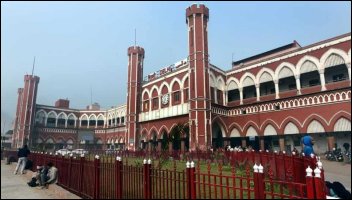 [Page 37, line1] fort-like railway station many city and main town railway stations were built and battlemented to be a stronghold in an emergency—a precaution after the Mutiny of 1857. Old Delhi railway station (right) is a prime example.

[Page 39, line 1] Sikhs A martial race; followers of Nanak and the Gurus that succeeded him. A 16th Century breakaway from Hinduism, Sikhism is a monotheistic, casteless religion. Sikhs are Jats from Punjab. Mostly farmers, they are mechanically minded too, and those who moved into the cities soon became excellent cab drivers or motor mechanics. Orthodox Sikhs do not shave or cut their hair. They wear turbans, and follow the five Ks dress rules. [Kes meaning hair; kanga meaning comb; kuchcha meaning shorts; karda meaning steel bangle, and kirpan meaning dagger.] The 9th guru, Tej Bahadur, prophesied that Europeans would destroy the Moghul Empire, so when the British defeated them before the Mutiny; they, “remembering the prophecy, remained loyal…”[Brigadier Alec Mason, in the ORG]

[Page 41, line 7] Loodhiana [Ludhiana] Sikhs Ludhiana and Jullunder, towns and areas in the Punjab. Sikhs take pride in distinguishing themselves by the areas from which they come.

[Page 41, line 29] Pirzai Kotal in the North West Frontier Province where the British fought two campaigns in 1877 against the Afridis:

Further action there in 1878 led to the Second Afghan War and the occupation of Kabul by General Roberts.

[Page 42, line 7] they had marked our dead Afghans were known to mutilate their enemy dead.

[Page 44, line 24] pan leaf of the betel nut palm. The leaf serves to wrap shavings of the areca nut, lime and catechu in paste. Sometimes other ingredients, such as fennel, are added. Pan is very popularly chewed by Hindus and Muslims.

[Page 47, line 15] Om mane padme hum a repetitious chant droned by lamas, often accompanied with the tinkle of bells. It means: “The jewel is on the lotus”, which symbolises the Buddha. Om by itself is a Hindu syllabic rune, the very sound of which invokes the mystic powers that rule the universe. Buddhists further sanctified it to the status of a universal prayer which if repeated in the telling of the rosary or with every turn of the prayer wheel becomes an intercession heard, and a hope granted.

[Page 49, line 30] “We lodge with my man’s cousin’s younger brother.” A literal translation of Indian language usage. Pinpointing the exact relationship is immensely important to Indians, and is an example of Kipling’s sensitivity and understanding.

[Page 53, line 16] summer reliefs “change of stations by units already in India, perhaps from the plains to hills stations and vice versa.” [Brigadier Alec Mason, in the ORG]

[Page 53, line 30] Wharton “perhaps the Commander at Rawalpindi. The telegrams would be one from the speaker presumably to Simla and the other to Rawalpindi, who would pass the orders on to Peshawar.” [Brigadier Alec Mason, in the ORG]

[Page 55, line 10] Sarsut a Sarasvat Brahmin from the Haryana district, Punjab, who take their name from the Sarasvati River, once a Ganges tributary, now dried up.

[Page 56, line 15] the great earthquake Kipling may have felt this on May 30th 1885 in Simla. Earthquakes were believed to be forerunners of great events.

[Page 58, line 11] three annas in copper money There were sixteen annas in a rupee, and twelve pice in each anna. The anna was nickel while the pice was copper.