“There is a tide in the affairs of men
Which, taken at the flood leads on to fortune;
Omitted, all the voyage of their life
Is bound in shallows and in miseries…”

The Kipling family was addicted to parody – see the Headnote to “How Shakespeare came to write The Tempest” and “The Coiner”.

Kipling is using this echo from Shakespeare to make the point that men may be swept into dangerous waters, but can sometimes be rescued, like Peythroppe in this tale.

[Source] Vibart’s Moralities Kipling may have been suggesting that the author was Vibart or Guibert of Ravenna, (c.1029-1100) Italian prelate, or Guibert of Nogent (1053-1124), a French Benedictine historian and theologian who wrote histories and religious treatises.

The verse, however, is by Kipling, and is collected in Definitive Verse, and in the Sussex and Burwash Editions.
‘Vibart’s Moralities’ is also given as the source of the heading to “His Wedded Wife” later in this volume.

[Title] Robert Louis Stevenson’s Kidnapped had been published in 1886, the previous year, and would have been familiar to Kipling, who was a great admirer of RLS. But there is nothing in common between the two works, except that both involved a kidnap.

[Page 129, line 1] high-caste “The artificial divisions of society in India, first made known to Europeans by the Portuguese, and described by them under their term caste, signifying ‘breed, race, kind’, which has been retained in English under the impression that it was the native name.” (Wedgwood, quoted in Hobson-Jobson, which also cites other origins.)

See “The Miracle of Purun Bhagat” in The Second Jungle Book, the verse heading to “Beyond the Pale” later in this volume, “Without Benefit of Clergy” in Life’s Handicap, “The Honours of War” in A Diversity of Creatures and many references to caste in other Indian stories.

[Page 129, line 5] aboriginal the original or native inhabitants of a country – in this context probably meaning ‘long ago’.

[Page 130, line 4] live happily ever afterwards The classic ending of many fairy-tales, where the Prince marries the Princess (or the milk-maid), but here used with perhaps just a touch of sarcasm.

[Page 130, lines 7-15] Matrimonial Department It is interesting to speculate if Kipling had Dr. Johnson’s dictum in mind when he wrote this story, or if he got the idea elsewhere and expressed it in terms that would be familiar to his Anglo-Indian audience:

I believe marriages would in general be as happy, and more so, if they were all made by the Lord Chancellor, upon a due consideration of characters and circumstances, without the parties having any choice in the matter. (Boswell, Life of Johnson, vol.2, page 461).

[Page 130, line 23] K.C.I.E. Knight Commander of the Indian Empire. A most eminent Order instituted by Queen Victoria in 1878 when she assumed the title of Kaiser-I-Hind – Empress of India.

[Page 130, line 24] hold his tongue to keep silent; possibly an echo of Ecclesiasticue 32, 8: ‘Let thy speech be short, comprehending much in few words; be as one that knoweth and yet holdeth his tongue.’

[Page 130, line 27] with one exception Kipling may be having a little joke and suggesting that he is the exception himself. This is an example of the young Kipling implying great worldly wisdom and knowledge of Anglo-Indian Society, calculated to encourage his readers to speculate on who the eleven may be.

[Page 131, line 7] d’Castries would have been a Portuguese name in origin, perhaps via Goa, which was a Portuguese colony for many years.

[Page 131, line 24] the little opal-tinted onyx at the base of her finger-nails Evidemce that she was a Eiurasian. See “The Comprehension of Private Copper” (Traffics and Discoveries p. 168 lines 1/2)

[Page 131 line 18] Gazette Extraordinary Not the Civil and Military Gazette, but a Government publication with black edges as a sign of mourning, issued when an eminent person died.

[Page 131, line 30] Rs. 175 to Rs. 470 a month Not very high salaries, roughly what engineering chargehands or station masters earned on the railways. Kipling earned Rs. 600 a month as a journalist of nineteen.

[Page 132, line 1] Commissioner a senior official of the Government of India, in charge of a Division, a group of Districts. See “Cupid’s Arrows” earlier in this volume.

[Page 132, line 6] never forgets “Pray you now, forget and forgive…” an echo from Shakespeare’s King Lear Act IV, scene vii. “I may forgive, but I never can forget”.

[Page 132, line 20] to put a millstone round his neck To take on an impossible burden. A millstone is a large and heavy circular stone with a hole in the middle, used for grinding corn. This echoes Matthew 18,6:

But whoso shall offend one of these little ones which believe in me, it were better for him that a millstone were hanged about his neck, and that he were drowned in the depth of the sea.

[Page 132, line 27] marriage in India unlike life in the United Kingdom, the British in India took their wives – not quite to work with them, but very nearly, in that they lived over the shop as it were and the wives mixed socially with the rest of the Station. See “A Wayside Comedy” in Wee Willie Winkie. A wife that was not socially acceptable would have adversely affected his career.

See also “The Honours of War” in A Diversity of Creatures, where it is mentioned that ‘Stalky’- as a young officer – had engaged in a similar evolution to prevent Elliot-Hacker marrying a Eurasian girl.

[Page 132, line 29] Mrs. Hauksbee she appears in “Three – and an Extra” earlier in this volume, and in various other stories of Simla.

[Page 133, line 6] a tonga buckets down.. a light two-wheeled carriage dashing down the dips in a hilly road.

Solon on the railway between Kalka and Simla, at the junction with the Sabathu.

[Page 133, line 7] Summer Hill on the road to Jutogh, North of Viceregal Lodge.

[Page 133, line 23] the Bikaneer breed Bikaneer (or Bikanir) was a State in the Rajputana Agency where carpets were made and the best riding-camels were bred. In Kipling’s poem “The Last Suttee”, one of the titles of the dying King Udai Chand is “Lord of the Desert of Bikaneer”.

Lockwood Kipling, in “Beast and Man in India” pp. 286/7) wrote: “By common consent the very best of the animals of the plain are considered to be those of Bikanir and Jessulmir, Rajput States on the edge of the Great Indian Desert.” Friends called the Kipling’s house in Lahore ‘Bikaner (sic) Lodge’ as it stood in a bare compound like the desert, with no shrubs or trees as they thought undergrowth brought disease. 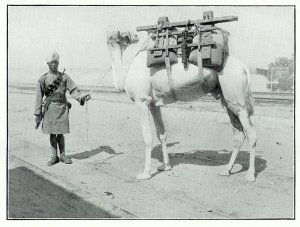 Kipling saw camels as curious and fascinating beasts. See “How the Camel Got His Hump” in Just So Stories , “Her Majesty’s Servants” in The Jungle Book, “Commissariat Camels“ in the poem “Parade-Song of the Camp-animals”, and the poem “Oonts”.

[Page 133, line 27] foot-rest chair a comfortable chair with a footrest that slid out; it was made of woven cane that permitted air to circulate round the body, There were usually circular holes in the arm-rests to accommodate a tumbler. Mostly found on the verandah but there was also a timber version aboard steamers.

[Page 134, line 1] Rajputana the pre-1949 name of the present-day Indian state of Rajasthan, the largest in the Republic.

[Page 134, line 18] Twelve-bores a breech-loading sporting-gun, so called because the calibre of such weapons is determined by the weight of circular discs of different sizes but uniform thickness that go to the ounce, so a twelve-bore would take twelve such discs accurately fitting the barrel which would have a calibre of about seven-tenths of an inch. The kick is the recoil when a firearm is fired – unlikely to cause a cut to the nose. Kipling is being ironic and his readers would understand that the man had been in a fight with Peythroppe.

[Page 134, line 23] ‘ranker’ Castries had served in the ranks as a private soldier and used language to suit.

[Page 134, line 27] ‘peg’ in this instance, a measure of spirits – possibly from the Low German pigge – a peg in a drinking-vessel showing how far the customer may drink.

[Page 134, line 28] breach of promise breach of promise of marriage. This was grounds for a legal action for damages in England or Scotland, by man or woman, abolished by Parliament in 1970 as being inappropriate to modern social conditions.

[Page 134, line 29] a very good girl from here to the end of the story, Kipling’s irony verges on sarcasm but there is a grain of truth in what he says and he does open “Beyond the Pale” later in this volume, with the words “A man should, whatever happens, keep to his own caste, race and breed.” His hero in that story disregards this advice, sound in its day, with tragic results.

[Page 135, line 9] Government House List The names and addresses of those invited to functions at Government House, a measure of one’s socia; status. (see the verse “One Viceroy Resigns.”

[Page 135, line 16] fed like humans the official Manual on Animal Management says that camels like “at least six hours grazing every day, supplemented by a little barley or gram. Although they can do several days work without food, they “will do well enough if watered every other day.”