Kipling’s ‘Preface’ to the Jungle Book is written in the style of prefaces to serious books, in which the authors thank various specialists for their help. The tone is admirable but those acknowledged turn out to be animals. The joke would hardly be appreciated by young children but would amuse adults. The page-numbers cited refer to the First Edition in which Preface is on pages v. and vi.  [Ed.] 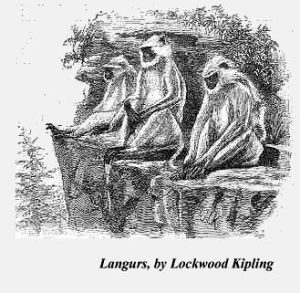 [page vi, line 1] Hindu gentleman of the old rock (‘Asiatic gentlemen’ in the American First Edition): thought to be a reference to one of the langurs, sacred Indian monkeys, who inhabit Jakko, the hill above Simla. Here and elsewhere  Kipling uses the expression ‘of the old rock’ to denote ‘elders’, loyal to the old ways and traditions.

[page vi, line 5-12] Sahi In the First English and Standard editions this sentence presents a puzzle because it can be read to include one, two or three animals and it was generally taken in the second form, with ‘Sahi’ as a member of the disbanded Seeonee Pack, although the name occurs for a porcupine in some of the stories.

The problem was resolved by Professor Karlin, who edited the Penguin Classics Edition of The Jungle Books, and favoured three animals: a porcupine, a wolf and a dancing bear. This is supported by an examination of the First American Edition which has semi-colons after ‘industry’ and ‘Pack’ instead of commas, and ‘Ikki’ for ‘Sahi’ here and in the stories. ‘Sahi’ is replaced by ‘Ikki’ in almost all places in the later English Editions but not in the ‘Preface’. The ‘infinite research and industry’ echoes the tone of serious prefaces, but also conveys a picture of the porcupine rootling about for food.

[page vi, line 16] herpetologists Specialists in the natural history of snakes, used here in a joking manner to describe a mongoose that died fighting a snake.

[page vi, line 20] Thanatophidia The poisonous snakes, from Greek thanatos, death and aphis, snake. Sir Joseph Fayrer (1824-1907) was the author of The Thanatophidia of India, and the Kipling and Fayrer families were friendly (R.L. Green, KJ 128, December 1958, p. 13)

[page vi, line 22] Empress of India In April 1892 Kipling and Carrie Kipling travelled from Vancouver to Japan in this Canadian-Pacific liner. The ‘fellow-voyager’ was evidently Limmershin, a Winter Wren, see p. 128.