[Heading] We are uncertain as to whether thisn is a genuine ‘Native Proverb’ – or one of Kiplings. [Information will be welcomed: Ed.]

[Page 168, line 5] Calcutta the largest city of India, capital of West Bengal. The seat of Government of British India, 1773–1912 except in the hot weather when the Viceroy moved to Simla.

[Page 168, line 6] Bikanir a State in Rajputania, India – the greater part of which is desert. 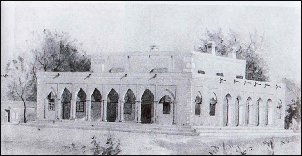 The Kiplings’ bungalow in Lahore was called ‘Bikaner Lodge’ by their friends because they had cut down the trees in the garden in the belief that they brought disease.

[Page 168, line 9] Dead who did not die reminiscent of the zombies of Haiti.

[Page 169, line 12] Pakpattan and Mubarakpur places on either side of the Sutlej River to the south-west of Lahore.

[Page 170, line 19] persuaders in this context, spurs, worn on the heels of the riding-boots.

[Page 172 , lines 6 ff] crater of sand etc Jukes is a Civil Engineer and would be accustomed to estimating measurements. If the holes were about twenty inches apart, it looks as if they would have fitted into the space available. (It is possible Kipling took advice on this point).

[Page 172, line 17] wooden drip-board Presumably cantilevered out from the face of the slope by struts driven into the sand.

[Page 172, line 31] ant-lion larva of a hunting insect of the Myrmeleontidae which digs a pit in sand and waits at the bottom for insects to fall in.

[Page 173, line 15] Martini-Henry See the notes to “His Chance in Life” [82/14] and “The Taking of Lungtungpen” [119/12] in Plain Tales from the Hills.
picket In this context a small party of soldiers sent ahead of the main body to reconnoitre or warn of an impending attack.

[Page 173, line 16] country-boat a vessel of Indian manufacture as opposed to one imported from Europe.

[Page 173, line 27] save my breath to cool my porridge a proverb quoted in A Dictionary of the Vulgar Tongue by Francis Grose (1811).

[Page 174, line 5] fakirs Hindi, from the Arabic, meaning ‘poor’. Strictly a Muslim religious mendicant but inaccurately applied to Hindus as well (Hobson-Jobson). See the note to Kim [4/14] and “The Man who would be King” later in this volume.

[Page 174, lines 9 – 14] local self-government….recognition of my presence this was the usual attitude of the Englishman in the India of the day which is reflected in much of Kipling’s writing.

[Page 175, line 7] Deccanee from the Deccan (‘south’ in Sanskrit), generally referring to the whole of the Indian peninsula south of the Vindhya mountains.
Brahmin a member of the priestly caste.

[Page 175, line 15] seldom that a Hindu makes a pun The only one that comes to mind is in Kim page 321, line 12, where Hurree Chunder Mookerjee says: “There is no hurry for Hurree.”

[Page 175, line 18] Caste-mark an indication of caste on the forehead.

[Page 176, line 15] ghât a landing-place or path to a river where the dead are cremated.

[Page 176, line 22] Armenian a native of Armenia, since 1991 a Republic situated between Turkey, Georgia, Iran and Azerbaijan

[Page 177, line 28] we three Gunga Das had one minder when they met two more men at Okara.

[Page 177, line 32] two and a half years It is, perhaps, unlikely that such a prisoner would be able to mark the passage of time.

[Page 180, line 2] bakshish a tip or bribe, from the Persian and Hindi bakhshih.

[Page 182, line 2] neither marrying nor giving in marriage an echo of St, Matthew 22, 30: “For in the resurrection they neither marry, nor are given in marriage. but are as the angels of God in heaven.”

[Page 182, line 30] the Channel passage Though it is narrow, the English Channel is often rough, and passengers can suffer dreadful sea-sickness.

[Page 183, lines 8–33] a live crow etc see J Lockwood Kipling’s Beast and Man in India pp. 32 ff. for similar instructions on how to use a crow to catch others, but not how to catch the first one !

[Page 185, line 5] the Fates the three sisters in Greek mythology who ruled mens’ lives; Clotho made the thread at birth; Lachesis measured it, and Atropos cut it with her shears.

[Page 186, line 27] Mignonette a yacht which sailed for Sydney from Southampton on 19 May 1884; she sank in a storm on 5 July and the crew – Captain Thomas Dudley, Mate Henry Stephens, Able Seaman Brooks and Boy Dick Parker escaped in a thirteen-foot dinghy with no water and two tins of turnips. They existed for five days on one of the tins and a turtle which they caught, and another nine days on the other tin. Parker drank sea-water and became unconscious. At the end of nineteen days the Captain suggested that they should cast lots for who should be killed as food for the rest. Brooks refused to have any hand in this, but the Captain ran a penknife into Parker’s jugular and the two men lived on him for five days – it seems Brooks could not resist temptation in the end. They were picked up by the Montezuma, having drifted 1,050 miles without seeing a sail.

The three survivors were landed at Falmouth and charged with murder on 8 September; on 4 December Dudley and Stephens were found guilty and sentenced to death on 9 December. On the 13th, however their sentences were commuted to six months imprisonment with hard labour.
[Information from The Historical Register of 1884.]

[Page 188, line 29] quicksand waterlogged sand that forms a pulpy mass that cannot support the weight of man or animal.

[Page 188, line 33] Protector of the Poor a form of address used by Kim when he begs or expects money for delivering a message. Here used sarcastically by Gunga Dass.

[Page 189, line 33] ‘greatest good of greatest number’ – an echo of Francis Hutcheson (1694–1746); That action is best, which procures the greatest happiness for the greatest numbers. (Inquiry into the Original of our Ideas of Beauty and Virtue 1725 Treatise II).

[Page 190, line 24] Ferenghi from the Persian farangi meaning a ‘Frank’, an old term for an European in India with a somewhat contemptuous connotation. See (Hobson-Jobson), pp.352 ff, for fuller details.

[Page 191, line 27] Vishnu In Hinduism, ‘The Preserver’, the second in the triad of Gods representing the supreme spirit. One of his human manifestations is believed to be Krishna who appears in “The Bridge-Builders” in The Day’s Work. See also “The Incarnation of Krishna Mulvaney” in Life’s Handicap.

[Page 197, line 1] gun-barrels it must have been a double-barrelled shotgun.

[Page 197, line 2] stock the wooden section of a weapon, with a brass plate on the butt which is pressed into the shoulder and can be detached from the barrels for storage, cleaning etc.