First published in Echoes by Two Writers in Lahore in August 1884, under the title “The Raiyat at Home.” It is listed in ORG as No 112.

This farmer may face chill winds, but he is content and in good spirits, sitting by the fire with his children, pulling at his pipe. His wife brings down dung for the fire, and if he over-eats and gets indigestion, the children jump on him with cries of joy. He has already kept some money in reserve against hard times or higher taxes.

Punjab had always been a prosperous farming province, and here the young Kipling paints a rosy, even jaunty, picture. Later, when he had travelled more widely, and seen more for himself, he became more aware of poverty and hardship in the Indian countryside. In 1888, in “The Masque of Plenty” he wrote of the Indian farmer:

His speech is of mortgaged bedding,
On his kine he borrows yet,
At his heart is his daughter’s wedding,
In his eye foreknowledged of debt.
He eats and hath indigestion,
He toils and he may not stop;
His life is a long-drawn question
Between a crop and a crop.

Kipling left United Services College in July 1882. In October, aged still sixteen, he became Assistant Editor of the Civil and Military Gazette in Lahore, where – with his sister – he published Echoes two years later. See our notes on “A Vision of India” for an account of his experiences and state of mind at that time. 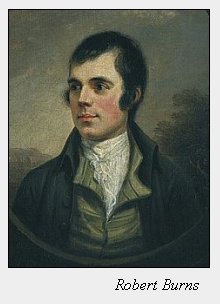 The poem has a sub-heading “Burns”. It is written in Kipling’s imitation of the Scots language used by Robert Burns, the great Scottish poet.

‘Rabbie’ Burns (1759-1798) was – and is – the national poet of Scotland. Born into a farming family in Ayrshire in the south-west, he was one of the pioneers of the Romantic movement. His poems, written in the language of central Scotland of his day, include “Auld Lang Syne”, “Scots Wha Hae”, “A Red, Red Rose”, “A Man’s a Man for A’ That”, “To a Mouse”, and “Tam o’ Shanter”.

This is an early example of Kipling’s interest in writing in different accents and dialects, which came to fruition in the Barrack-room Ballads.
Ann Weygandt (p. 71) notes that Kipling felt a particular affinity with Burns:

Kipling seems to be on easier terms with him than with any other poet whose entire life was passed within the limits of the eighteenth century – a circumstance which can be explained ·without great difficulty. Burns’s poems “date” less than any others of the age. Their author cannot be pigeonholed. Although he occasionally wrote heroic couplets, he was not an Augustan; neither was he a pre-Romantic, save in the sense that his song and ballad rhythms gave impetus to the revolt against classicism. His work had a large folk­ element in it. All these features of Burns’s writing must have appealed to Kipling, but above and beyond them all, the fact that he, “muzzy Scot” though he was, possessed the magic of the necessary word.
Several of Kipling’s references to Burns’s name can be taken for no more than instances of his verisimilitude; when such North-Britons as McPhee and M’Andrew speak of poetry, they will of course speak of Robbie.

Hoots! Toots! an exclamation of surprise, disapproval, or scepticism.

afore in front of

blethr’rin or ‘blathering’ – to talk nonsense

blathe perhaps avariant of blather ? Not traced, information will be welcomed.

loof the palm of the hand,

dung-cakes Cow dung, patted into cakes, and dried (left) , was – and is – commonly used for fuel instead of going on the land as fertiliser. See Lockwood Kipling’s Beast and Man, in India chapter 6, “Of Cows and Oxen”, from which this picture of a dung carrier comes. The cow was and is a sacred animal to Hindus.

low not traced, from the context, however, perhaps a cooking-fire.

bawbees half-pennies, here used as a general term for “money.”

day of rain a proverb “save for a rainy day” is to put money aside for a future expense.

raised assessment an increase in land-tax.