Kipling’s story of Hatim Tai recounts the efforts taken to destroy this elephant after he had killed his driver, but the description is much lighter in tone and is mainly concerned with three Doctors and a Subaltern each proffering their own preferred means for despatching Hatim Tai. The Subaltern’s proves to be the only one that is fully effective. 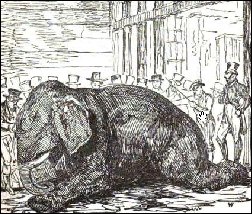 The ORG records that this story is taken from William Hone’s Every-Day Book published in 1826-27.

The relevant entry in Hone is for 9 March 1827, (volume II of the publication, p.321 ff) and relates to events in March 1826 at Exeter Exchange (better known as ‘Exeter Change’), a building on the north side of the Strand, London and now the site of the Strand Palace Hotel. A menagerie was established there on the upper floors from 1773 to 1829 in which year the building was demolished. The report relates how the elephant ‘Chunee’ was dosed with various medicaments when it became musth (dangerously frenzied), and was eventually shot with considerable difficulty. See The Everyday Book web-site.

[Page 369, line 1] Hatim Tai (see Edward Fitzgerald’s translation of Rubaiyat of Omar Khayyam which Kipling’s Head at U.S.C. had introduced him to as a schoolboy).The name “Hatim Tai” appears in the 9th or 10th quatrain, depending on the edition:

But come with old Khayyam, and leave the Lot
Of Kaikobad and Kaikhosru forgot:
Let Rustum lay about him as he will,
Or Hatim Tai cry Supper—heed them not.
[First Edition, 1859]

The Glossary in the Collins Classics Edition of 1953 says that Hatim Tai was a pre-Islamic Arab famed for his generosity.

[Page 369, line 4] Durga Pershad another elephant. Durga is a form of the Hindu Goddess Devi. There was a male elephant in London Zoo named Jung Pershad who died in March 1896. See this web-site

[Page 369, lines 12-13] ‘all the tomorrows should be as today,’ The source of this quotation has not been identified. However, Jane Keskar has found one in Shakespeare’s The Winter’s Tale which expresses a similar sentiment:

We were, fair queen,
Two lads that thought there were no more behind
But such a day to-morrow as to-day,
And to be boy eternal.
(I.ii.62) [JMK]

[Page 369, line 19] Subaltern a commissioned officer below the rank of Captain. 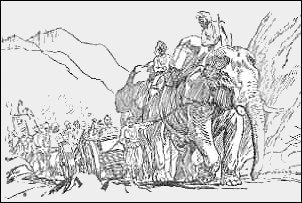 [Page 369, line 20] Horse Battery an artillery unit where the guns are drawn by horses.

In India guns were also drawn by elephants (right) and by bullocks, or carried by mules. See for example, “Her Majesty’s Servants” in The Jungle Book, and its accompanying poem “Parade Song of the Camp-Animals”).
.

[Page 369, line 29] Doon The Doon valley lies between the Himalayas and the Sivalik Hills, north-north-east of Delhi in the region of Dehra Dun and the hill station of Mussoorie.

[Page 369, line 33] Salah! As written this means honesty, but without the last letter is a term of abuse. [ORG]

[Page 370, line 2] ankus a heavy spike or goad usually used on the head of the elephant. (See also “The King’s Ankus” in The Second Jungle Book).

[Page 370, line 13] Sanderson Sahib This is George Peress Sanderson (1848-92), the head of elephant catching in India for the Army, whose career is described by Sir Theodore Tasker in KJ 180 for Dec 1971, p. 9. He was the ooringinal of ‘Petersen Sahib’ in “Toomai of the Elephants” in The Jungle Book. See Alan Underwood’s notes on the story.

Sanderson operated in Mysore and Bengal from 1864 to 1892, with some nine months in the Garo Hills catching elephants. He appears to have used the keddah system described in the story, which was less cruel than driving the elephants into a deep pit, a method which had also been used. He operated on a large scale, capturing 3000 elephants in Bengal in eleven years, with the biggest ‘take’ at one time being 136 wild elephants.

He wrote several books, including a technical manual, Pack Gear for Elephants. It is thought that he met Lockwood and possibly Rudyard Kipling. Lockwood mentions Sanderson in Beast and Man in India and refers to his ‘admirable book’, Thirteen Years among the Wild Beasts of India.

[Page 370, line 23] gur this is the sugar referred to two lines before. It is a coarse grey-brown colour. [ORG]

Patna a city on the Ganges, downstream of Ghazipur about halfway to Jamalpur.

[Page 372, line 4] Ghazipur excise opium Kipling visited the government opium factory at Ghazipur in January 1888. He described the visit in a report for the Pioneer “In an Opium Factory”, collected in From Sea to Sea. Ghazipur is on the Ganges downstream from Benares (Varanasi).

[Page 372, lines 13-18] The ORG notes that is a nice little list of the better known poisons. A little more information about the ones mentioned is given below, supplied mainly by Dr Richard Haythornthwaite.

[Page 372, line 29] Eight-bore this refers the size of the projectile fired by a sporting gun, related to the number of bullets that could be produced from a pound of lead. An eight-bore would be capable of firing projectiles of 16 / 8 or 2 ounce bullets. [RJH]

Our thanks go to Dr Richard Haythornthwaite who supplied this information and recalls seeing these massive conical cartridges as a youngster in India.