There are hand written versions by Kipling in Notebooks 1 and 3, dated 6 March 1882. The Library of Congress has a letter of Kipling’s of 9 March 1882 to Mrs Tavenor Perry, in which he says he has spent some of the time he has been incapacitated in ‘hatching out a metrical sentimentality’ which he encloses. The Baldwin Papers at the University of Sussex have a copy sent to Edith Plowden in April 1882, and she considered that it was one of the first of Kipling’s poems to show him developing a style of his own. (Andrew Rutherford p.122).

John Tavenor Perry (1842-1915) was an architect and writer on architectural history, and Pinney notes that Kipling as a schoolboy stayed with him and his family on several occasions. Rutherford (p. 12) notes that Rudyard saw Mrs Tavenor Perry as ‘a kind of mother-substitute whom he addressed as ‘Mater’ in his letters from school’. 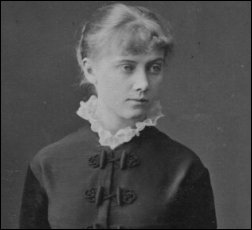 Edith Plowden (left) was a long-term family friend. Rutherford (p. 3) says she had been befriended by the Kipling parents in Lahore, but by 1880 she was in London and knew Kipling at Warwick Gardens where he spent his school holidays.

Morbid verses: pain is constant throughout life, it starts with our birth and only ends with death. The last line offers hope of lovers meeting after death.