This poem was first published in Echoes by Two Writers in Lahore in August 1884. Andrew Rutherford notes that an incomplete version in Kipling’s hand is to be found in Notebook 3, dated 6 September 1881. A complete version is included in Sundry Phansies the notebook dated February 1882, which Kipling sent to ‘Flo’ Garrard, the beautiful young art student he was in love with. See Rutherford p. 23 for details of the Notebooks. The poem is listed in ORG as No 70A.

In Notebook 3 cited above, there is a note by Kipling which explains the origim uf the poem:

In some village churches of France ancient statues are occasionally unearthed and made to do duty as Virgins and Saints. I have attempted to put down the thoughts of a bedraped Venus on finding herself another goddess.

In the poem the statue, unearthed, awakens to see sad crowds milling around her pedestal. In the old times there was laughter and love and wine and wild songs in her temple. Now she holds a cross, and – lapped in cloth of gold – is worshipped by unhappy guilty people, asking for pity, and calling her ‘Mother of Sorrows’. Where there was laughter amd revelry there is woe. 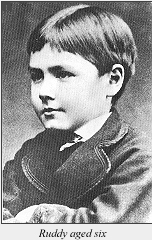 During his time at Southsea, for five years from the age of five, in what he called ‘the house of desolation’, Rudyard was looked after by Mrs Holloway, a severe and self-righteous foster-mother, who was an aggressively evangelical Christian. He had thus encountered Christianity for the first time in a particularly narrow and oppressive form.

He learned many prayers and passages from the Bible, which stayed with him all his life, but he also must have associated Christianity with guilt, suffering, and sorrow. These feelings must have coloured his imagined sense of it as a dour sad creed, in contrast to the joyous paganism of earlier centuries, or indeed of his previous life as a child in India. See “Baa Baa Black Sheep”, collected in Wee Willie Winkie, and Something of Myself pp.5/6. 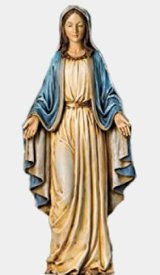 ‘Maid Divine, Mother of Sorrows, have thou pity!’ In Christian churches, Mary is usually known as the Virgin Mary as she is believed to have conceived Jesus miraculously through the Holy Spirit without the involvement of her husband. She is also known as The Blessed Virgin Mary, The Mother of God, Our Lady, and Queen of Heaven. The story of the birth of Jesus is told in three of the Gospels of the New Testament: Matthew, Mark, and Luke.

Many Roman Catholic churches have a statue of Mary dressed in beautiful robes in a prominent place. It is not unlikely that a church in a poor French parish without such a statue would reuse a suitable sculpture found locally, as Kipling had heard.

They brought me forth from under the mould The marble city had been conquered by enemies, and the statue buried in the earth, from where it was dug up many years later by the Christians who now lived there.

I, foam-born, risen from the sea In Greek mythology the Goddess Aphrodite rose from the waves of the sea. As Venus, her Roman name, she was the goddess of love, beauty, desire, sex, fertility and prosperity. There are many statues of her, perhaps the best-known being Venus de Milo at the Louvre in Paris (left) Made in about 130-100 BCE, she is thought to represent Aphrodite of Milos, the island where she was found.
See also Philip Holberton’s notes on “Mary, Pity Women”, .and “Our Lady of the Sackcloth”.