This poem was published in the Pioneer on January 18th 1889, with this heading:

(Vide Accounts of the Mississippi Disaster)
And sure’s you’re born they all got off
Before the smoke-stacks fell,
And Bludso’s ghost went up alone
In the smoke of the Prairie Belle.
Jim Bludso

It was reprinted in the Pioneer Mail on 23 January. It was unsigned and not collected, but included in Kipling’s Scrapbook 4 of his own press cuttings in the Kipling Papers at the University of Sussex Special Collections.

The Englishman, the Pioneer and the Civil and Military Gazette had all carried items on the loss of the steamer John Hanna, which was destroyed by fire on the Mississippi on 24 December 1888.

The fire was discovered about midnight; the cargo of cotton burned with fearful rapidity; and within three minutes of its discovery the vessel was one sheet of flame from stem to stern”. The pilot ran the boat ashore so that some crewmen and passengers made their escape, but others stuck in the mud and were roasted to death by the conflagration, while others again met their death on board. The pilot jumped into the water and swam to safety, whereupon the steamer drifted downstream with more loss of life.

Among those who perished was another pilot, Bob Smith, who had saved many lives in a previous disaster by sticking to his post on a burning steamer. His behaviour then, and that of ‘Bludso’ in the poem, who had

seem to have provided Kipling with his model for ‘Givens’.

The poem attacks the view propounded by Charles Darwin in The Descent of Man (1871) that man is descended from some less highly organised form of life. If life is a purely natural phenomenon, then its first law is ‘Keep a whole hide’ – save your own skin. If that is so, the poem asks, how do you explain the self-sacrificing action of someone like Givens, who gave up his own life to save complete strangers?

Interestingly, Kipling here seems to express his personal beliefs, which he very seldom does. However, it is never safe to assume that the Me of this poem, or the narrator of his stories, actually represents Kipling himself.

Though the poem has a jaunty rhythm and uses slang words like ‘funk’ and ‘diddled’, the theme is deadly serious, posing a serious question: if human life is just the result of evolution, directed by blind chance, where do our ideas of morality come from?

Kipling gives no reason for the name of his hero. It was not the name of the pilot in the newspaper reports. Assonance suggests a link with the title of “Giffen’s Debt” in Departmental Ditties (1886), about another unlikely hero who saves many lives by his self-sacrifice, but that name too is unexplained.

Possibly, Kipling is using ‘given’ in its philosophical sense: something posited as a basis for reasoning. The poem is a debate with evolutionists, and Givens’ selfless action is the basis of Kipling’s argument.

These lines are from “Jim Bludso of the Prairie Belle”, from Pike County Ballads and Other Poems by Colonel John Hay (1838-1905).

Sir, with the scalpel Rutherford identifies this surgeon, from a reference in The Descent of Man, as Dr. Brown-Sequard (1817-94), a French experimental physiologist.

Clomb old past tense of ‘climb’.

Ascidian a minute marine animal, seen as a link in the chain of evolution. Cf.
The Descent of Man, 2nd ed. p. 609:

In the dim obscurity of the past we can see that the early progenitor of all the Vertebrata must have been an aquatic animal more like the larvae of the existing marine Ascidians that any other known form.

Hell Fire’s exploded in this context, discredited, no longer believed.

Auto da Fé literally ‘act of faith’, in Spanish. The phrase refers to a sentence of death from the Inquisition, usually by burning.

No love exceeding / Death for a friend’s sake

Greater love hath no man than this, that a man lay down his life for his friends.
[John 15.13.]

love in their station commonly people love their equals. Givens gave his life for complete strangers.

Resurgat let him rise again (Latin). Many Christian tombstones are inscribed ‘Resurgam’ – ‘I will rise again’.

wheat haulm or tree If Givens is just the result of natural evolution, he can only rise again if the nutrients of his body are incorporated into vegetation. A haulm is a stalk.

The poet claims back belief in Something almighty, because Givens’ self-sacrifice proves that life is more than just physical. 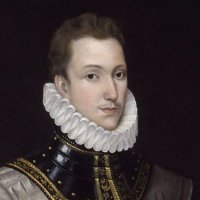 When dying of wounds, he was offered a drink of water, but passed it to another soldier, saying ‘Thy necessity is even greater than mine’.