The story was published in the Civil and Military Gazette on May 17th 1887, in the first Indian edition of Plain Tales from the Hills in 1888, and in subsequent editions of that collection. See David Alan
Richards p. 17. 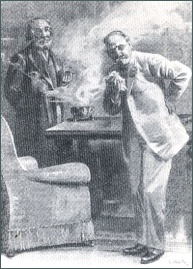 The Viceroy, a mild-mannered and subtle man, has an officious Private Secretary, named Wonder, ‘a hard man with a passion for work’, who is always interfering in matters outside his remit. But Wonder makes a mistake.

Because of a confusion of names, he sets up a meeting for the Viceroy with an obsessive inventor, who fumigates the room for cholera germs with dense clouds of black smoke. The Viceroy flees, choking but highly amused, and later tells the story against himself, and – more particularly – against Wonder. Wonder takes the hint, and resigns on grounds of health. The Germ has been destroyed.

Norman Page in A Kipling Companion [Macmillan 1984] quotes John Lockwood Kipling as saying that ‘Wonder’ was modelled on Lord William Beresford, who was Military Secretary at Simla. The incident is said to be based on a real-life happening, probably widely reported at the time, and described by Sir John Rivett Carnac in Many Memories [1910].

An officer, Major Lucie-Smith discovered a vein of coal, and tried to demonstrate its qualities at Government House in Nagpore; the result was ‘such a Fifth of November blaze that Government House, the public offices, and the new church, nearly all perished in the conflagration.’ Rivett Carnac was a friend of the Kipling family.

[Cornell (p. 125.) notes that Nagpore, the second capital of the State of Maharashtra, contains the Zero Milestone showing the geographical centre of India.]