The first publication of this poem was in the United Services College Chronicle no. 18, 28 March 1884, signed ‘by Z54 RA’ and with a sub-heading ‘An OUSC singeth sorrowfully’. It was included in the Schoolboy Lyrics section of later collections, but was not one of the poems published in Lahore in 1881 by Kipling’s mother, Alice Kipling. It is listed in ORG as No 79.

A young officer in the Royal Artillery bemoans the fact that there is fighting and much activity on the North-West frontier and elsewhere, while he is engaged on boring routine garrison duties at a fort, probably Fort Lahore.

In 1888 Fort Lahore was manned by the Third Battery First Brigade Scottish Division Garrison Artillery R. A. and a detachment of the Royal Northumberland Fusileers. During his time as a journalist in Lahore Kipling made friends with a number of soldiers, both officers and privates. He recalls in Something of Myself p. 55:

I got to meet the soldiery of those days in visits to Fort Lahore and, in a less degree, at Mian Mir Cantonments. My first and best beloved Battalion was the 2nd Fifth Fusiliers, with whom I dined in awed silence a few weeks after I came out. When they left I took up with their successors, the 30th East Lancashire, another North-country regiment; and, last, with the 31st East Surrey—a London recruited confederacy of skilful dog-stealers, some of them my good and loyal friends….

I am, by the way, one of the few civilians who have turned out a Quarter-Guard of Her Majesty’s troops. It was on a chill winter morn, about 2 A.M. at the Fort, and though I suppose I had been given the countersign on my departure from the Mess, I forgot it ere I reached the Main Guard, and when challenged announced myself spaciously as ‘Visiting Rounds.’ When the men had clattered out I asked the Sergeant if he had ever seen a finer collection of scoundrels. That cost me beer by the gallon, but it was worth it.

See “Kipling and the British Army in India” by Charles Carrington.. 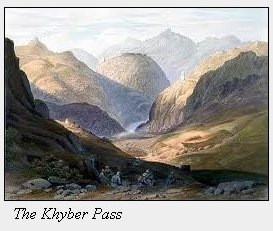 Khyber the famous pass that leads from Pakistan to Afghanistan, the classic route for invading India and the subject of many stories and poems. See Kim for ‘the Great Game’ , the secret activities to thwart the long-feared invasion by Russia.

tooth and nail fighting enthusiastically – going at it ‘hammer and tongs !’

carbine a firearm with a barrel shorter than a musket or rifle used by some cavalry regiments. Usually pronounced CAR-bin.

Kohat a town on the Afghan border.

jezail a hand-made musket – see “Arithmetic on the Frontier”.

cantonments the modern settlement at some distance from a city provided for the garrison and also the European population. Pronounced CANTOONMENTS.

Ravi one of the five great rivers of the Punjab that flows past Lahore.

mortars short cannon historically of large calibre firing bombs with a very high trajectory to engage targets out of sight of the gunner.

carronades short muzzle-loading usually iron guns of short range but vast penetrating power, used by the Royal Navy and the Royal Garrison Artillery until about the 1850s.

festive Horse Guards the poet is sarcastic; the headquarters of the British Army was in the Horse-Guards building in Whitehall in Central London, adjoining the Parade where the Trooping of the Colour takes place on the Queen’s Birthday.