[Page 64, line 6] get up an anchor by hand the usual method of weighing by hand entailed disconnecting the capstan engine, inserting capstan bars in the sockets provided for the purpose and manning them to capacity.

[Page 64, line 21] The loneliness of a Captain is society beside the isolation of an Admiral This is true to the extent that an Admiral is further removed by reason of his greater age and responsibilities and by the absence of the bond created by common service to a single ship. On the other hand, while a Captain lived alone, an Admiral was expected to mess with his Flag Captain, Secretary and Flag Lieutenant. He therefore had company, if not always companionship.

[Page 65, line 2] roost a tidal race about the Orkneys and Shetlands -a word of Old Norse origin.

[Page 65, lines 9 and 10] Admirals all an allusion to Sir Henry Newbolt’s poem of this name.

[Page 65, line 19] a Temperley transporter a mechanical means of expediting coaling, mainly fitted in a limited number of special coal barges, though a few were carried by ships. The largest installation was at Portsmouth.

[Page 65, line 25] a Prince in it was also a Flag Captain Prince Louis of Battenberg was Vice-Admiral Sir Henry Stephenson’s Flag Captain in the Majestic. As an Admiral he became First Sea Lord in 1913 but felt obliged to resign in October, 1914, as a result of totally unfounded public suspicion of his loyalty being affected by his German birth. After the war, he was promoted to Admiral of the Fleet on the retired list. He was highly regarded in the Service.

[Page 66, line 2] a Gun-room the home of Sub-Lieutenants, Midshipmen, Naval Cadets and their equivalents in other branches, in a large ship. 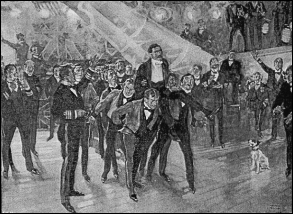 Kipling chaired after a recital on the battleship HMS Majestic

[Page 67, line 28] steal brass boiler-tubes for their boats mild steel tubes had long replaced brass in most naval boilers. If brass ones were still available for steamboats, it seems likely that a midshipman would want them for an object involving conspicuous waste, e.g., for hand-rails, rather than for their proper function where they would be doubly concealed, by being inside the boiler down below. Brass funnels were greatly coveted.

[Page 68, line 5] a dirk-scabbard Midshipmen wore dirks instead of swords on ceremonial occasions. A scabbard was sometimes borrowed by a sub-lieutenant for disciplinary purposes.

[Page 68, line 17] one could not help thinking of O’Brien when he cured Peter of the sea-sickness O’Brien, as a Master’s Mate – the equivalent of a Sub-Lieutenant in “eighteen hundred and wartime” out of pure regard for young Peter Simple, treated him to his sovereign remedy for seasickness – “a good basting”. Two applications effected a permanent cure. (Peter Simple, Chapter XI).

[Page 68, line 19] stuck a fork into the equivalent of a beam overhead “Fork in the beam”, a gunroom evolution with the object given by Kipling, had been devised in the days of wooden ships when it was possible to stick a fork in an actual beam.

[Page 69, line 21] the other term “Snotty”. It was vulgarly alleged that the three buttons worn on the sleeve of a midshipman’s round jacket were placed there – to discourage its use in lieu of a handkerchief. (for dealing with ‘snot’, or noseblow).

[Page 70, line 12] barbette strictly speaking, a barbette is a fixed armoured structure protecting the ammunition supply and most of the machinery. The Admiral was obviously on top of the turret, above this.

In early barbettes, the guns were mounted on a simple turntable revolving inside the barbette, over which they fired. Some protection against plunging machine-gun fire and spray was afforded to the guns’ crews by a thin cover level with the top of the barbette.

Later, originally in three second-class battleships and then in the Majestics, the height of the barbette was reduced and the rear ends of the guns were enclosed in an armoured box over the revolving structure. This was variously known as the hood, shield, gunhouse, barbette-turret, and finally, turret. The last has been general for years, though Kipling’s misuse of “barbette” occurs occasionally elsewhere.

[Page 70, line 12] Captains with and without aiguilettes Gold aiguilettes were worn by the Flag Captains commanding the Flagships. (Also by Admiral’s Secretaries and Flag Lieutenants, and, on state occasions, by Captains appointed as Naval A.D.C.s to the Queen).

[Page 70, line 14] laurelled globe the badge of the Royal Marines is a globe of the world encircled by a laurel wreath, with the motto “Per mare per terram”.

[Page 70, line 22] Gaspé in the Province of Quebec, near the mouth of the St. Lawrence.

[Page 71, line 7] Post-Captain A Captain, Royal Navy, carrying an implication that he commands, or has commanded, an important warship; a Captain in rank, as distinct from a more junior officer commanding a lesser ship.

When Kipling wrote, the term was mainly a colloquial and literary survival of a time when ships had been officially divided into “post” ships, to be commanded by a Captain, and others, for which a Commander or a Lieutenant would suffice. In 1898 it also distinguished a real Captain from a Commander, to whom the courtesy title of “Captain” was accorded socially, and “being posted” was still understood as meaning being promoted to Captain.

Since 1956, “Post” has taken on a new, and once more official, look. Seaman Officers – the former Executive Branch – were then divided on promotion to Commander into the “Post List”, officers considered to be specially suitable to command sea-going ships, and the “General List”, whose duties would normally be confined in future to staff duties, administration, technicalities and shore commands.

At the same time, Captains of the Engineering, Supply and Secretariat, and Electrical Branches, who had hitherto been distinguished by the suffix (E), (S) or (L), respectively, after their rank, were all made plain Captains on the General List. This proved that all the animals were equal. The simultaneous sub-division of the Seamen into the “Wet” and “Dry” Lists proved that some were more equal than others.

[The “Wet” and “Dry” list system proved unworkable, and highly contentious and de-motivating – it lasted for about ten years. Thereafter, all officers of the Seaman sub-specialisation were eligible for sea command. However, as the number of actual hulls reduced, there developed a de facto split, in that officers who were promoted late tended not to get a sea command. A.W.]

[Page 71, line 30] clinkers particles of soot and incombustible matter ejected by the boilers.

[Page 72, line 27] State-owned, State-dug coal now we have it, it would be interesting to hear Kipling’s comment.

[Page 74, line 6] thrust-block the means of transmitting the propulsive force of the screw to the hull of the ship.

[Page 74, line 23] Keyham a district of Devonport, where the Royal Naval Engineering College was established.

[Page 76, line 22] pole-masts properly, a pole-mast is a mast all in one piece, so to speak, and since the Pelorus had topmasts the term does not apply. Kipling was no doubt thinking of the bare appearance resulting from having only light yards for signalling and a minimum of rigging.